One of the auxiliary techniques I learned while I was in chiropractic school was the Graston Technique. At that time, very few people had heard about it and even fewer had ever experienced it as a patient. By now, I would say, most all of the track and field world has experienced the Graston Technique and the majority of American athletes know about it.

The Graston Technique is a manual soft tissue technique invented by an athlete named David Graston. He was unable to fully recovery from a knee injury he sustained while water skiing. In his downtime, he got to thinking about the normal manual massage style therapy in regards to his own knowledge of tools. He decided to design a set of tools to assist with his rehab. The concept of cross-friction massage, developed by orthopedic surgeon Dr. James Cyriax, was the primary concept behind the development of the soft tissue treatment protocol for the Graston Technique.

The Graston Technique is basically an instrument-assisted, soft tissue mobilization therapy. It is beneficial in breaking up fascial restrictions, scar tissue adhesions, and detecting areas of chronic inflammation and/or fibrosis. Graston has been known to help conditions such as a cervical sprain/strain, tennis elbow and golfer’s elbow, lumbar sprain/strain, rotator cuff tendinosis, and even Achilles tendinosis.

There are more than 15,000 clinicians worldwide who practice the Graston Technique. These clinicians are chiropractors, physical therapists, athletic trainers, and other trainers. Use of the technique is common in amateur sports as well as professional sports. Here is a list of teams that utilize Graston, including my hometown heroes – the San Antonio Spurs and Texas A&M University. 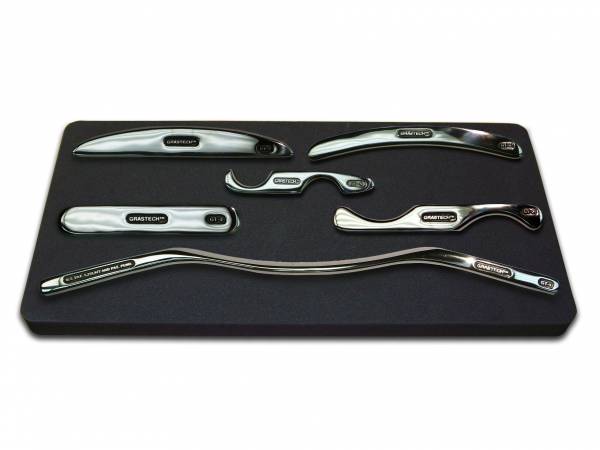 Lately I’ve practiced Graston on my clients to break up scar tissue formed in response to tendon damage and knee surgeries. Graston technicians work by utilizing one of six stainless steel tools to diagnose and treat a certain condition. Designated areas of the body use certain tools to break up adhesions, so that the healing process may start immediately.

The usual Graston protocol includes a warm up type of exercise, then treatment, then stretching, strengthening, and icing. Since I’m associated and work out of American Health Lasers, I’ve been utilizing the Graston Technique followed by a laser treatment. With this laser, healing is enhanced and pain is decreased initially by ten to twenty percent. Even with the laser, I still continue to warn people that they may experience redness or bruising in the next day or two, and they may also be sore. I instruct all of my patients to ice later that evening after treatment. Just for ten minutes.

Graston has been known to decrease treatment time and reduce a patient’s need for NSAID medication. For the doctor, Graston can aid in diagnosis while also extending the life of your hands. For those of you out there, doctors and athletes, who have not tried it, I would definitely give it a go. I find it quite useful in my practice.

Lindsey Mathews is a chiropractor who specializes in the biomechanics of the body and balancing the musculoskeletal system. She focuses on women’s health, perinatal chiropractic, and pediatrics. Lindsey aspires to create purity in pregnancy in today’s modern world and empower women to become “birth fit.”

Lindsey was born in Houston, Texas. She grew up on the river in New Braunfels, Texas. During high school, Lindsey participated in cheerleading and played soccer. While in college, she played intramural soccer and maintained her gymnastic skills while working at the Center for Student Athletes at Texas A&M. She is the proudest member of the Fightin’ Texas Aggie Class of 2005.

While on a medical mission trip to Tanzania, Africa, Lindsey decided that she wanted to enhance people’s lives in a natural way - without pharmaceuticals. Lindsey decided to become a doctor of chiropractic. She moved out to Los Angeles and completed her doctorate at the Southern California University of Health Sciences.

Lindsey worked at the International Sports Performance Institute from 2009-2012. She currently works at the American Health Lasers Los Angeles Clinic. She also owns her own business that specializes in pregnancy lifestyle coaching. Lindsey has treated numerous active people such as Olympic and professional athletes, CrossFit athletes, and CrossFit moms, and traveled the world to be on set for demanding stunts in film and television.

Lindsey practices what she preaches. She eats a paleo diet, exercises five to six times a week, gets adjusted, and takes fish oil. She currently is enrolled in and donates one weekend a month to the International Chiropractic Pediatric Association (ICPA). She is immersed in research and is relentless in her mission to naturally improve the lifestyle of women, mothers, children, and others. Lindsey lives with intention and is a proud member of Team Original.