What Is Nutritarianism and How Can It Help the Athlete?

The debate over diet seems to always boil down to vegan versus paleo, and that’s a shame. Today I’d like to introduce a variation within the (mostly) plant-based world to you – the nutritarian diet.

The discussion and debate over different dietary styles seems to always boil down to plant-based (or vegan) versus paleo these days, and that’s a real shame. In reality, there are a lot of different variations within each school of thought. I’d like to introduce one such variation within the plant-based (or mostly plant-based) world to you today – the nutritarian diet.

What Is a Nutritarian?

The term nutritarian was invented by Dr. Joel Fuhrman, author of the popular books Eat to Live and Super Immunity, to describe an eating style that focuses on maximizing micronutrient intake (vitamins, minerals, antioxidants, phytochemicals) at all times. Instead of toying with various macronutrient ratios of protein, carbohydrates, and fat, Fuhrman argues that we should make micronutrients the focus of our food choices.

The entire eating style can be described using an equation: health = nutrients / calories. In other words, a nutritarian would eat large amounts of foods that contain the highest amount of nutrients per calorie, while avoiding more calorically dense foods that only contain small amounts of micronutrients. You can take a look at the nutritarian food pyramid here for a visual representation of this eating style.

What Does a Nutritarian Eat?

So, what are the most micronutrient dense foods? There’s actually a score sheet for foods called the Aggregate Nutrient Density Index (ANDI) that Dr. Fuhrman created, and you might have seen these scores in the produce section of Whole Foods. Here’s a list of the most nutrient-dense foods, according to Fuhrman’s team.

As you can see, leafy green vegetables reign supreme, followed by other non-starchy vegetables, fruits, seeds, beans, and nuts. Animal products don’t rate highly on this list, but they are not forbidden within this eating style. Animal products are merely an option to be used in small amounts to flavor vegetable-based dishes. Fuhrman also uses the acronym “GBOMBS” as a reminder of the most potent disease-fighting foods to include in your diet – greens, beans, onions, mushrooms, berries, and seeds.

While this eating style has been primarily marketed to those interested in weight loss and longevity – and for good reason, since the focus on foods that are calorically poor and nutritionally dense has been shown to both spur weight loss while reducing cravings for calorically-dense and nutrient-poor processed foods – athletes interested in enhanced performance without sacrificing long-term disease protection would be wise to check it out, too.

The athletic benefits of a nutritarian diet include enhanced immune function, lessening of exercise-induced oxidative stress (which I’ve discussed before), and the high antioxidant levels of the diet may even prevent reactive oxygen species (ROS) produced from exercise from overwhelming the body’s defenses.1,2

What kind of special concerns should athletes trying out a nutritarian diet have?

Aside from those concerns, the main issue might be eating enough calories, but athletes could fix that issue by increasing consumption of some of higher-calorie nutrient-dense foods like avocados, seeds, and nuts. 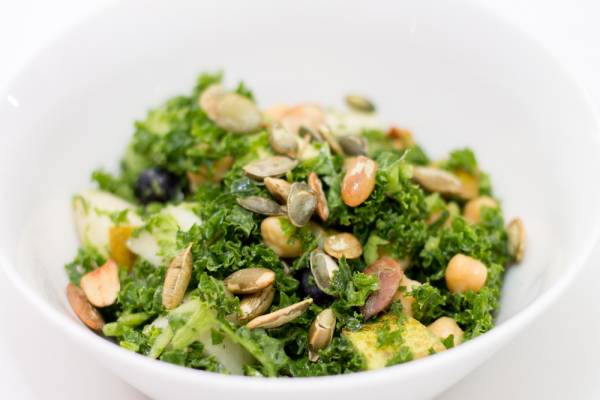 So what would a nutritarian diet look like for a high-intensity athlete?

While this may not be the optimal menu for bodybuilders (though one could argue that bodybuilders aren’t concerned with longevity whatsoever), this type of daily eating would provide athletes with high-quality fuel to power their workouts while also loading the body with powerful micronutrients to keep cells functioning at an optimal level and remaining disease-free.