What has the CrossFit Games Open meant to the rest of us? The non-elite? What about someone like me whose history of Rx’ing workouts is not long and still inconsistent?

I’ve read all the journal entries posted here by elite CrossFitters making a run at the 2012 CrossFit Games. I love reading about their two-a-days, intricate recovery programs, and strategies to be at peak performance by July. But really, the truly elite level CrossFitter represents a very small percentage that lines only the top.

So what has the Open meant to the rest of us? What about someone like me whose history of Rx’ing workouts is not long and still inconsistent? Before last year’s Open, I had not one “as prescribed” workout under my belt. I started CrossFit a year and a half ago using every band in the rainbow to get me over the pull up bar; so many, the bands alone practically catapulted me over with hardly any help from me. So when my CFLA team insisted I register for the 2012 Open, I didn’t want to.

Team CFLA considers itself a cell. The top performers are our nucleus, the rest of us insulate them in support as we do our best, too. We’re thought of as nothing less than one unit whether we’re elite or not. And though I die with pride inside over this philosophy, I feared I’d be exposed if I registered for the Open. I’m not afraid to fail at my box, but in an open forum I didn’t want my team to be perceived as weak because of my low scores or worse yet, a possible inability to even do the workouts. I was told to sign up anyway. Thank God I did.

The qualifying Open workouts ended this past weekend and I can personally attest that not only have they have meant a whole hell of a lot to many of us with no shot whatsoever at making the Games, they might have been some of the best days of my life.

Anyone who has had an athletic aspiration has probably day-dreamed of being the hero of a game. I’ve dreamed too much of being carried off a basketball court. I’ve practiced an embarrassing amount of time hitting a buzzer beater. And though I’ve had a couple good performances in my day, the actuality of being truly amazing, or being cheered for, or repeatedly patted on the back for an inspired performance had never happened like I dreamed it would.

But during this year’s Open is as close as I’ve ever come.

Every Saturday, our team gathered at the gym to do the workouts, as a unit. We ritually chant and dance pre-workout and post-workout. Shoot, some of us dance during workouts. I have that part down pat. In fact I asked Coach Kenny Kane last year if I could use my salsa dancing skills as a down payment to make the team. He accepted. He said spirit is as important as anything else on a team. He gets you that way.

What also got to me was every word of encouragement I was given. Every pat on the back energized me. When the top athletes embraced me as a teammate no matter my performance shortcomings, I felt titanic loyalty to work as hard as I could. I couldn’t score us points to get us closer to the Games, but I could give them the one and only thing I had to offer, and that was my all. It turns out, that’s inspiring too.

Going into the 12.2 workout, almost everyone knew I had never snatched 75lbs before. I even attempted it and failed during the warm up before my heat. I let go of any expectations to get past 45lbs. After the workout started and after I did get past 45lbs, I stared at the 75lb bar. A few people came closer. My first attempt was a fail. Interestingly, my embarrassment started to dissipate because really, it just was what it was. The dread that had pooled in my stomach during the days before the workout and during the warm up dissolved.

Then my husband showed up, having rushed from work to support me, and more people gathered around because apparently I was close with my first attempt, and then Coach Michael crouched near me, and then DMX came on over the speakers. Within the sensory overload I found an odd calm. The pulsing of the music, people yelling, my own thoughts good and bad all faded. I was on stage and the experience turned visceral. Doubt floated away and all that was left was me and the bar and the ability I had at that exact point in time. I could only hear certain words being shouted at me. 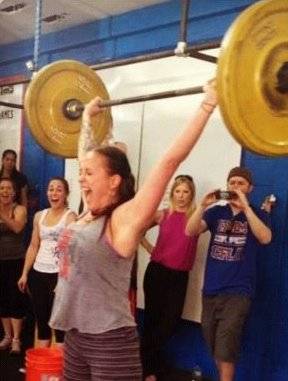 And jumping and getting under it is all I remember doing until the bar got overhead and everything then went off mute and what seemed like the entire gym went into an uproar. My eyes were squeezed shut – my heart exploding – and the weight of the bar was nothing; it felt held up by everyone else in the room.

I have played those seconds over and over in my mind, when the bar got up over my head. That perfect feeling of triumph was so full-body and surprising, I nearly fainted when I released the bar back down to the ground. And it went like that four more times. Four times of jump, get under it, CHEERS and extreme flashes of accomplishment. When the last second ticked off the clock, my team came over and huddled around me crying from my experience too.

Because really, it’s all any of us can do: give our all whether we’re at the top of the leader board or only able to report a few reps. Being able to squash doubt and give everything is the highest thing we can hope for. And that’s recognizable at any level.

None of the other workouts came close to the 12.2 in terms of heightened emotions, but the rest of the Open went very similarly for me. I PR’ed during every single workout. Coach Kenny said, “Watching what you did and what Logan or Zach did (our top athletes) was interchangeable. Both performances were amazing.” I can’t even tell the team enough how much it all meant to me, and how the support from the elite to my fellow everyday athletes took me to a different level physically and mentally. I can only repay them by keeping at it. It’s still all I have to offer them.

That, and a couple dance moves.