It’s nearly impossible to think straight when you’re hungry, and cravings can cause you to make food choices you’d never make on a full stomach. It’s when you’re hungry or craving something that you end up eating a whole rotisserie chicken, an over-large plate of pasta, or that double, double hamburger that looks so tempting. It’s all about finding foods that shut down your appetite while also filling your stomach.

According to a new study out of the University of Copenhagen’s Faculty of Science, two of the best foods to eat are beans and peas. Danish researchers gathered 43 men for a study, serving them three different meals with either bean/pea-based patties or veal/pork-based patties. The participants’ hunger levels were analyzed, along with their caloric intake at the next meal.

The study found that those who ate meals rich in the plant-based proteins ended up eating 12% less at their next meal. More fascinating was the fact that the participants were recorded as saying they were as satisfied with the legume-based meals as the meat based one.

It’s a well-known fact that meat is highly satiating. Not only does the high protein and fat content fill your stomach and occupy your digestive system for hours, but the umami flavors of meat are among the most satiating to your appetite. Meat-heavy meals are guaranteed to stop you from being hungry for hours.

But according to this study, plant-based proteins like beans and peas (no doubt lentils, chickpeas, and other legumes as well) are equally satiating. The participants reported feeling as satisfied after eating the legume-based proteins, meaning that meat-protein wasn’t the most important requirement for satiety and fullness. As this study proved, fiber-rich foods can be just as satisfying as meat-heavy dishes. 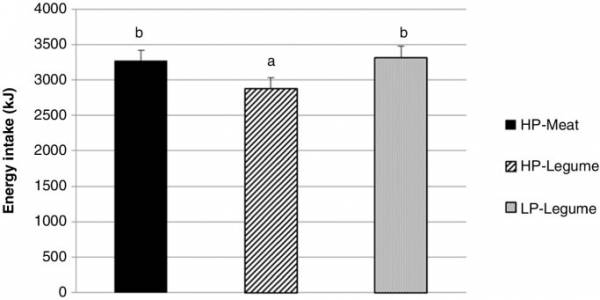 This benefits us in two ways:

1. It provides us with more fiber, which is excellent for our digestion. Legumes are rich in both soluble and insoluble fiber, which will absorb toxins, sugar, cholesterol, and fats while also cleansing our digestive tract. More fiber is always recommended.

2. But, it will also provide us with a lower-fat, more sustainable form of nutrition. Meat production has a greater environmental impact than the production of legumes. By switching to legume-based proteins, we can get the same full feeling, all the while reducing our environmental footprint.