Is your snatch or your overhead squat bigger? Does it matter? Olympic weightlifters don't even bother with overhead squats. Read on to find out why it's not that helpful after all.

I got a text the other night from a drunk lifter of mine who was in the middle of an argument with a bunch of his CrossFit friends. He asked, “Is your snatch or your overhead squat bigger?” I responded, “I have no idea.”

“Oh,” he said, “because we’re arguing about which is usually bigger.”

After the obligatory giggle regarding size, and how much it matters, I said, “That depends. Overhead squat if you’re not a very good lifter, snatch if you are.” That seems to ring true most of the time (or close enough) and we were texting, so I didn’t want to write him an entire article on the subject.

I did find his question rather serendipitous, though, because I’d just had another discussion about the relevance of the overhead squat to your snatch and I think that’s what was at the heart of the argument he was having. No one cares which is bigger. They do care about the following question:

Is doing the overhead squat – as a standalone exercise – going to make me a better snatcher?

The short answer is: Unless you are a rank beginner and are seriously lacking core strength, probably not. But there is a longer answer that bears explaining. First, though, lets figure out why one would ask such a question in the first place.

Overhead and Out of Mind: How Myths Are Made

These are the two arguments that are made the most often for why you should be using the overhead squat to increase your snatch:

Both of these are wrong. But they stem from valid concerns, and I can understand why you might think them true at first blush.

The Analogy is wrong because it assumes the overhead squat’s strength building benefits will affect the snatch in the same way the front squat’s strength building benefits affect the clean. That assumption is false. The front squat functions as a primary strength builder for the muscles in the legs, hips, and back. The overhead squat functions as a primary builder of core strength. (Yes, both exercises are compound and affect a wide range of muscles, as well as the nervous system, but we need to focus on their primary purpose since it is those reasons why we’d choose them over something else.)

NOTE: If you can clean your best front squat, you can snatch your best overhead squat. The opposite is rarely true. That fact may help you understand the above argument a little better if you are having doubts.

Who Is Scared of a Little Snatch?

The Analogy is the boring argument for overhead squats. The Confidence Booster is much more interesting, has far more merit, and brings up the most important fact about weightlifting: it is a mental sport first, and a physical sport second. If you have the ability to snatch a light weight with perfect (or near perfect) form, then you have the technical ability to snatch a heavy weight with perfect form. The trouble is you won’t. And the reason you won’t is because heavy weights scare you and light weights don’t. 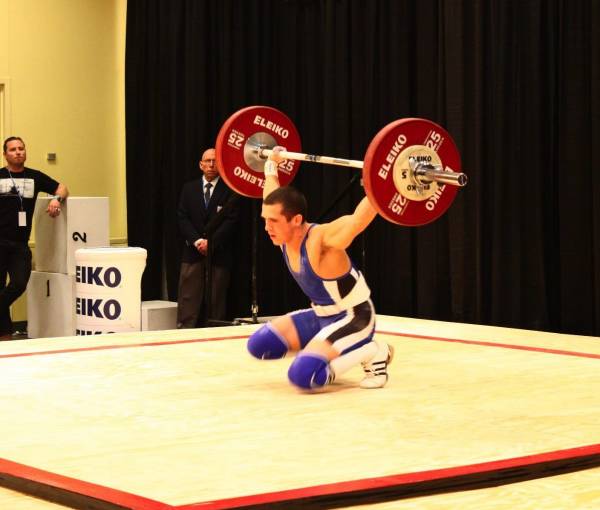 You pull the bar off the floor and it feels HEAVY. This causes some small part of your mind to worry that it might be “too heavy.” It isn’t. But you THINK it is. Panic sets in, and in that nanosecond of time, that minuscule space in which you have the chance to make a choice, you make the wrong one.

Your fight or flight response is activated and you buckle. All of the time and energy you spent drilling your form and technical skills goes out the window. You look as though you have never snatched a day in your life. You make a mistake (maybe many mistakes) that you KNOW are wrong, have fixed at light weights, and thought you were past.

But you never fixed your greatest flaw: your inability to control your fear.

All it takes is the smallest amount of self-doubt to ruin your snatch attempt. The faintest spark in a dry forest can light a monstrous fire that grows out of control and takes over your mind, causing you to lose all confidence in your ability to lift that son-of-a-bitch.

Overhead Squats to the Rescue?

Clearly, if we could just overhead squat far more weight than we could snatch then we would finally have the confidence to go for it, right? We wouldn’t have to overcome our fears because we wouldn’t have any. We’d KNOW that so long as we could pull that bar into position, then we’d be able to catch it, stand up, and slam that bar back down to the platform in a triumphantly loud display of awesomeness.

Man, that sounds good. But it is so wrong.

In Why Don’t Olympic Weightlifters Overhead Squat? Part 2, you’ll learn all about the four scariest phases of the snatch, why the overhead squat has nothing to do with them, and how to overcome them scary bits so that you can add even more kilos to the bar.