When I was doing my fair share of boxing, conditioning was a big part of our practice. Unless you count the jump rope, we had exactly one piece of fitness equipment at the boxing gym – medicine balls.

With a daily regimen of boxing, road work, and training with the med ball, I got myself in the best shape in my life. While medicine balls might look like a toy, they can also kick your butt and be an effective training tool. Why then doesn’t the medicine ball get the attention and respect other training tools do?

The Medicine Ball in the Corner

Over the last twenty years, people have fallen in love with suspension training, kettlebells, and Bosu balls, while the poor medicine balls has stayed in the corner of the gym, collecting dust. Maybe that’s a bit of an overstatement, but the medicine ball certainly doesn’t get the love that its cousins the dumbbell and kettlebell get.

To be fair, this is somewhat justifiable – you aren’t going to win a bodybuilding show training with just a medicine ball. There is simply more resistance capacity possible with a dumbbell or even kettlebell.

Still, training with a med ball, as I have learned both personally and professionally, works. The med ball is fun, functional, and it travels nicely. Put it this way, if I were stuck on a desert island and could bring one piece of fitness equipment, my choice would be the medicine ball.

Once children are old enough to stand and walk, one of the first things they pick up is a ball. People like to play with balls. The great thing about balls is they aren’t just for playing. They are great for getting fit and rehabbing injury as well.

In the modern era of fitness, the trend has been towards functional fitness. But those of us who’ve been in the business for a while have figured out that training should be fun, otherwise people don’t tend to stick with it. Three sets of dumbbell bicep curls equals not fun. Whereas med ball slams or passes with a partner equal both fun and functional. 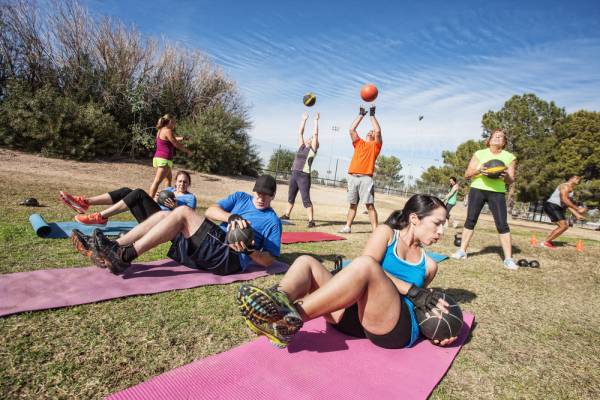 The History of the Medicine Ball

Yes, playing with a ball – training with one, throwing one, and playing sports with one – is in our DNA and has pretty much been around since the beginning of time. Use of the medicine ball dates back to ancient Greece and before. Bladders and animal skins filled with sand were used for both training and rehabilitation therapy. In the nineteenth century, the word medicine became synonymous with health and the weighted training ball was used for promoting health. Thus, the ball earned the moniker, medicine ball, which it’s still known by today.

The medicine ball was once considered one of the four horsemen of fitness equipment along with dumbbells, Indian clubs, and weighted wands. While the medicine ball isn’t perhaps as widely used or versatile as a dumbbell or kettlebell, med balls have again gained popularity in recent years. People want innovative and functional ways to train and med balls fit the bill.

There are now many different types of med balls beyond the old-school leather and hard balls that you find at a boxing gym. These days there are slam balls, sandballs, and tornado balls as well. There’s a ball for every imaginable exercise purpose.

Why the Medicine Ball Works

Working balance, strength and stability, the alternating med ball push up is perhaps the most effective way to do a push up. You can also work power with a med ball push up by exploding off the ball.

This includes pikes, twists, sit ups, toe touches, and more. If you want core training in a big way, look no further than the med ball. As exercise scientists and physiologists know, the best way to build, tone, and sustain lean muscle is via resistance. Why then do so many people insist on doing hundreds of crunches at warp speed?

While your core musculature consists of smaller stabilizing muscles, those muscles still need resistance when you train them. That said, you need to train smart with your core and not overload the spine. Skip the weighted ab machine at the gym, and get yourself a ten-pound med ball.

The Final Word on Medicine Balls

The medicine ball might not get the praise and respect it deserves, but it isn’t going anywhere. It’s a tried and true fitness tool, for almost 3,000 years running. It’s not a fitness fad! In short, I like the med ball. Besides water, my girlfriend, and my Bob Marley music collection, the med ball would be next on my list if I were to be stranded on that desert island some day. If you aren’t using the med ball, get one today.