Why Modern Running Shoes Are Terrible

Footwear that focuses on style and marketing isn't helping your foot function as designed.

‘The shape of the foot conforms to that of the shoe’

Modern footwear is largely focused on style, rather than the function of the human foot. Choice of shoe is a hugely important task, as this determines how our feet will function both in and out of them.

‘The shape of the foot conforms to that of the shoe’

Modern footwear is largely focused on style, rather than the function of the human foot. Choice of shoe is a hugely important task, as this determines how our feet will function both in and out of them.

To understand what makes a good shoe, we must first understand the shape and function of the human foot. In humans, the foot supports us during locomotion and usually directs our bodyweight forwards. Therefore, the wider and flatter the foot, the more support.2

When walking, the gait cycle usually begins with a heel strike, then travelling through the foot ending with the toe-off phase, with an inverted pendulum mechanism. During running, a spring mechanism takes over,3, 4with forefoot or mid-foot landing, followed by the toe-off phase.5

During this toe-off phase is when the hallux (big toe) must press into the ground, halt foot pronation and direct the body in the sagittal plane. Any valgus of the hallux may compromise this function and shift the load elsewhere, usually out to the sides.2

This can potentially cause knee valgus, pelvic twisting and additional pressure on other joints, and is usually seen in the foot of the trail leg splaying out to the sides.

Restricting the hallux using a splint has been observed to reduce single leg performance.6 Considering that running is a single leg activity, this finding is rather significant.

Poor footwear essentially mimics the effect of a splint, creating a dysfunctional foot that is no longer capable of support or directing bodyweight during locomotion.

Even during standing, the hallux presses into the floor and exerts twice the pressure of the remaining four toes, if it functions correctly.6

Distance between the hallux and second toe is also key in optimal human foot function (see Fig. 1). Shod runners have been shown to possess a 6.28mm and 5.39mm distance in men and women respectively, while barefoot runners displays distances of 23.73mm and 19.38mm in men and women.7

This hallux adduction helps give the foot width, and provides an optimal angle to function correctly by providing greater leverage to halt foot pronation. Simple observation shows that the barefoot runner’s feet provider a wider base of support than that of shod runners.

What Makes Running Shoes So Bad?

Many running shoes now have features that work the polar opposite of anatomy: narrow toe boxes, high toe/heel drops, thick and cushioned soles, and a toe spring.

Narrow toe boxes do not allow correct hallux function, squeezing the toes together and essentially shutting down the foot’s ability to direct bodyweight. When this happens, other tissues will have to compensate for the ineffective hallux.2Fig. 1 beautifully shows the differences between shod and barefoot runners for a visualisation.

Toe springs, identified by elevated toes of the shoe, take away the foot’s natural ability to absorb, store and release energy. The naked foot’s spring action returns about 17% of the energy from each step.4

When that mechanism is hindered, other tissues are once again needed to compensate, and the next available spring is the Achilles tendon. Toe springs in shoes might sound like an advantage, like these shoes are helping us run faster and for longer.

However, due to shoes taking away these functions, our feet are becoming unable to perform their natural roles, causing muscles to atrophy and connective tissue to become fibrotic.

Cushioned shoes are thought to interfere with the body’s ability to change from an inverted pendulum (walking) gait to a spring gait (running), and create rear foot striking.5

During walking, the heel lands first. Ground reaction forces (GRF) travel through the first point of contact and provide information as to how hard the heel is striking the ground. Once these GRFs increase, the risk for injury increases, and the body reacts by changing to a running gait.

Adding cushioning to the heel dampens this feedback, increasing the speed at which you can run with a heel strike. Again, the effect is that additional tissues come in and compensate for this alien running technique.

Reversing the effects of years of anatomically incorrect shoes is not an easy task. [Photo credit: Pixabay]

The Problem with Poor Footwear

The biomechanical differences between shoes with different toe/sole drop are substantial. Comparing shoes of 0mm and 8mm drop, a 4.2° increase in foot-ground angle (the acute angle of the foot relative to the ground) was observed during the touchdown phase of running.9

In other words, the more the heel is elevated, the more one will land heel-first during running. This tendency to land on the rear foot or heel strike may also explain the decreased knee angle at touchdown.

The negative effects of shoes can also be observed in a very short amount of time. Hallux valgus and deformation has been observed in habitually barefoot teenagers in a mere 6 weeks after wearing shoes. In adults, hallux valgus may take as long as two years to correct with barefoot shoe use.2,10

The feet appear to quickly morph to the shoes they are encased in, and these effects may be easier to resolve at a young age.

What You Can Do About It

As previously stated, a cushioned sole is likely to interfere with the foot’s natural function and sensory feedback,2as well as contribute to this increase in heel striking tendencies.5

This transition shoe(s) should slowly move in the direction of barefoot running by featuring a reduced heel/toe drop or wider toe box.

Reversing the effects of years of anatomically incorrect shoes is not an easy task, but the younger you start this process, the easier and faster it will be. An ideal place to start could be a barefoot policy in your home. The end goal is to achieve a foot similar to Fig. 1B rather than 1A.

Self-myofascial release of the foot spring can be beneficial, specifically the plantar aponeurosis, Achilles tendon, tibialis anterior and soleus. Any tissue that is compensating for another is likely locked in a shortened position.

Coaxing these tissues to full function and increasing the neural pathways to lesser active (locked long) tissues of the foot may improve the overall function, strength and movement of your feet.

Proper running shoes must have a wide toe box to allow the toes to splay out and encourage distance between the hallux and second toe. They should have zero toe/heel drop to allow the feet to function correctly, and feature a thin, non–cushioned sole that will not dampen feedback from the ground.

While no shoe compares to the effects of barefoot running,8,11a shoe that interferes as little as possible with the natural form and function of the human foot while providing plantar protection against puncture injury is the most beneficial.

This article has been written regarding running shoes. But this information can also be applied to nearly every type of shoe for every occasion from running to black tie events.

All modern shoes appear to feature similar defects to running shoes, such as narrow toe box, elevated heels, toe springs, and so on. Barefoot shoes, though they are an oxymoron if there ever was one, are increasing in popularity, which means an increase in availability. Take these points into your next shoe purchase may just put you on the path to getting your feet back to full strength. 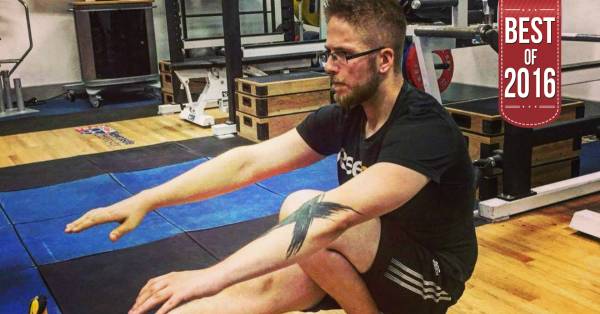 More on anatomy and impact forces:

1. Hoffmann, Phil. “Conclusions drawn from a comparative study of the feet of barefooted and shoe-wearing peoples.” American Journal of Orthopedic Surgery 2, no. 2 (1905): 105-136.

3. Bolgla, L. A., & Malone, T. R.Plantar fasciitis and the windlass mechanism: a biomechanical link to clinical practice.Journal of athletic training,39(1), 77.