Why Swimming Is the Best Exercise For Pregnant Women

As a pregnant woman, what if you could relieve morning sickness and joint pain, and have a sense of well-being all because of one activity? Well, then it’s time you try swimming.

Exercise during pregnancy can be a sensitive subject with plenty of argument for and against. Gestation could be considered a workout in itself, and nowadays, with different forms of exercise more popular than ever before, more and more expectant mothers prefer not to significantly alter their exercise routine by virtue of being pregnant.

While many forms of exercise are commonly considered too aggressive and therefore not recommended during pregnancy, swimming on the other hand presents a very unique profile compared to most other regimens. Often considered a very low impact sport, swimming offers expecting mothers a safe means of exercising as the water partially supports weight, decreasing burden on spine and limbs. When asked about swimming during pregnancy Dr. Steve Lebder of Premier Gynecology and Obstetrics in Louisville, Kentucky vehemently stated, “It’s good to do. Bottom line. Exercise is good for pregnancy.”

As swimming is concerned, no big adaptations need to be made to accommodate the growing belly or increased safety. Swimmers can retain the normal activity level, as they get accustomed to their new body. The precautions to swimming are no different to exercise in general. Staying well-hydrated and exercising care to stay within a heart rate of 120 to 140 (to avoid overexertion) are the main recommendations. No one particular stroke is safer than the other, but while swimmers may continue to perform turns in their workouts, diving is out of the question during pregnancy. You often hear that you should avoid swimming in chlorinated pools during pregnancy. According to Dr. Lebder, however, “Chlorine is a very good disinfectant. There is nothing wrong for a pregnant woman to swim in a pool treated in chlorine.” Ultimately swimming during pregnancy increases maternal aerobic capacity and provides expecting mothers with a sense of well-being as well as relieving morning sickness. 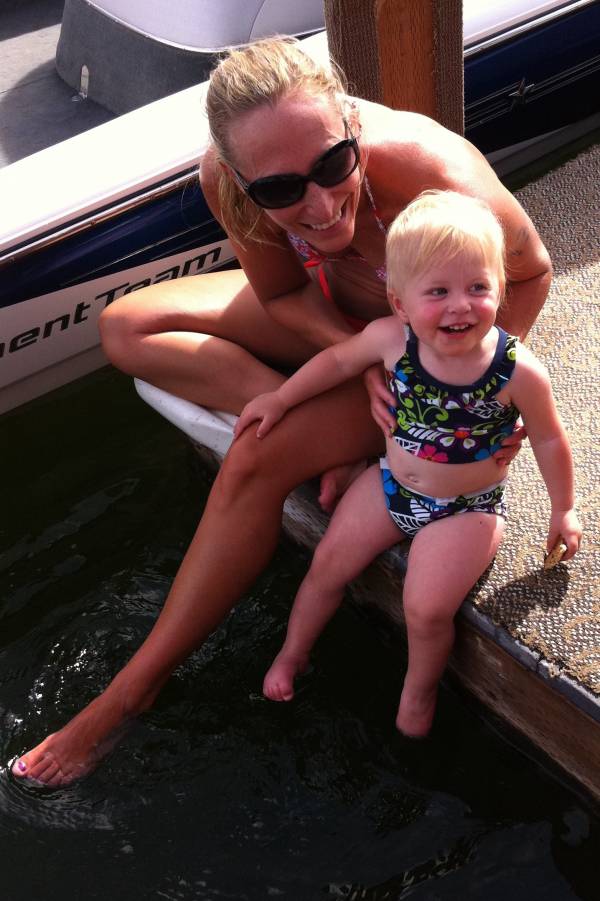 Kristi Lee, a 36-year-old from Idaho, gave birth to her daughter, Nadège, nineteen months ago. Kristi is a very avid swimmer and a member of USMS (United States Masters Swimming). Kristi swam during her whole pregnancy, and remarkably competed at USMS Nationals in Atlanta in 2011 while pregnant, swimming the 50, 100, 200, 500, and 1650 yards freestyle and the 100 butterfly. She also swam the 5k, 10k, 3000, 6000, and 1 hour postal swims while pregnant. Kristi even won a silver medal in the 1650 yards freestyle in Atlanta in the 30-34 year old age group.

Kristi’s routine didn’t change significantly after finding out she was pregnant. She swam six days a week, though towards the later part of the pregnancy her usual interval times became more challenging. At that point she relaxed on the times expected for herself. Her lung capacity also decreased, which she adjusted by ignoring breathing patterns and hypoxic sets. As a true athlete, Kristi didn’t miss a workout, including the day she eventually gave birth to her daughter. Nadège was born one week late at a very healthy 8lbs 9oz and 21.5 inches long. Kristi received the go ahead to get back in the water three weeks post partum. She went on to swim at USMS nationals nine weeks after giving birth. Swimming helped Kristi remain sane. She shared with me, “I hated being pregnant, and being in the water was the only time I felt like myself.”

Natasha Bertschi and Jane Dwyer from Australia recently competed in a triathlon at thirty-four and twenty-nine weeks gestation respectively. This is not the first pregnancy for both women, and for Natasha, at the age of 33, the drive to exercise comes from a desire to attempt natural delivery after having previously undergone an emergency Cesarean section. Regular exercise has helped Natasha with pregnancy tremendously especially by keeping her weight 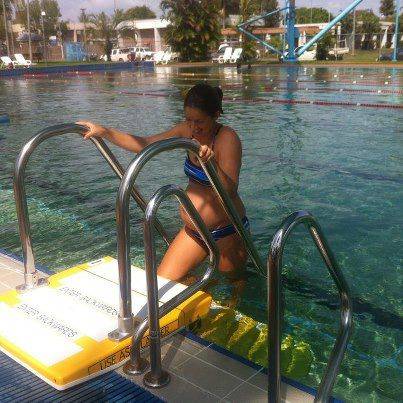 down. During her first trimester swimming was a chore and often she couldn’t handle more than thirty minutes of activity. “As soon as I entered the water, the nausea was instantly relieved and I felt human again. Even if for only the thirty minutes I could manage.” Past sixteen weeks Natasha felt remarkably better, noticed an increase in energy, and now swims five days a week. In addition she also rides her bike 5-8km three to five days per week.

Débora Diegas of São Paulo, Brazil was pregnant with her first child at age 35. With a past in beauty pageants and having competed in Miss Brasil, Debora used swimming and CrossFit during pregnancy to stay in shape and feel sane. While never a swimmer before, Debora used the water as a means to exercise because it felt safe and comfortable. Like the previously mentioned women she felt the amazing power of the water. She felt comfortable, strong, and without morning sickness was gone. Swimming created calm moments for the developing fetus. Débora gave birth to a healthy boy, Cauá, who is now a year old and quite active. While swimming no longer takes a prominent stage in Débora’s life, she has started to CrossFit competitively post partum.

The consensus from the real stories of these women is that the people who surround them consider them inspirational role models and responsible mothers. Their pregnancies resulted in extremely healthy children and helped the mothers not only remain healthy themselves but avoid some of the most dreaded “side effects” of pregnancy – the uncontrollable weight gain, lethargy and morning sickness.

So the take home message is: