Watching an athlete choke can be one of the most difficult, and at the same time, engaging moments to witness. Like watching the scene of a car accident, we just can’t look away. What happens to athletes in these moments?

In this article, we will discuss overthinking in high-pressure situations, a problem common to many, and what you can do to get past it.

The Pressure to Perform

Chuck Knoblauch was an outstanding baseball player in the 1990s. He won Rookie of the Year” and multiple Gold Gloves (outstanding defense). Because of his excellence, he was offered a lucrative contract with the Yankees. Playing for the New York Yankees can bring a good deal of scrutiny and pressure. Under this pressure, Knoblauch began having problems with his throw to first base. Balls would sail over the head of the first baseman. He had thrown to first base thousands of times in his career, but the more pressure in the game, the more he seemed to “forget” how to throw.

Knoblauch is not the first and probably not the last player this has happened to. Tennis players ‘forget’ how to toss the ball up in the serve. Basketball players clank free throws off the back of the backboard. Quarterbacks throw passes that sail off into the air. Soccer players kick empty net goals over the top of the goal. All of these players seem to ‘forget’ how to do movements they have done thousands of times before. If you have ever thrown a ball in the dirt or completely clanked a free throw, then your explicit processing overruled what you know how to do naturally.

We often learn a task by telling ourselves what to do. In the squat, I think about knees tracking out, butt going back, shins perpendicular, and opening up the hips on the way down. The explicit directions help me learn the movement. Over time, we use these thoughts less and less to guide and control our movements. Movements become implicit or procedural.

“In a situation where we choke, we overthink what we are doing. We try to use explicit processing for something we know implicitly. Thinking gets in the way.”

In previous research, I examined implicit and explicit learning and the networks they activate in the brain. My colleagues and I had people tap keys that corresponded to the color appearing on the screen. The colors appeared in a twelve-digit pattern on the computer (a really boring video game). Because the pattern was long, people did not recognize that the pattern was repeating.

However, participants’ performance got faster and faster over time. The brain began to recognize the next step before it appeared. This processing is done by an area of the brain known for subconscious processing of memory. Another group of people who more aware of the repeating pattern tended to think more explicitly or out loud about the pattern. They were awkward in their learning and learned the pattern slower.

When Thinking Gets in the Way

When we devote conscious resources to a muscle memory task, we are much slower at processing it. It is helpful thinking about the task at first, but when you are advanced at the task, thinking gets in the way. Have you ever tried typing on a keyboard while thinking about the location of the letters? It slows you down.

Imagine doing an Olympic clean movement and thinking about the steps involved. You can’t think as quickly as your body can move. When I teach the clean to beginners, I start them in the power position and tell them to jump with the bar. Most people already know how to jump, so by doing something they recognize they are able to do the movement. We can then add in more complexities over time.

In a situation where we choke, we overthink what we are doing. We try to use explicit processing for something we know implicitly. Thinking gets in the way. We become conscious of patterns that are best served on automatic pilot.

What Is At Stake?

A 2012 study in Neuron examined how reward affected performance. The researchers placed individuals in a fMRI scanner to play a video game where they hit a ball into a hole (sounds a bit like golf). Initially, incentives helped people perform better on this fine motor task.

However, as the subjects improved at the task, higher incentives seemed to reduce task performance. That is, when the shot was worth a great deal more, people tended to choke. The participants became focused on not wanting to lose. Activity in areas of the brain that support the implicit memory system were less active. Areas that focus more on explicit memory became more active. Basically, when the reward was higher, people wanted to work harder to avoid losing. Working hard means putting more resources forward, which engages more conscious processes.

How to Overcome Choking

Sometimes we think we are choking, but the problem is actually that we don’t have the full implicit process ingrained in memory. A great example is double unders with a jump rope. I have seen many people “have them” only to “lose them” on a later workout. If you haven’t done tens of thousands of double unders, it might be that you don’t “have them” completely in unconscious memory. Until you have mastered a skill, it is likely that performing the movement will flick between conscious and unconscious processes. Practice the movement thousands of times.

2. Think About It More

“Stop thinking about it” is actually bad advice. Trying not to think about a thought tends to make you more aware of it. It is like telling someone who is panicking to try to relax. You are making them more aware that they are not relaxed.

Rather, overthinking the thought will make the thought get tired and fall out of awareness. You can practice next time you have an itch. If you try not thinking about it, the itch will get worse. If you forcefully think about it and how much it itches, it will intensify briefly, but then stop itching. For a movement, we can try to exaggerate what we are doing wrong. If I throw the baseball in the dirt, I will want to think about throwing it harder in the dirt. This contrarian thought will force my unconscious system to take over in most cases. 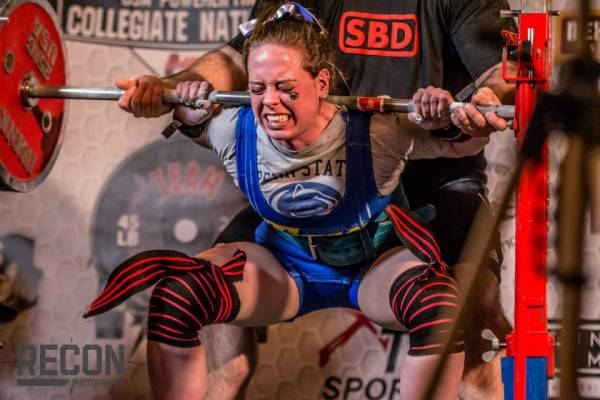 The more you can practice with pressure, the better you will be in the actual situation. If you are doing your first competition soon, practice with people watching and cheering you on. Video yourself if that provokes the same performance issues. College and professional teams practice with loud noises in practice to stimulate game time experience.

In the spinal cord, incoming neurons can overpower other signals. For example, when you get hurt, you tend to rub the area. The rubbing stimulates neurons entering the spinal cord and subsequently inhibits the neurons carrying the pain signals. In the same way, we can inhibit our overthinking by thinking about something else.

For example, although I don’t recommend this technique, a tennis player could hit herself with the racquet to cause pain. The pain would then overtake her conscious awareness. Maybe a safer idea is to use some other stimuli to overwhelm the conscious processes. You could put ice or menthol cream in your shorts to make you uncomfortable. This problem might overwhelm your conscious thought process and remove the focus from the movement.

One type of choking in sports occurs when our conscious system takes over for skills that are ingrained in our memory. Try walking up or down stairs with your eyes closed. You will probably think about the placement of the stairs. Thinking too much will lead to stumbling. Simply allowing your body to move naturally is much better. By relying on implicit processes we go back to the muscle memory we know well.

This overthinking is different than when we panic. With panic, we tend to have too much anxiety, which inhibits our thinking. We lose the ability to plan and problem solve. In the second article, we will discuss this other phenomenon in more detail.