It was noisy weather in Panera Bread when I sat with a grungy college fellow to talk on how he might add some brawns to his barren frame. He was of the gangly sorts, gangly like a daddy-long-legs.

I had coffee. I drink mine mostly black, but occasionally I may dot it with cinnamon. My acquaintance, well, he had an apple turnover or something sweet like that, and with each bite flakes fell from his pastry like casual dandruff onto the table. It looked pretty good, I guess. But I minded my own.

This fellow, he was set to puttin’ on muscle with the kettlebell and would have it no other way, as he fancied working out in the privacy of his dorm room and had already acquired himself a pair of 20s and 24s.

He asked me how to do it. How to put on muscle, that is.

Said he never used kettlebells before. Said he’d been skinny all his life. Said he’d do whatever it takes.

So, seeing what I had to work with, I reached across the table, snatched up one of his unemployed napkins, and scribbled a few notes on it.

When it was done, I slid it back across the table to him. My masterpiece was complete.

I told him he was to do just two exercises, two days a week. I told him that it’d be tough, and that in all likelihood he’d probably fail. So we shook hands and he left. I stayed, however, so that I could finish my coffee. 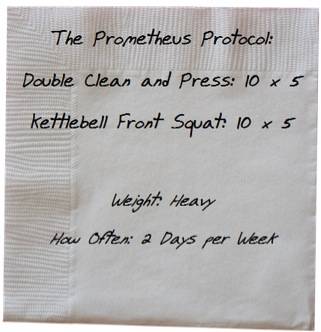 Here, I break no new ground. What you see above is a subtle variation on German Volume Training (GVT), a time-tested and apparently Deutschlander-approved muscle building protocol. The starkest difference, aside from the fact that it’s to be done with a set of kettlebells rather than a barbell, is that I have reduced the overall daily volume by 50%.

That is, I’ve cut the original prescription of ten sets of ten reps down to ten sets of five reps. I’ve done this, mainly, so that you may operate with a higher intensity (weight) and subsequently, build the strength to match the muscle.

I really don’t know how to make it any simpler: One hundred reps per workout. No exceptions. Go as heavy as you can and rest as little as you need between sets. Whether you perform the squats or the double clean and press first is no concern of mine, so long as you get all of your reps in. Also, sleep hard, and dispatch a copious amount of calories. 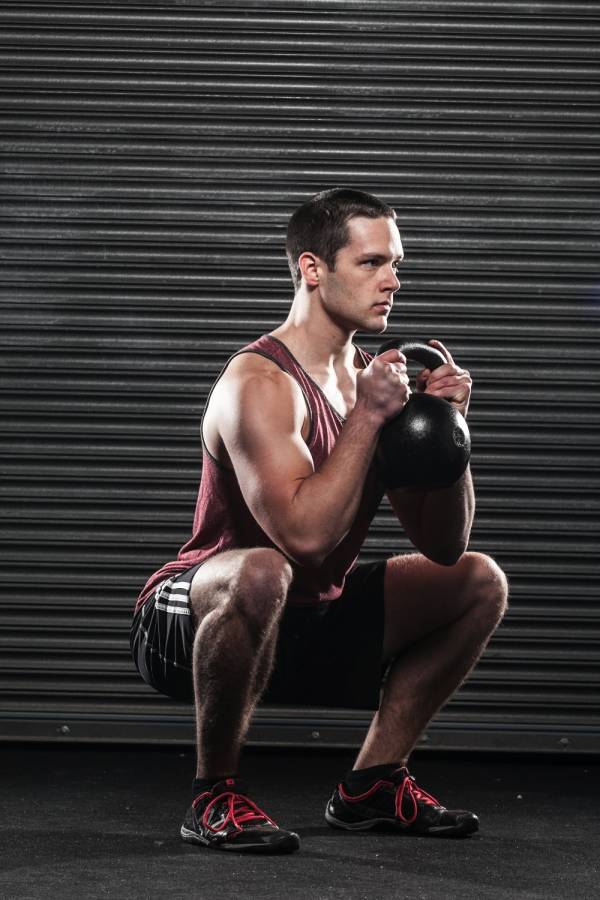 So, you might wonder, how does this all work?

Well, in short, I don’t know. Does anyone know, really? You pick up something heavy and you do it often enough until things start to grow – harder, stronger, and hopefully outward. This much I’ve figured out. But I’m not smart enough to understand all the minutiae just yet. So I’ll quote Dan John (one of the smartest men I know) on how it all works: “I have no idea how anything, really, in the body works. And, it doesn’t matter.”

And to that, I say amen. It doesn’t matter how it works, it only matters that it works.

So then, Pat, if it does work, what are we to expect from all of this? Will I really gain two pounds of muscle per week?

Well, I make no guarantees, as a large part of that will depend on too many factors outside of my control. However, there is strong evidence in your favor. I, for one, put on over 20lbs of muscle in just under three months with this program. The weight gain was mostly clean, too. I ate Chipotle every day, guzzled shakes in between, and went to the bathroom a lot.

And here’s an email I got from Henrik Andresson, a subscriber of mine from Sweden who followed this program a while back, where he talks on the gains he made:

I’m really amazed at how fast I’m gaining (muscle) weight! So far it’s been a little more than 1 kg/2.2 lbs per week!

I have never ever in my whole life been as heavy as I am now, and I love it! If I continue gaining like this I will be around 82 kg/180.4 lbs at the end of the challenge. 😀

(Ladies, please note that this program is just as much for you, as it is for the sirs! You will accrue no undesirable weight, I assure you. Expect lean, dense, tasteful muscle)

And what about strength, will I gain that, too? Now this is certain. 200 heavy reps a week – of two colossal movements, no less – generally makes people pretty strong, or so it seems to go.

My only admonition is this: Come set seven or so, it will feel as if someone has driven railway spikes into your quads, and you’ll feel almost poisoned by the flood of lactic acid. Consequently, you may start to slow down a bit.

Dare I encourage you to push through? Yes, I do dare, but let us not be imprudent about this. Rest as little as you need, but as much as you have to, so that you may (1) keep your faculties about you and (2) complete each set with faultless form.

Now, I’ll say it again, even at the risk of coming off as overly repetitious: This program, I imagine, is about as pleasant as a spell in the stocks – and ought to be applied judiciously. That is, don’t try to follow this year round, as that’d be a wholly unreasonable thing to do. A one to two month stint is more than plenty.

And if somehow you make it through and you still haven’t had your fill, then you know just one thing: you ought to have gone heavier.

Pat Flynn is a fitness minimalist and believes any exercise program will improve in direct ratio to the number of things you can leave out of it that shouldn’t be there.

He is the founder of The Chronicles of Strength and chief contributor to the Chronicles Of Strength Inner Circle - a monthly newsletter dedicated to helping you reach your goals through fitness minimalism (or doing the least amount of exercise needed to get the job done).