As yoga’s popularity has increased, I see more and more athletic programs using yoga-inspired movements. I think this is wonderful, and have absolutely no problem when people call these movements by Westernized names other than their ancient titles. I’m pretty sure the trademark symbol does not exist in Sanskrit.

But every so often, it’s nice to see yoga acknowledged for its athletic benefits. A new study that was released in the International Journal of Yoga provides more evidence that when it comes to flexibility, yoga is the name of the game, even when that game is soccer.

Before the testing period, the researchers assessed flexibility in all the athletes. Then, after ten weeks, they did the same assessments. These tests consisted of three categories:

Three of the assessments performed by the athletes. (Photo courtesy International Journal of Yoga)

At the end of the study, the yoga group subjects showed significant improvements in ankle dorsiflexion, knee flexion, hip flexion, and shoulder extension. The subjects in the yoga group also demonstrated more balanced positioning in the chair position. 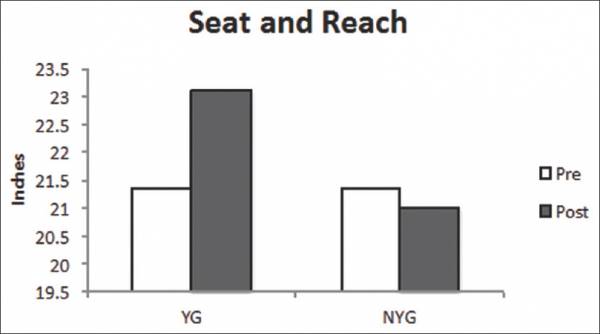 The researchers suggested that the loss of flexibility and balance in the non-yoga group was due to the specialized training the athletes underwent during the testing period. For this reason, they made the following conclusion:

To maximize the training opportunities, activities that more effectively improve athletic performance are critical. Because sport is a multi-dimensional endeavor, athletes may consider taking part in activities that optimize the specific dimensions of fitness as well as the aspects of the multiple dimension of performance.

I am curious as to how this experiment would have turned out if the athletes had participated in the same sport, since baseball and soccer require different skill sets. But overall, this study suggests regular yoga practice has an impressive ability to impact balance and flexibility in high-level athletes. I’m sure it wouldn’t hurt for everyday athletes and weekend warriors, either.