Improving business and management skills appeals to almost everyone. Go to any airport and you will see scores of books about this. If you’re not already the boss, chances are you’re either dreaming of being so, or running your own business.

In fact, you are already the boss of your own business. And your body is your business. The enjoyable and relatable topic of business can help you learn a lot about how to “run” your body. Here are five business strategies you can employ to put yourself in charge of a sustainable and successful venture, without going bust in the process.

A boss puts in the work to ensure that his business is running on all cylinders.

Movement is like money. Sure, you can take out a loan against the business for a big purchase (for example, take your body beyond its capabilities during competition), but you’re going to have to pay off that bill at some point. In other words, at some point you’ll need to deal with the dysfunction.

I first heard this analogy from Dr. Mark Cheng in a Prehab-Rehab 101 video. I’m going to push it a little further here, and I hope it does Dr. Cheng justice. If you continue to borrow movement without paying it back, you’re getting yourself more and more into movement debt. Ignore that debt completely, and you’re going to have some nasty characters knocking on your door. In this case, those unwelcome visitors are called injury and pain.

To make sure you don’t get yourself in this position, your business need to be wealthy in movement and movement capacity. Then you can write the big checks. Your bank account needs to be able to easily swallow up the cost of the purchases you are making, including big purchases (competition), standing orders (regular sessions), and ad hoc spontaneous purchases (fun things and new sports you choose to do). This means that day to day, your training must build up more movement riches than you require for purchases. Otherwise you’re borrowing all the time, and that’s no way to run a business.

2. Invest in Your Team

In business, your people are your most prized assets. In the case of your body, your team is your body, and your team members are your body parts. Your role here as boss is straightforward. Look after them and get them working in sync with each other. Ideally, you’ll look after your team on a regular basis, rather than ignoring the issues until things get a little bit hairy. No, not literally. Actually, why not literally? That analogy works too.

“Make decisions for your body like you would for your business and you’ll be well on the way to owning a business that works well for you, rather than one that hates you, works against you when you’re not paying attention, and doesn’t work well as a unit.”

You’ve built up some reserves in your movement bank account, now it’s time to reinvest it in your team. Treat them well, make sure their workload is manageable, give them time to rest, and the business will run smoothly. If you don’t, and especially if you are working your staff hard, you’d better look after them. Pay for their health care (invest in physio, chiro, and other medical needs), provide them with relaxing breaks (have massages and treatments), and take them out for some nice meals (eat well-sourced, good food). And guess what? These things will more than likely get your hard working team members functioning better as a team too – that means your whole body as a unit.

3. Allow for Days Off and Holidays

A heavy workload here and there is okay, but in general, daily workload should leave you wanting to come into work the next day. In our analogy, you should want to train again, rather than dread the thought because the work is too much.

Using the same analogy, if one member of staff isn’t a team player for a particular project (isn’t performing his proper role in a particular movement), you need to work out why. Otherwise, another team member is going to have to take up the slack, and sooner or later this overloaded team player is going to get annoyed, become a problem for you, and cause you pain. Then you’re going to look at the guy who is doing all the work and causing you pain and think he is the problem. You’ll go about trying to fix things with this person. Being the nice boss that you are, you’ll probably try to ease his workload – perform SMR to ease the tightness from the additional work. 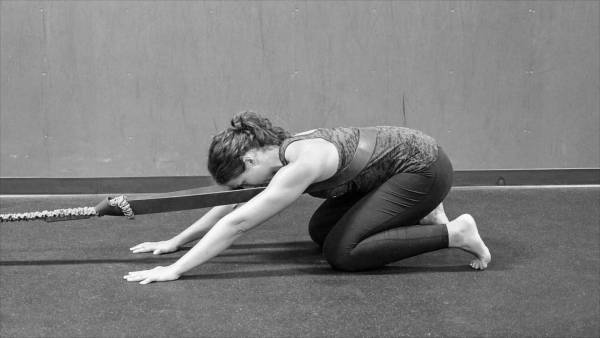 A boss learns ways to prevent money leakages, like using the resisted quadruped rock to activate the core before squatting.

But it’s not this team member who is the problem. He is actually doing you a favor and picking up the slack from the real troublemaker. So easing the workload of the busy guy may seem like a good thing, but you’re probably storming in and making things worse with good intentions, like most bosses do. Telling him to go home early will only make things worse for the business as a whole.

Do some investigation. Trace back from the team player to find out who the real troublemaker is. Then you can take some pressure of your poor overworked guys, but also fix the problem at the root. My friend, mentor, and fellow Breaking Muscle writer Dr. Perry Nickelston often quotes Ida Rolf – “Where you think it is, it ain’t.”

When you’ve worked out who the troublemaker is, it’s no good just shouting at him in an effort to get him to improve by performing endless mobility protocols. You need a more integrative strategy. And again, we can turn to Perry for this, as Perry is boss – see what I did there? He has a fantastic system to reintegrate the troublemaker called the RAIL system. Now again, hopefully I’ll do Perry justice, but this is how I see it:

Did it work? Excellent, but you might need to revisit the process again sometime soon. If it didn’t work, you might have been looking in the wrong place. Take a step back and figure out who the real troublemakers are. There may be more than one.

Your Body Is Your Business

Your body is your business.

Make decisions for your body like you would for your business and you’ll be well on the way to owning a business that works well for you, rather than one that hates you, works against you when you’re not paying attention, and doesn’t work well as a unit.

And your body is your business.

You’re in charge, and you have more of a vested interest to make this work than anyone else. Don’t let your team run circles around you. Be the boss.