2 Causes of Hip Pain and How to Treat Them: Sciatica and Piriformis Syndrome

Sciatica and piriformis syndrome are two conditions often presenting with similar symptoms. Here is a guide to the difference between the two as well as treatment for each.

The hip is a major contributor to all core work. In fact, when we first learn to sit up as babies, we rely on our hip muscles rather than the muscles of our trunk to do this. Repetitive motion like cycling, running and squatting can irritate the muscles in and around the pelvis, leading to chronic pain or limitation. Sciatica and piriformis syndrome are two conditions often presenting with similar symptoms. Here is a guide to the difference between the two as well as treatment for each.

Description: Often, when a person complains of hip and back pain, the go-to diagnosis is sciatica. Sciatica is actually a very specific source of pain. The sciatic nerve’s origin point is just at the top of the gluteal muscle in the L4 and L5 vertebrae. When inflammation occurs in this area, it can compress the sciatic nerve and send a radiating pain down the back of the leg, typically ending at the knee but potentially carrying all the way to the calf.

Contraindications and Treatment: Sciatica is made worse by forward bending or deep flexion of the hip joint. In fact, you may know you have sciatica because the pain shoots down the leg when you bend over. For this reason, in yoga, sciatica is often treated with gentle back bending and mild external rotation of the hip. For example, bridge pose is often prescribed. Cobbler’s pose, often called butterfly (pictured right), is also beneficial for sciatica treatment. If you suffer from bad sciatic pain, you may even consider sleeping with the affected leg in the butterfly position. 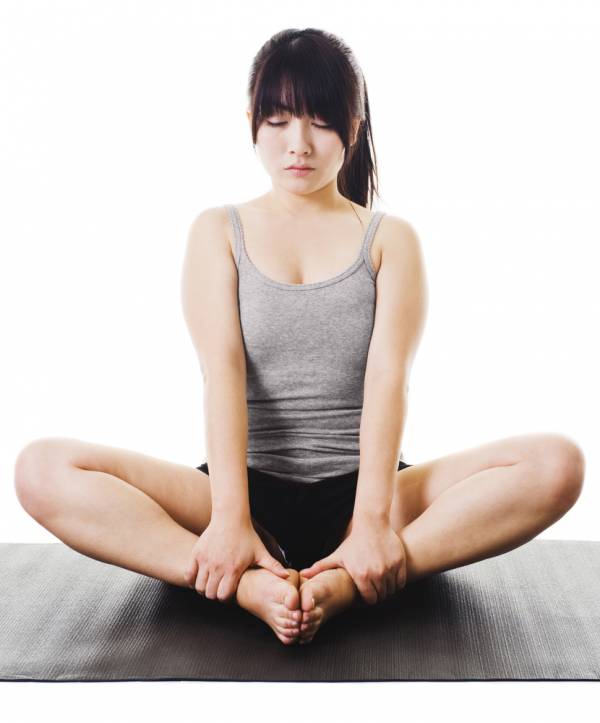 If sciatica is caused by a bulging disc in the lumbar spine, it will be critical to work with a doctor to know when motion can be reintroduced to this area of the body. Forward folding is contraindicated for any lumber bulge. Working to properly engage the muscles of the core will be essential in healing this injury. Even those with “strong abs” may need to reevaluate the use of the transverse abdominis, the deepest layer of the core, to reinforce the strength of the back. Strengthening the low back, opening the hamstrings and reducing tightness in the outer hips will also help restore the spine’s natural curvature and function.

Description: The piriformis is a deep stabilizer muscle within the iliac (pelvic) crest. (Bright red in the image to the right.) It originates at the very base of the spine and inserts at the top of the femur bone. It is often confused with the psoas, but the piriformis is smaller, deeper, and more specialized. When you feel the muscle at the front of your hip, you are likely touching the psoas as the piriformis is more on the posterior portion of the hip. Piriformis syndrome is the result of an inflammation in this muscle that presses on the sciatic nerve. The pain is often more localized in the hip and buttock where general sciatic pain tends to radiate more down the leg.

Common Causes: Repetitive motion is the most common cause of inflammation in the piriformis. Distance runners and soccer players are often more subject to this issue. Interestingly, nearly twenty percent of all people have a condition where the sciatic nerve goes through the piriformis; these people will be predisposed to sciatica caused by piriformis syndrome.

Contraindications and Treatment: When sciatica is caused by inflammation of the piriformis, treatment of this specific inflammation is the best course of action. All inflammation can be helped with a course of rest, ice, compression, elevation (RICE) as prescribed by a doctor. Anti-inflammatory medication may also help. Stretching the piriformis and getting blood flow to this area through yoga can ultimately decrease symptoms, but this should only be taken on once the pain has subsided to manageable levels. Classical sun salutations (not series A salutations) and moon salutations open the hips quite well and may be performed daily. 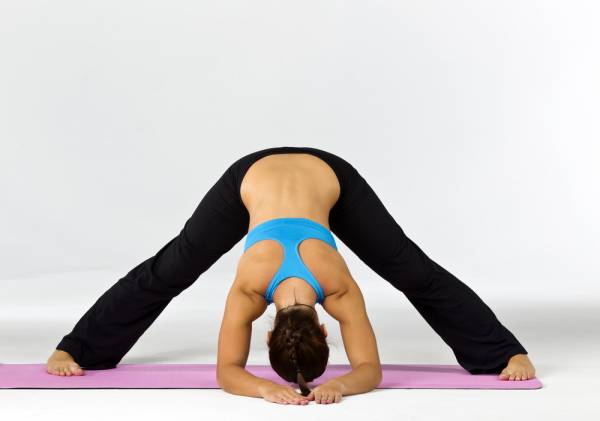 As the piriformis is in charge of laterally rotating and abducting the hip, all poses or lifts that require this action should be approached mindfully. In yoga, these poses include the Warrior II family, such as Warrior II, extended side angle, triangle, and balancing half moon. A better approach would be to laterally rotate and abduct the hip while in a supported supine position. Pigeon with the support of bolsters, gomukasana while seated on a block, or wide leg forward bend with the torso resting in support can all help increase blood flow and ultimately allow the body to heal.

Ultimately, sciatica and piriformis syndrome are both disorders caused by inflammation. The best treatment for any inflammation is – sorry, athletes – rest. After rest has helped manage the sensations, light yoga with a therapeutic focus can be used to reintroduce movement to the muscle groups that were inflamed. Once you’ve had sciatica, it is very likely you will experience it again in the future; certain people are simply predisposed to this condition because of their anatomy. Learning to listen to your body and know the signs of inflammation before intense pain sets in will help stop the cycle of injury in your body.