2 Safer Alternatives to the Overhead Swing

It is tempting to call for the removal of overhead swings all together. With two better alternatives, they seem unnecessary.

Andrew Read once wrote a great article on why the American/overhead swing is wrong. This debate continues with little change in the overhead swing’s status as a staple in CrossFit workouts.

This article attempts to present the reasons why this swing is not optimal and provide two alternatives.

RELATED: Rationalizing the Swing: Why the American Swing Is Wrong

Four Reasons the Overhead Swing Is Not Optimal

1. The focus of the swing is an explosive hip motion. When we swing, we are working toward building explosiveness in the hips. Research shows that hardstyle swings are an effective tool for increasing vertical jumping ability. Our hips can be explosive without any standard on how high our hands go. If you have too much explosiveness leading to your hands going overhead, swing something heavier.

2. The overhead swing can lead to overemphasis on the arms doing the work. Many people start with a light kettlebell and treat the movement as a shoulder workout. The ballistic hip movement should be the focus.

“[I]t remains that people lacking mobility do try to go overhead and, as a result, they compensate with unhealthy position.”

3. The overhead swing puts the shoulder in a less safe position at the top of the motion. When a person attempts a heavy deadlift or heavy swing, he or she should pull the shoulder blades back and down (packing the shoulders). This protects the shoulder and tightens the back. When we catch a heavy load overhead (e.g., a jerk or snatch) we also want our shoulders in that same position. If we are shrug up or round our back, we put our shoulders at greater risk.

Try this movement as an example:

There might not be an epidemic of rotator cuff injuries coming from overhead swings, but it might add unnecessary wear and tear.

4. Many people do not have the necessary thoracic mobility for the kettlebell going overhead. This last reason may not even belong on the list. If we ruled out movements that had mobility requirements, then we would rule out most other movements. But it remains that people lacking mobility do try to go overhead and, as a result, they compensate with unhealthy position.

Because of the above reasons, there are two great alternatives that could take the place of overhead swings:

Heavier hardstyle swings build a great deal of explosive power. First, the eccentric movement is similar to jumping. Adding more weight leads to more power. The change between a concentric movement to an eccentric takes a great deal of power to reverse momentum. The more weight you have to reverse in the motion the more explosive one will be. Coaches, prepare yourself for smiling faces as people see how explosive they can be with heavy swings.

“A heavier kettlebell also teaches people to not use their arms. The goal of a kettlebell swing should be exploding with each swing without worrying how high the kettlebell goes.”

How much should you use for heavy swings? One extreme is what Max Shank advocates at 400lb swings. He has the right idea, but that weight is probably at the extreme end of possibility. For strong ladies, I have them swing a 32kg (70lb) kettlebell. For strong gentlemen a 48kg (106lb) kettlebell is nice. But you must learn proper mechanics at much lower weights first.

A heavier kettlebell also teaches people to not use their arms. The goal of a kettlebell swing should be exploding with each swing without worrying how high the kettlebell goes. If the kettlebell is heavy, the swinger won’t be tempted to use his or her arms and will be forced to use the hips.

If you want to put the kettlebell overhead, then a snatch is a much safer movement. It allows the shoulder to be in a better position at the top of the motion. Using only one hand allows a person to do more continuous snatches without losing grip strength.

One reason people avoid kettlebell snatches is that they feel the catch at the top is dangerous. Often, the first time a person tries a snatch, the kettlebell flops onto the forearm and then he or she quits (maybe rightly so). There are some simple steps to teaching the kettlebell snatch to avoid pain.

Steps to Build to a Kettlebell Snatch

“[A] snatch is a much safer movement. It allows the shoulder to be in a better position at the top of the motion.”

The Role of CrossFit

We often blame CrossFit for the overhead swing variation. But Pavel mentioned it in the Russian Kettlebell Challenge (page 62) written in 2001. That said, he has not mentioned it again in his writing and he does not teach the overhead style. 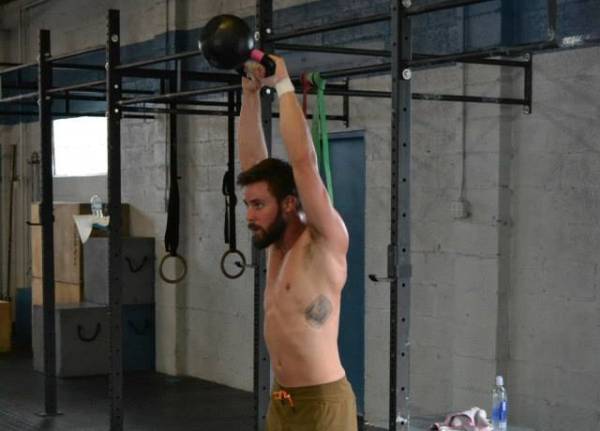 A picture on CrossFit’s description of an overhead swing made me cringe to see the female athlete squatting in the bottom position of the swing. If the pictures from CrossFit headquarters are showing the movement incorrectly, how can one expect most athletes to do it correctly?

RELATED: A Systematic Approach to Improving Your Kettlebell Swing

It is tempting to call for the removal of overhead swings all together. The movement might be suitable for some athletes, but with two better alternatives, they seem unnecessary. Heavy swings will build more explosive power. Snatches (with lighter weights) can build more endurance. The snatch also puts the shoulder into better position at the top, relative to the overhead swing.

Note: With all apologies to Valery Federenko and people using Girevik Sport style. The swing and snatch described here is a bit different. This is the hardstyle swing and snatch taught by StrongFirst and the RKC.