Rationalizing the Swing: Why the American Swing Is Wrong

Technology has ruined the world. Deep down we all know that, right? From hordes of zombies walking down the street staring at their phones, not paying attention to their surroundings, to mass commercial agriculture, we’re going backwards. People are more removed from their surroundings than ever before and we see it on a daily basis when they come into the gym.

Back when I first started training people I remember that everyone could do push ups and sit ups, yet these days it’s all too common that people walk in the door and can’t even do a single push up. I imagine what would happen if these people fell over – stuck on the ground like turtles on their backs unable to get back up again unless someone helps them out. But I digress.

One of my clients is smart. I mean so smart that often I can’t speak with him for long because he sends my brain into a twist. Often after we speak, I find myself on Wikipedia looking up something he said or looking for the definition of a word. That’s a good thing, as I think the best relationships are those where both parties benefit. In this case, I am helping him discover his physical self and he’s helping me figure out more about what’s going on around us. I only hope that one day my progress is as pronounced as his has been.

What he said to me over the last two days, both in person and by email, has been quite eye opening. He taught me about rationalization. He defined this as an attempt to improve or modernize things, and this is actually the point of this article. This mode of thinking has seen people attempt to fix and modify kettlebell training, despite the fact that kettlebells have been used for physical culture for over three hundred years. Isn’t it possible that people have figured out the best uses for these tools over the last centuries and any attempts to fix something that isn’t broken is only in an effort to seem like you’ve got something original to say?

The biggest culprit of this is the American swing. 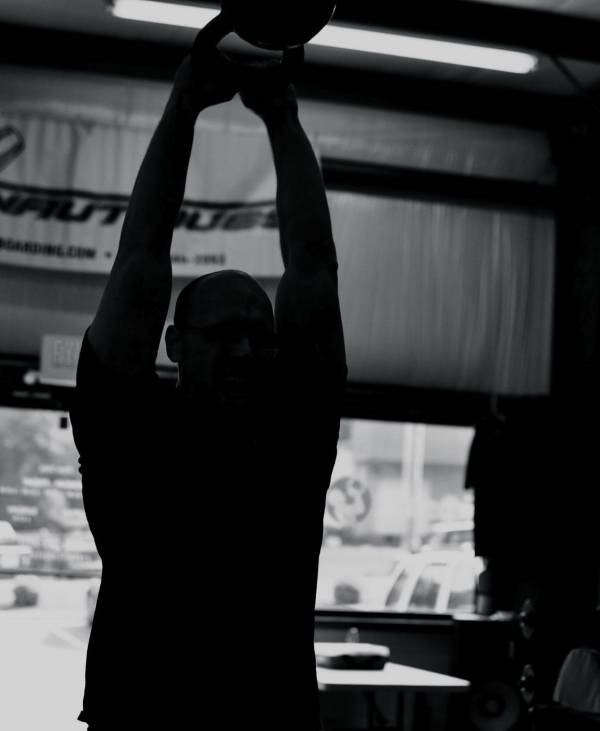 For people who don’t know let’s look at the main point that distinguishes the American swing from a swing done correctly – it’s a two-hand swing where the bell travels overhead.

But you need to ask yourself if the kettlebell is really designed for that? Let’s look at some of the problems that are within the overhead swing. For starters, kettlebells are not designed to be used with two hands. No matter whether you own classic bells or competition style this is true. Kettlebells are designed to be used one handed. Of course you can use them with two hands for exercises like the goblet squat or the two-hand swing, and even for corrective work such as seen in the FMS system. But none of these exercises feature having both hands so close together and then raised overhead.

The reason for that is simple – the closer your hands are together the less shoulder mobility you’ll have. This is compounded by a wide enough stance to swing the bell between the legs, as the opposite is true for the lower body – the closer your feet are together the better your shoulder mobility. So a wide stance and a narrow hand position are going to just about make the chances of having adequate mobility in our overhead swing impossible.

This leads to the next problem – that awful head stuck out, lower back hyperextended position that many are forced to do to get into the finish position. Having to do awful things to your posture to perform a movement should be a clue that something is wrong. The hyperextended back is a sign of the swing being finished with the quads and not the hips as it should be, while also creating movement that allows the neck to be pushed forward so the ears are past the arms. 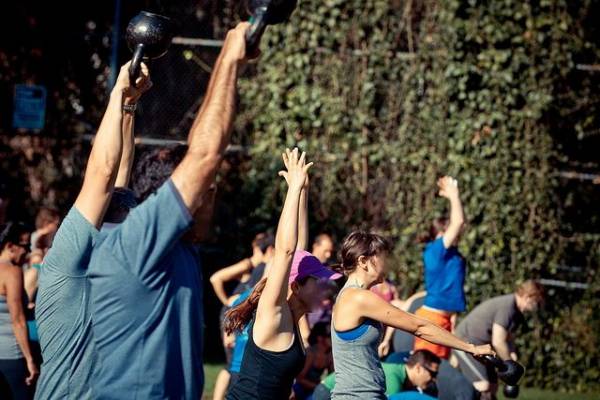 At about this point someone will tell me, through a flawed understanding of physics, that moving the bell overhead somehow equals more “work.” While it’s true that the equation for work in physics has a component of the distance the mass travels, someone making that argument is not really seeing what is going on. If we all recognize that the swing is a hip hinge and is all about hip extension, then at the point the hips are fully extended you’ve actually finished working. The rest of the movement is the bell continuing on its upward path thanks to the momentum caused by the hip extension phase. In a well-performed swing the hips come to full extension about the same time the upper arms come away from the rib cage. Considering that at this point the bell will still be below waist height you should start to realize that as far as the swing is concerned you’re actually finished. The rest is just waiting until the bell begins its downward journey so you can hike it back and hinge again.

Even if the bell does go overhead you still haven’t actually done more work – if you swing correctly. If you tell me that at this point you need your arms to help the bell get overhead you’re doing something else. The swing is a hinge and extension pattern and the arms are merely hooks. If you need your arms, then you’re doing something other than a swing. It’s like shrugging at the top of a deadlift to get the bar higher. Is the goal to get the bar higher, or to hinge and extend? 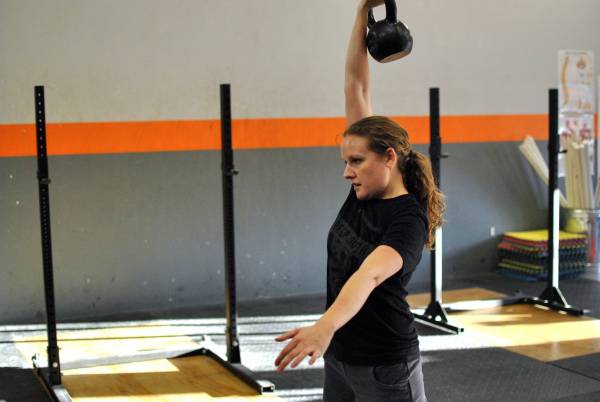 Which leads me to what you should be doing to get the bell overhead. Kettlebells are designed to be used single handed and going overhead with one hand will be far more accommodating to your lack of mobility than two hands will be. The lift you’re looking for is the snatch. The snatch does allow you to do more work because as the bell gets to around chest height you’ll need to high pull it (in most cases) to get the bell through the second stage of the movement, before punching the hand through and finishing with it overhead. (I say in most cases as done perfectly the bell will still be able to be floated into the correct position overhead with minimal effort on the high pull. But many will try to use a bell too heavy to allow them to get this right and will still have too straight an arm during the first half of the snatch).

So, in an effort to modernize a three hundred year old tool in regards to the most foundational exercise of all the kettlebell exercises, we’ve actually made things worse. Overhead swings are likely doing damage to your AC joint and forcing you to overextend your back while not actually training the hinge movement better. If you choose to go overhead then opt to go one handed, as the design was intended, and snatch instead. Your shoulders will thank you and your hip hinge will still be trained fully. As a bonus you will give your grip a solid workout and test your shoulder stabilizers better as you learn to fixate the weight overhead in an instant.

If you do choose to swing with two hands, then swing to chest height where your lack of shoulder mobility isn’t an issue and you can maintain good form. Remember that once your arms come away from your body the swing is essentially finished anyway, so you’re actually doing the same amount of work while saving the body from future injury.