3 Fundamental Core Exercises You Need in Your BJJ Strength Program

Grapplers require a strong core to help prevent motion and to transfer power from the hips.

Athletes, your coaches probably tell you that you need a strong core. This is sound advice – except for the fact that most people’s understanding of the function and proper training of the core is limited.

In grappling sports, such as wrestling, Brazilian jiu jitsu, and judo, a strong core is needed to improve performance and prevent injuries. But don’t just start doing crunches to make your core stronger. You must gain an understanding of your core – the muscles involved, the function, and the proper training progressions.

I’m going to share all of that with you, as well as the best three core exercises you should be doing.

RELATED: Forget Crunches: How to Actually Strengthen Your Core

The Core: What It Is and What It Does

The term core must be defined before you can understand how to properly train it. According to Dr. Stuart McGill, the core is made up of the lumbar spine, the muscles of the abdominal wall, the back extensors, and quadratus lumborum. In addition, the lattisimus dorsi and psoas pass through the core and provide a link between the pelvis, legs, shoulders, and arms.

For the core to function optimally, the gluteal muscles need to be the primary power generators and must work synergistically with the pelvis. The core is not just a group of muscles. It is a group of muscles that work together as a unit. A weakness in any of the core muscles will affect its ability to function properly.

RELATED: The Biomechanics of Changing Direction

Another important function of the core is its ability to function as a transfer mechanism. When power is generated in the hips, it is transmitted through the stiffness of the core. Every technique in Brazilian jiu jitsu requires the movement of the hips and the stability of the core. 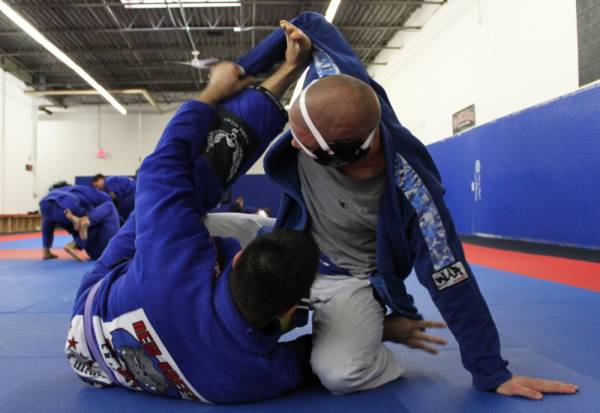 The Core and Grappling

“The end result is evidence that a strong core makes the rest of the body stronger. Improving the strength of the core will improve the overall strength of the grappler.”

A strong core is also needed for injury prevention. The physical demands of grappling increase the risk for injury. One study followed pre-season collegiate gymnasts and had them perform core exercises for ten weeks. Their results showed the exercises prevented any new back pain incidents and controlled pain in those with a history of pain.

RELATED: Stability for BJJ: Why You Need It and How to Get It

As with any exercise program, proper progressions and programing are essential. If there is pain associated with a specific movement, then the first step is to eliminate that exercise. For example if a grappler feels pain in their back every time they shoot a double leg, the first step for this grappler is to temporarily eliminate double legs from their training.

After that, you add in corrective exercises that focus on developing a stiff core. Dr. McGill recommends starting with what he calls the “big three”:

All of the big three exercises require an isometric contraction at the end range of the movement. Hold that isometric for no longer than ten seconds.

Grapplers need to be able to maintain the strength of the core while in motion. In order to do this, the body must maintain stability in certain areas of the body and provide motion in others. An easy way to picture this is that during a squat the lumbar spine and core need to remain stable, while the hips must move. Good exercises to include in a core-training program are weighted carries such as farmer’s walks where the core must be stiff while the lower body moves.

“Grapplers need to be able to maintain the strength of the core while in motion. In order to do this, the body must maintain stability in certain areas of the body and provide motion in others”

Another way to categorize motor-control movements is by foot position. According to Gray Cook, you can group exercises based on foot position. An example of a group of exercises organized around foot position could be squatting, stepping and lunging. Each foot position places a different stress on the core. And in any of the grappling sports, the participants are going to find themselves in all three of those foot positions.

Core training is more than doing crunches. To properly train the core, you need to understand its function first. Grapplers require a strong core to help prevent motion and to transfer power from the hips. Having a strong core allows grapplers to perform tasks they do not have the strength to perform. A proper core-training program may be the missing element to many grappler’s strength and conditioning programs.