You’re about to identify which muscles are working against you, and how to get them fired up for a bigger squat.

The squat requires a complex coordination of a range of joints, muscles, and ligaments. When all are working in synergy, activating effectively, and performing as they should, you get an explosive squat with solid technique.

If one part of the body fails, isn’t activated, or doesn’t get used properly you will get slow, ugly, and potentially dangerous squats, limiting the weight you can put on the bar.

RELATED: How to Squat More Without Getting Stronger

There are three particular muscle groups that contribute to poor technique, weak positioning, and lack of strength or power in the squat. You’re about to identify which muscles are working against you, and how to get them fired up for a better squat result.

Me fired up and squatting big at a strongman competition

The gluteus maximus is a primary mover in your squat. It supports your eccentric phase as you lower into the hole, and is then responsible for hip extension during the concentric phase.

“Ever performed a squat that looks more like a good morning? If so, the glutes are a good bet as to the reason why.”

As you squat down, if your glutes are weak or not firing, they will push your torso forwards. As you lower towards full depth, this torso angle along with the lack of glute stabilisation will force anterior pelvic tilt (this is bad, by the way).

As you begin to squat back upwards, you will place load on the lower back instead of driving hip extension through your glutes. Ever performed a squat that looks more like a good morning? If so, the glutes are a good bet as to the reason why. 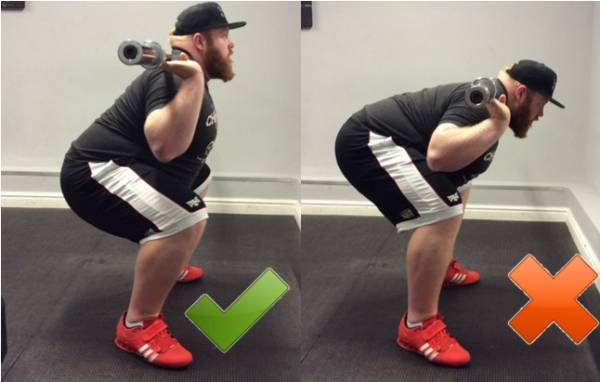 This instability and lack of activation reduces your power output through your legs, as you’ve turned a leg-dominant movement into a lower back movement. Strength and max numbers aside, this scenario also creates a dangerous motor pattern that can lead to a variety of nasty and niggling injuries in knees or hips, and even disc problems.

RELATED: 4 Simple Exercises to Get Your Glutes Fired Up

How Do I Test if My Glutes Are Weak?

The easiest way to test glute strength and engagement is to bend at the hips over a table or physio bench. With one leg on the floor, using your glutes, lift your heel up into the air and get a training partner to gently resist your extension.

If your glutes fatigue quickly under resistance or you struggle to even pull your leg back, you need to get your glutes activating more effectively and strengthen them up.

The hip flexors (illiacus, psoas, and rectus femoris) act as a hinge throughout the squat movement – they pull you from an open hip to bent at the hip.

Tight hip flexors (also synonymous with poor glute activation) will shorten in length. This causes a skeletal change to your pelvis, which is as serious a problem as it sounds. This once again creates anterior pelvic tilt, which lengthens your abdominals, hamstrings, and gluteals. This anterior pelvic tilt also shortens your quads and lumbar spine and can create exaggerated lumbar curve (lordosis).

“Most people who suffer with hip flexor issues will notice more predominant DOMS in their quads and probably consider themselves to be quad-dominant through the movement.”

If you know about squatting, you’ll see that list of muscles and realise how important the hip flexors just became to you and your squat. The unwanted effects of anterior pelvic tilt are wide and varied – and none are good for you.

Shortened or tight hip flexors contribute to your squat in a similar way as weak or non-activating glutes – they create a forward tilt at the base of the squat as you don’t have full range of movement through your hips. This contributes further to your high hips and good morning type squat movement.

Most people who suffer with hip flexor issues will notice more predominant DOMS in their quads and probably consider themselves to be quad-dominant through the movement. You should feel most soreness through your posterior muscles – the glutes and hamstring. So if your hips are rising and you’re driving with your back, think about your hip flexors and their tightness.

How Do I Test if My Hip Flexors Are a Problem?

The most commonly used test is the Thomas Test:

Your hip of your resting leg should relax down and lie flat.

If the hip of your resting leg is sitting high and your leg has a little bend at the knee, then this would indicate a tight hip flexor.

The adductor magnus supports stability throughout both eccentric and concentric phases of the squat. It has two insertions, one helping with flexion of the hip and the other with extension from the posterior (part of the hamstring group). It bridges the gap between your quads and hamstrings and acts almost as the stirrup that supports their movement.

“If you’ve suddenly started squatting deeper, but find your knees buckling, then your adductors are likely to blame.”

The easiest way to understand the adductor is through its role in the stabilisation of the knee and leg as you move through the squat. If the adductor magnus isn’t activated or firing effectively, it creates instability as you lower yourself down, shearing forces to the knee and hips, and the medial knee collapse all big squatters fear.

A non-firing aductor magnus can also rear its ugly head during the concentric phase. Everything feels good, you hit depth, and then as you begin to head back up your knees buckle inwards. A contributing factor to weak adductors can be not going low enough in your squat. If you’ve suddenly started squatting deeper, but find your knees buckling, then your adductors are likely to blame.

If you ever leave a squat session with what feels like a groin strain that only last a couple of hours – welcome to the world of a tight adductor.

RELATED: Do We All Squat the Same? 3 Movement Principles For Every Body

How Do I Test if My Adductor Magnus Is Weak?

If one side (or both) feel like they aren’t providing relative pressure, your adductor magnus on that side is not firing effectively. 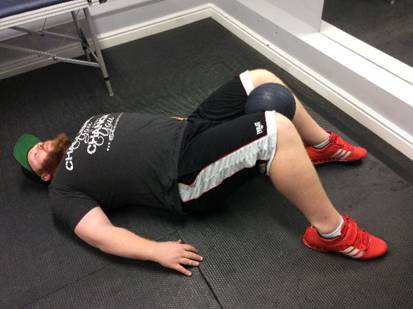 Place a ball between your knees and squeeze them together

How to Fire Up Your Muscles for a Bigger Squat

Now you’ve discovered the offending muscle groups, it’s time to prepare them for action. Try this simple warm up to ensure your muscles are activated, engaged, and ready to go to work to give you that bigger squat.

Before you start, do a bodyweight squat and make note of how your glutes, hip flexors, and adductors feel. We’ll do another squat at the end as comparison.

Lie on your back, feet shoulder width, flat on the floor. Your legs should be at 45 degrees. Breathe into your core and engage it. Then, contract your glutes, engage them, and squeeze as hard as you can to push your glutes upwards and form a straight line from your shoulders to your knees. Hold for a couple of seconds and then release back down.

Kneel with one knee on the floor and place the other foot in front of you. Lean backwards and feel a stretch through your hips. Hold for 10 seconds. If you want to have a larger stretch, place your arms in the air and lean back further. Keep to small progressions with how much pressure you apply.

Change to the other side and repeat 3-4 times. 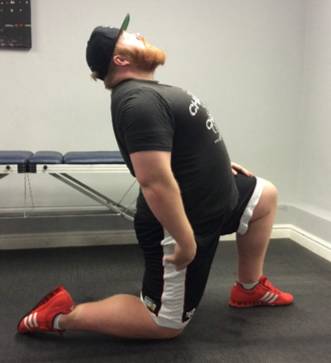 Lean backwards and feel a stretch through your hips

Invest in some TheraBand from eBay (99p for a roll). Tie a band of it around your knees and have it tight enough so standing shoulder width apart is a challenge. Stand with your feet just past shoulder width and engage the inside of your legs and groin. Then, take short controlled steps to the side (like a crab).

10 steps should be enough to get everything engaged. 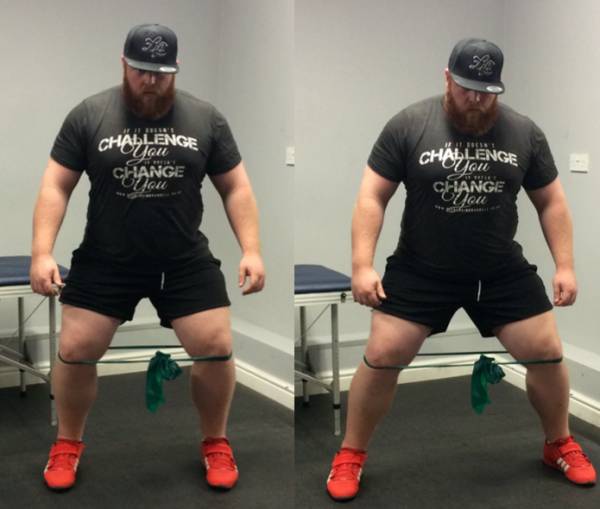 Take short controlled steps to the side (like a crab)

Do these three exercises and perform a bodyweight squat again. You’ll notice a significant difference.