Do We All Squat the Same? 3 Movement Principles For Every Body

For all the thousands of different people I have worked with, one thing has remained the same. You can’t change movement principles. Here are three things that means in terms of the squat.

Let’s get one thing straight. We as humans haven’t changed much in the last few hundred thousand years. (Yes, we have been around that long. It’s scientific fact.) You are only perhaps a little bit taller, a little less hairy, and a little bit fatter. (Sorry I called you fat.) If you don’t believe me read The Story of the Human Body by Daniel Lieberman.

Let’s get one thing straight. We as humans haven’t changed much in the last few hundred thousand years. (Yes, we have been around that long. It’s scientific fact.) You are only perhaps a little bit taller, a little less hairy, and a little bit fatter. (Sorry I called you fat.) If you don’t believe me read The Story of the Human Body by Daniel Lieberman. He’s an evolutionary biologist at Harvard and is much smarter than I will ever be.

The lack of change in the human body over the past few hundred thousand years tells me we must be getting pretty fine-tuned. Just think about some of the feats we have accomplished:

Even though most of us will never get close to any of the feats these people have accomplished, no worries. The reality is that we all still have to follow the same basic movement principles.

The Movement Principles of the Squat 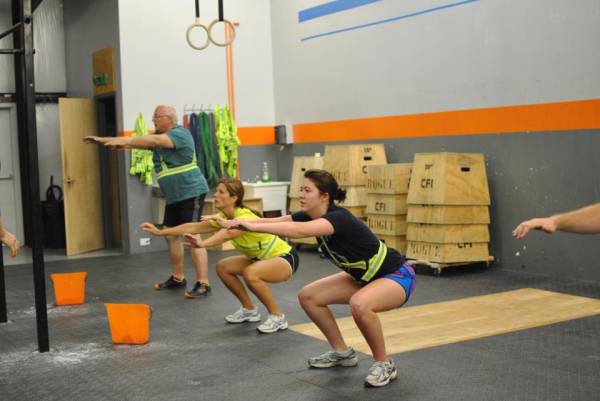 Let’s take the squat for example. As a physical therapist in the Army and a CrossFit coach, I see people of all different shapes and sizes.

For all the thousands of different people I have worked with, one thing has remained the same. You can’t change movement principles.

In terms of the squat that means these three things:

1. You Have to Prioritize Your Spine First

The proper position of the spine has enormous potential on both power production and expressing full mobility capacity.

Don’t screw around with your central nervous system. If you do your own body will reject you.

2. You Have to Create Torque to Stabilize Your Spine

A commonly used cue for this is, “Screw your hips into the ground.” You have to create maximal external rotation torque at the hip to stabilize the spine.

Don’t believe me? Sit on the ground with your legs straight out and see how long you can keep a good spinal position. Now do the same thing but sitting with your legs crossed (half lotus position, if you can do it).

The reason the crossed-leg sitting helps allow you to sit longer is that it creates a stable position for the lower back through external rotation of the hip. I feel this concept starts at the foot position.

If your feet are turned outward more than fifteen degrees it’s hard to create significant amounts of torque at the external rotors of the hip.

The reason why is because you have effectively shortened the external rotators. This takes them out of their optimal position and doesn’t allow you to create as much muscular force. The diagram below will help illustrate my point better.

As you can see, there is a sharp drop in potential force production the further your feet turn out.

3. Move the Joint You Want to Load Maximally First

Of course, no one would pick the knee to be loaded maximally over the hip.

That would be like picking Glass Joe over Little Mac in a fight. (Yes, I did just reference NES Punchout.) Fight to keep the shin vertical for as long as possible.

You Might Be a Special Snowflake, But Your Squat Isn’t

Some critics of these principles would say that you are safe to squat with your feet turned out to thirty degrees or more. I have heard this from coaches with backgrounds in kettlebell training, CrossFit coaches, and collegiate strength coaches.

We know that if you throw with efficient mechanics you throw harder and get hurt less often. The same thing applies to the squat and it should vary little from one person to the next.

These same individuals refer to the anteversion or retroversion of the hip as being rational for gross differences in people’s squats. The picture below shows the difference between normal and abnormal femoral neck angles.

These changes in femoral neck angle can have implications on how much rotation you can achieve at your hip. People with a hip in more anteversion will have significant amounts of internal rotation but lack external rotation.

People with a hip in more retroversion will have significant amounts of external rotation but lack internal rotation. These variations outside the normal range are few and far between.

Johns Hopkins Orthopedics Department states that about 10% of children will have some form of femoral neck variation, but 99% of these variations self correct as the child continues to grow and develop.

The overwhelming majority of us have the ability to perform a mechanically efficient squat as described above. Most people with poor squatting patterns either lack the motor control to perform the movement or have significant mobility restrictions.

We may have not changed much physically from our ancestors a few hundred thousand years ago, but what have changed significantly are our life requirements.

Most people sit the majority of the day and rarely if ever actually perform a full depth squat. You can blame your poor squat on a fabricated congenital hip deformity if you would like, but it’s more likely your own damn fault.

Follow the principles as stated above, work on your mobility and do it often. Movement is medicine and you are the only one that can prescribe it.

Illustration 2 from Journal of the American Physical Therapy Association.