4 Drills That Will Improve Your Kettlebell Press

The following are some of the ways you can improve your pressing, or just change the feel of it, by using different variations to work on your weak points.

One of the things about kettlebells is that you can hold them in different positions and get a very different kind of press workout just based on your grip of the bell. Unlike a barbell or dumbbell, which you will hold in the same way every time, this dynamic grip can change the way you train.

Dr. Stuart McGill has done studies on the effectiveness of bottoms-up work and how the body responds. Gray Cook and Brett Jones have a book called Kettlebells From the Center – Dynami that deals with many different types of grip.

But it doesn’t stop there, as along with different grip positions we can also press from different positions. The use of kneeling postures is a favorite method of the FMS system, as it starts to take the body toward the functional standing posture without brining the legs into the equation. So, we start to have positions such as tall kneeling and half kneeling.

How to Improve Your Kettlebell Press

Many people struggle with kettlebell pressing as it has a different groove and feel than barbell work. The following are some of the ways you can improve your pressing, or just change the feel of it, by using different variations to work on your weak points.

Within the RKC, we often hear about the seeking of deep skill, or of the various lifts as being an “inch wide but a mile deep.” The press, for all its seeming simplicity, is no different.

Begin by assuming a tall kneeling stance. Tall kneeling is essentially standing, but from your knees – erect posture, long spine, hips tucked under slightly to tighten the glutes, and switched-on abs. Cheat curl a bell into the rack on one side and press.

You will discover some things immediately:

If you’re unfamiliar with what the Waiter’s Press looks like, check out the cover of Enter the Kettlebell. The waiter’s press is performed as per a normal press, but with the body of the bell on the hands, instead of held by the handle. Somehow, and I have no exact science for why, having the wrist flexed and the full weight of the bell in the hand allows you to feel your lat much better than straight pressing.

I like doing sets of 5, only for 1-2 sets as part of a warm up to focus on the lat before my heavy sets.

The BUP is an interesting drill. Interesting in that I have used it as a one-size-fits-all solution for a variety of potential problems with the press. Not gripping the bell tightly? The BUP will fix that. Not staying tight in your press? The BUP will fix that, too. But for our needs here – teaching you to keep the forearm vertical while initiating the press from the elbow – the BUP is ideal.

Imagine that the fulcrum (center of rotation) for this movement is not the delicate AC joint, but instead a point midway between the deltoid and the elbow, essentially halfway of the bicep. By focusing on having your elbow move around that point while doing a BUP, you will teach your whole body to engage during the press. Likely you will find this feels significantly different to what you have been doing when overhead pressing.

One of the things to keep in mind in relation to the BUP is that it has great effect up to a point. I don’t believe that past 32kg it does much to boost your press, as the skill becomes its own lift. Prior to that the BUP can be a valuable tool to teach you tension and alignment. Do not make the mistake of turning the drill into an exercise. The goal is never to have the best BUP in the world, rather to use the BUP to build your press and tame the Beast.

Low reps are a must with the BUP as the CNS fatigue from the high grip demand is intense. 2-3 sets of 3-5 reps seem to work best prior to your limit presses for the day.

The use of approaches such as the one-and-a-half method have long been used in bodybuilding to build time under tension and increase muscle size. In our case, we’re not overly concerned with size, but we can use this method to eliminate sticking points in our press – either off the chest or as you clear the head.

Option A – Can’t Move the Bell to Head Height

We’re going to use normal presses here, but at the bottom of each rep we are going to press halfway, return to the bottom position, and then do a full press to lockout. So one rep goes like this:

Option B – Can’t Extend the Elbow to Lockout

In this case we’re going to do a full press, lower the bell to the top of the head, and then finish the press again. This means you do an extra half rep in the top half of the movement. One full rep will go like this: 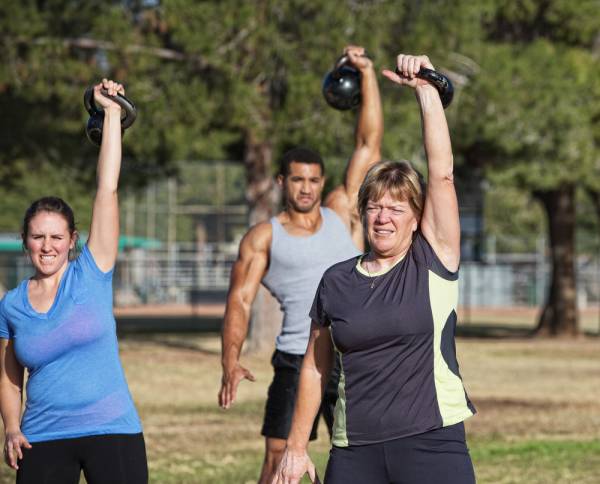 In both cases sets of 3-5 reps are ideal. If you want to make it even harder, add in a 3-5 second pause at the bottom of whichever point you are working on.

So in Option A, you’d pause for 3-5 seconds in the rack on both the first half-press and before starting the full press. This addition of the pauses will teach you how to keep tightness in the body and allow you to feel tension leaks.

If you’re struggling with pressing, think about where your weakness is and use one of these drills to fix it. You’ll find a little variety goes a long way toward keeping your shoulders healthy, as well as boosting your press.