5 Skills You Need to Compete Effectively in Brazilian Jiu-Jitsu

There are a few key ways to prepare for your competition to maximize your enjoyment and results during the event.

Competition season is in full swing in Jiu-Jitsu Land, and many people taking the stage at all belt levels are already seasoned competitors. In addition to devoting a significant amount of time to sharpening their jiu jitsu skill, these practitioners have also become conversant with what it takes to compete well.

Competition skill, while obviously related to straight jiu jitsu skill, has distinctions the aspiring competitor would do well to learn more about. Read on for five domains in which you might want to prepare, if you are considering throwing your hat into the Brazilian jiu jitsu competition ring.

1. Starting From the Feet

When it is time to roll during a typical jiu jitsu class, most academies have their students start seated or on the knees, due to space and safety considerations. These are good reasons to do this, but they put a would-be competitor at a disadvantage given that most, if not all, tournament matches start with the competitors facing each other on the feet.

“Spending some time familiarizing yourself with the five domains … will help you do what you came to the tournament to do: jiu jitsu.“

If you want to be an effective competitor, you would do well to become comfortable engaging on the feet, initiating takedowns or guard pulls, and defending those of your opponents. Otherwise, you might find yourself spending a lot of time working to play catch-up, points-wise (takedowns in most tournaments are worth two points), as well as psychologically (points or not, if your partner implements his or her strategy and you have none until one of you hits the mat, it can be difficult to recover your focus).

In addition to increasing your chances of controlling a match from the get-go, starting from the feet will also help you work on a second important competition skill: managing your and your opponent’s energy.

If you have never worked on takedowns, you might make the mistake of equating the energy requirements of rolling on the ground with those of engaging on the feet. But most practitioners find it far more exhausting to drill takedowns than to be on the mat. Entering a competition without learning where you fall on this spectrum and doing as much as you can to condition your body for engagement on the feet is ill advised. 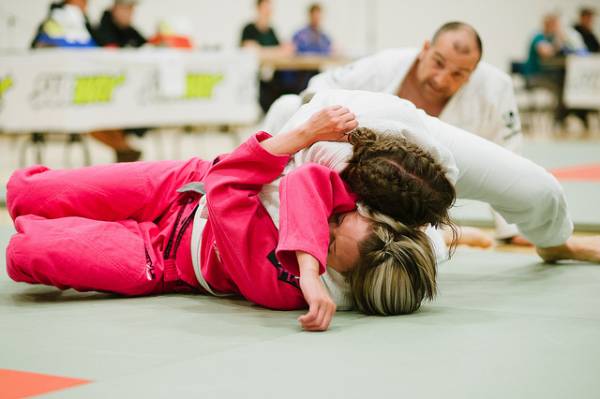 Part of the energy drain of squaring off on the feet can have to do with nerves. Lack of familiarity with the requirements of stand-up work can be accompanied by the feeling of being on stage, both of which can raise blood pressure and pulse rates. In other words, it can give rise to the competitor’s arch nemesis: the adrenaline dump. So, another element of energy management for competitors is becoming familiar with your own reaction to the fight-or-flight mechanism.

Still another energy management consideration has to do with learning how to parcel it out over multiple matches. Say you decide to register for a tournament and are eligible to participate in multiple divisions: gi, no-gi, your weight class, and the open division. You will be starting on the feet, “onstage,” for each match, and you could have anywhere from one to many more than one match in each division. In other words, you could end up contesting many more matches than you normally would at the end of a typical academy class, or even in an open mat, while also contending with significant additional cognitive and energy demands.

“If you want to be an effective competitor, you would do well to become comfortable engaging on the feet, initiating takedowns or guard pulls, and defending those of your opponents.”

And finally, in each of these matches, you will be squaring off against an opponent who wants the same thing you do – victory. So yet another energy consideration for the would-be competitor is the energy level of the opponent. Rest assured, it is likely to be intense and directed at doing whatever is legal – and maybe even legal-adjacent – in order to win. If you have not experienced that kind of intensity, you may be in for a surprise as soon as your opponent makes contact with you.

The first few times I competed, I was overwhelmed by sensory overload. I felt bombarded by the lights of the venue, the huge-seeming expanse of the competition mat, and the expressions on the faces of the other competitors, among many other things. I heard cheering and a booming voice over the loudspeaker announcing brackets and names. I felt my own heart beating. Oh, and nausea. I felt lots of nausea. 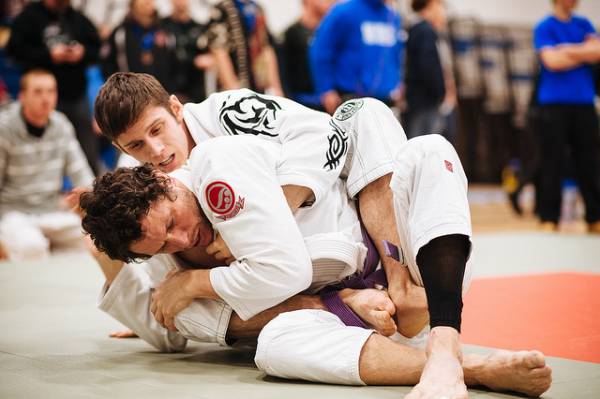 Then, during the match, I couldn’t hear or see anything, and all I could feel was the resistance of my opponents and my own labored breathing. Slowly, as I participated in more competitions and logged more matches, I became more effective at engaging with my opponent using part of my awareness, while other parts became able to listen for my coach’s voice, keep an eye on the timer, obey commands from the referee, and even occasionally appreciate the cheers from my friends and teammates.

I learned to ignore the referees on other mats, the cheers of my opponents’ teammates for them, my own fears and fatigue, and other stimuli that had no relevance to what I was trying to accomplish. Much as I wanted to head over to the acai stand, for instance, I had to pretend it did not exist until I had done my work.

Another domain in which effective competitors are well versed is that of tournament rules and etiquette. While various tournaments may have similar rule sets, it is important for competitors and their coaches to familiarize themselves with the rule sets for the specific tournaments in which they are participating.

“In other words, you may be in a state in which you have less control over your emotions than you normally would. But this does not give you permission to splatter them all over the assembled masses.“

Many’s the time competitors have been disqualified for applying a technique they thought was legal in their particular division that was actually not allowed. Rule sets are usually available on tournament websites and are categorized by belt level, gi/no-gi, and age, so it is generally not a problem to become familiar with them. In addition, many tournaments will hold rules meetings prior to the start of the events. And keep in mind that sometimes your coach may be busy coaching one of your teammates when it comes time for you to compete, so the more informed you are, the better.

A closely related domain is that of tournament etiquette. Sportsmanship is expected, as is the ability to follow the commands of the mat coordinators and the referees. This includes things like refraining from using profanity or arguing with the referee during the match.

Part of the reason you might want to use profanity or argue with the referee is because your emotions are running high. You are exerting yourself, may be fatigued, and have worked hard to get to this point, so you want to win. And the fact is that sometimes you will be on the receiving end of calls you do not agree with. And/or perhaps you were less familiar with the rules than you may have thought. Both things happen. 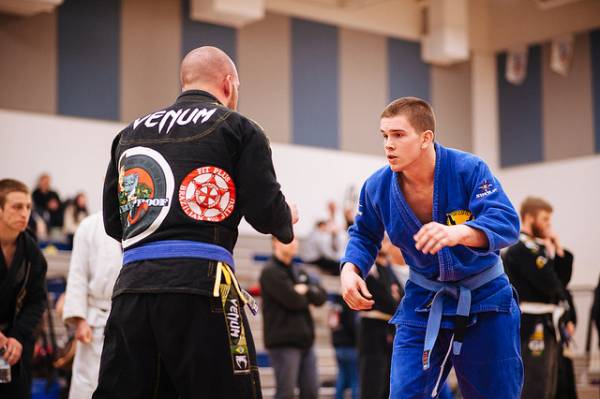 Or perhaps you have just had your hand raised by that referee in the finals match, so you are exhilarated, as well as fatigued. In other words, you may be in a state in which you have less control over your emotions than you normally would. But this does not give you permission to splatter them all over the assembled masses.

It is frowned upon at most any tournament to throw a tantrum of any kind if you lose a match. On the flip side, it is also frowned upon to showboat or grandstand if you win. Competitors have been disqualified for excessive displays of emotion on either end of the spectrum, so while it is understandable that you would experience corresponding emotions depending on the outcome of a match, learning to express them appropriately is a nontrivial matter. And, as with learning to execute an armbar, doing so is something that comes with time and practice.

Competing in Brazilian jiu jitsu is a potentially rewarding experience, and one that can help you with your jiu jitsu skill. But given the current competition environment, it is important to go into any tournament having trained hard and having educated yourself as much as possible about the rigors of competing. Spending some time familiarizing yourself with the five domains above will help you do what you came to the tournament to do: jiu jitsu.

What are some other skills you have had to learn to enable you to be an effective competitor in jiu jitsu? Post your experiences to comments.