7 Reasons Kettlebell Sport Is for Everybody

I truly believe kettlebell sport to be the everyman, or everywoman, sport. Here's why.

If you have ever watched a kettlebell sport competition here in the UK, you know that it is endurance weightlifting. The kettlebells are jerked, snatched, or cleaned and jerked for ten-minute sets.

I have seen the same trend in other countries. Nowhere was it more obvious than in Hamburg at last year’s IUKL (International Union of Kettlebell Lifting) World Championships. The youngest lifter amongst the five hundred men and women competing was thirteen-year-old Rylee Reeves from the USA, and the oldest lifters in the senior category were Russian gentlemen in their seventies.

Kettlebell sport is attractive to a wide population as it has a relatively low level of injuries compared to other strength sports. This is due to the nature of the sport itself. The weights used are not maximal. The heaviest weights used are two 32kg kettlebells for professional-level male lifters. These are not an easy feat to lift for ten minutes at a time, but nowhere near as heavy a load compared to Olympic weightlifting, powerlifting, or strongman. The emphasis is on endurance and volume, so the lifting techniques are developed around extreme efficiency and relaxation, and tend not to batter joint and connective tissues too much. 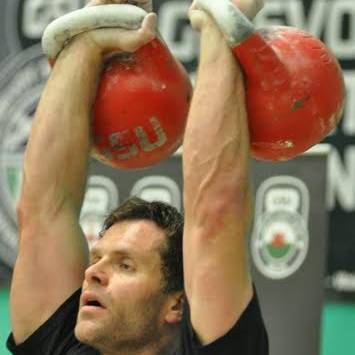 It is easy to get started with kettlebell sport. The variety of weights used in comps, especially at national level, means most people will be able to give it a shot, even with a relatively short period of training. Women can begin with 8kg kettlebells and men will usually start off with the 16kgs bells. These weights progress in jumps of 4kg until reaching the limit of the professional categories – 24kg for the ladies and 32kg bells for the gents.

Also, here in the UK, there are around five to six regular competitions every year, always held at weekends, which means easy access for most.

This is one of the aspects I love the most. Most of the comps I have taken part in, either as an athlete or as a spectator, have had a friendly and relaxed atmosphere. This includes the World Championships, where ties of mutual respect and friendship were forged amongst lifters of so many different countries and backgrounds.

“The UK kettlebell sport community has grown throughout the years and it always nice to see old and new faces enjoy the friendly atmosphere every time an event is held.”

All lifters know the effort and sacrifice it takes to be on that platform and so respect each other’s efforts. The UK kettlebell sport community has grown throughout the years and it always nice to see old and new faces enjoy the friendly atmosphere every time an event is held.

If you are feeling inspired and thinking of getting involved in kettlebell sport, want to make a positive impact on your conditioning and general health, and would like to be part of a community that is growing rapidly in the UK, there is no time like the present to make the leap.