Hardstyle, Girevoy, or CrossFit? How to Decide Which Kettlebell Style Is Best

I find it difficult to believe that a simple tool of strength can be used so differently. Here is an overview of their differences (though, there are also many similarities).

Kettlebells have been used for quite some time in Russia and the former Soviet Union. They were brought to the United States in the late 1990s. There is some dispute on whether Valery Federenko or Pavel Tsatsouline brought them to the U.S. (this dispute is one of the reasons for the contention between different styles).

However, Pavel is considered the person who popularized them in America. (Pictured left: Girevoy Sport Kettlebell; Right: Hardstyle kettlebell.)

Valery Fedorenko is known for bringing the kettlebell sport style to the United States and is the founder of the World Kettlebell Club. However there are other notable kettlebell sport associations, such as Steve Cotter’s International Kettlebell & Fitness Federation and many others outside of the U.S.

The key feature of the sport style of kettlebell is that the focus is on power efficiency over a long period of time. Most events are ten minutes long and the participant is not allowed to put the kettlebell down.

Thus, the person is trying to conserve energy in the movements so that he or she can be efficient over time. In the below video, you can see how the athlete’s movement is fluid and how she is never out of breath over the allotted time period. (By the way, she is using a 22kg (48.5lb) kettlebell.)

Some other key features of this style of kettlebell use is that only one hand is on the kettlebell at a time (i.e. there are no two-handed swings). This explains the different handle design of the two kettlebells in the above photo. The thumb locks the index finger onto the kettlebell (almost like a hook grip), so that grip strength does not play as much of a role.

Another big difference is breathing. Breaths are taken efficiently and they flow with the movement. There is no pressurized breathing that accompanies other styles of lifting (It is more like this than this.)

Hardstyle is a style popularized by Pavel Tsatsouline, who used this style to train Soviet and American military, police, and special forces. This style can be summarized by high intensity and few repetitions. Power optimization is the key rather than power conservation. Each rep should look just as powerful no matter if it is 12kg or 48kg.

This style focuses on a balance between high tension and relaxation. For example, in a kettlebell swing there is an explosive hip hinge and then relaxation as the kettlebell floats up. It is a ballistic exercise in that the kettlebell is launched with an explosive movement and then is guided into position (as opposed to a grind where tension is applied throughout the movement).

This style has historically taken components from the martial arts, and it relies on being able to switch quickly from being tight to being loose. Similar to a martial artist who quickly becomes tense when a punch is thrown. A punch is similar to a kettlebell swing as it is ballistic. A deadlift is a grind because tension is applied throughout the movement.

The concept can be compared to sprinting, where the sprinter becomes tense and loose repeatedly throughout the sprint. Sprinters who are tight do not run as well.

Breathing is one big difference between Hardstyle and Girevoy. In Hardstyle, the breath is used to bring more power to the movement. That is, the stomach is pressurized with air and the air is released in small amounts as the movement is conducted (almost as little grunts).

This style of breathing is different than what is done in endurance or power efficiency movements where the athlete is trying to use diaphragmatic breathing to keep the heart rate low. For example, someone doing an endurance event would use long, deep breaths to slow the heart rate.

A Note on RKC and StrongFirst

In late 2012, Pavel Tsatsouline left the Russian Kettlebell Challenge (RKC) to start a new endeavor, Strongfirst. There were probably plenty of reasons for this split, but as of now both of these groups remain relatively similar in their style of teaching (there are minor differences in standards, but in general most of the teaching are Pavel’s and they remain the same). 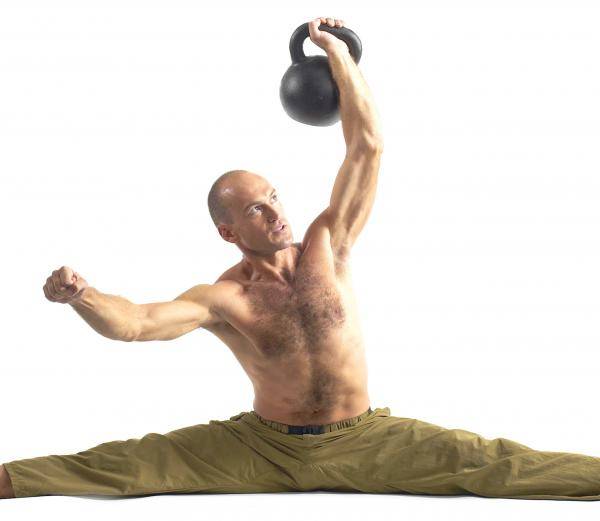 One of the reasons for the new organization is that Pavel’s teachings have always extended past kettlebells. In the late 1990s and early 2000s, he wrote articles that did not mention kettlebells at all. Most of my first exposure to his teachings were from popular bodybuilding magazines (e.g., the Smolov Squat routine).

Pavel’s style tends to be about being very strong for short durations of time. This type of training fits with what he has done for military and police units as most likely they need explosive strength rather than longer term efficiency in movements. (This division of power optimization versus power efficiency will be discussed further in an upcoming series of articles.)

Much of CrossFit’s use of the kettlebell comes from Hardstyle (Jeff Martone who leads CrossFit’s specialty training on kettlebells was one of Pavel’s first students). However, there have been some major modifications of the lifts that have been quite controversial.

One controversy is that the two-handed swing goes overhead rather than to shoulder height. As Andrew Read elegantly pointed out, there are many problems with mobility and the safety of this “American swing” movement. I have heard it compared to adding a shrug after a deadlift is completed. We can certainly add more movement to the lift, but why? (Wait, the sumo deadlift high pull is almost the same idea.)

Another point of view suggests that people start with the Hardstyle swing and eventually move to the CrossFit style of swing if mobility allows. The problem with this moderate approach is that the CrossFit standard describes being overhead as the end point of the movement. Thus, patience would have to be practiced by athletes in that they would not begin by doing the movement to the standards (even though they might be practicing a safer movement).

The kettlebell snatch should have more of a hip hinge, but setting it on the ground can lead to a more vertical motion (I have seen it described as a starting-a-lawn-mower in a straight up and down motion). This vertical movement might be more taxing (i.e., dangerous) on the shoulder. I have not seen as much discussion of this issue. However, watching competitors do this movement leads me to believe that much more discussion of kettlebell snatch technique could be used by the CrossFit community.

How to Decide on a Style

In general there are probably more similarities than differences between all the styles. Both the Girevoy (pictured to the right) and Hardstyle movements are probably relatively safe to perform and there are intensive certifications and courses for learning the movements.

Some have questioned the safety of the CrossFit American-style swing based on the mobility requirement of getting the arms overhead (at the top position, the hands are close together, which causes internal rotation of the shoulder joints and might lead to shoulder impingement in those lacking the required mobility).

Thus, from an anatomical discussion there might be safety issues with the CrossFit swing. However, there has not been a definitive research study showing this safety issue (and there might never be one). 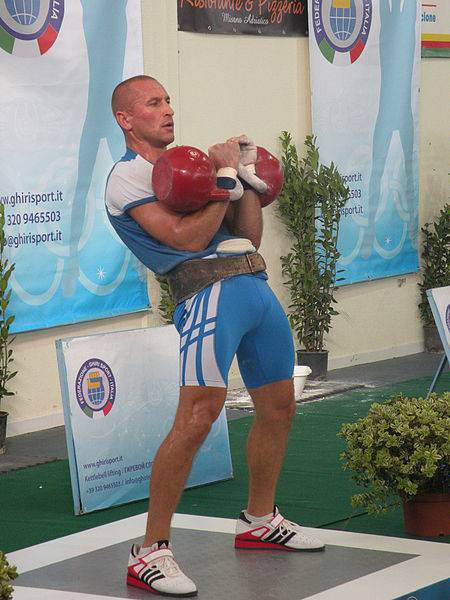 The Hardstyle and Girevoy Sport styles both promote fitness in different ways. However, StrongFirst requires all instructors to be able to do 100 kettlebell snatches in five minutes and to do grinding movements such as get ups. Thus, there is a component of strength endurance as well.

An analogy might be a 100-meter sprinter and an 800-meter runner. Each runner will utilize strength, explosiveness, and muscle efficiency, but in different ways. What works best for overall fitness, sport-specific physical preparedness, or military and first responders are questions that have not been answered.