Although the bench press is the most common exercise done in many gyms, it’s not the best example of strength, at least to me. While benching is a great exercise, I prefer to do most of my lifting while standing. I find this translates better to the majority of other things I do in my life. For that reason I much prefer overhead pressing to the bench press.

There are many different ways you press overhead. For this article we’ll focus on using the kettlebell, although all except one of these exercises could just as well be done with a dumbbell, or even a barbell in a single hand. Some of these variations could be done just as well with two hands, but some cannot.

By working in these different styles you’ll have greater command over your body, be able to handle heavier weights, and be more efficient in how you handle anything based on what you’re trying to do.

Do you know why this exercise is called the military press? It’s because long ago it involved standing at “military attention” and putting the weight overhead. This meant your heels touching. These days that is generally not done, but instead the movement involves a strict press with no bend in the torso. Because of this the shoulder and triceps have to do all the work at fairly poor leverage and you can handle less weight than in any other style.

In an average gym if you were to do a side press people would think you’re doing a military press all wrong. But this old-time lift allows you to handle significantly more weight, as your press is stronger out to the side than straight overhead.

To do a side press, take a slightly wider stance than the military press. Your feet can be pointed in the direction you’ll be leaning. As you begin the press, bend to the side away from your arm. The degree you bend will depend on how heavy the weight is. A side press can involve quite a significant bend. Once the arm is locked out you can come to a standing position.

The bent press is also known as the screw press and is different from these other exercises. The idea is not to actually press the weight overhead, but to support it as you get under the weight. It’s quite a technical lift and will take much practice but when mastered you can handle very heavy weights. Among strongmen it was not uncommon to do this lift with over 200 lbs., while the record is still held by Arthur Saxon at 370 lbs.

Start in a similar position as the side press. Keep your elbow on or behind the hip. Bend away from the weight while you keep your upper arm in contact with your body. Keep lowering your torso until your arm has straightened all the way. Usually your free arm will touch your leg to help in supporting your position. With a kettlebell you may not need this but with heavier weights you would. Once the arm is locked out you’ll either overhead squat or windmill up to a standing position.

The rotational press is something that is used by professional kettlebell lifters. In this you generate momentum for the press by rotating your body. It’s an interesting variation that takes some getting use to, but once you have it down it’s an efficient way to press a kettlebell. 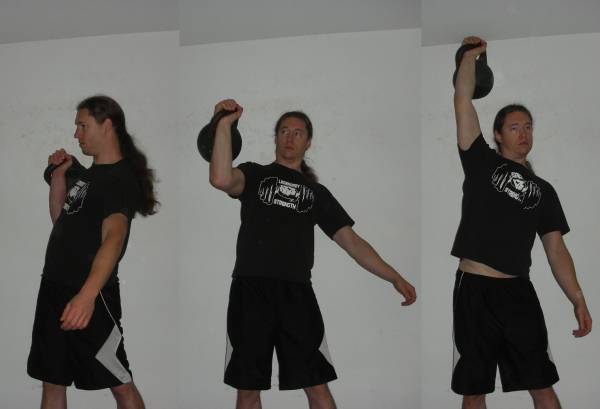 The regular push press, which involves the legs, will be covered next. But did you know you can use your upper body to generate momentum in a similar manner? This allows you to be explosive in the movement, which can help to power you through the sticking point and put heavier weights overhead.

Start in the ready position. Bend your body slightly towards your press arm to “load” your body. This can be towards the side as well as a little forward. From this loaded position expand your chest upwards to launch your arm and continue the press until its overhead. 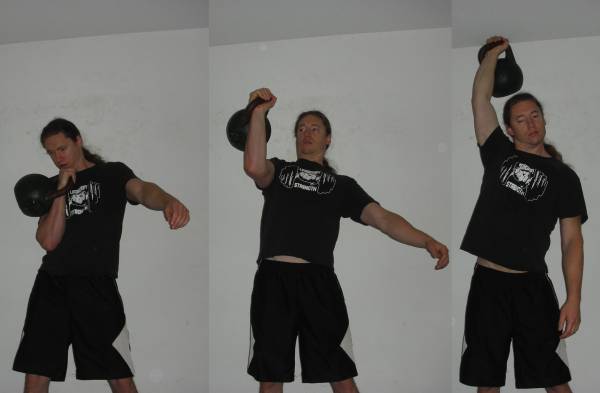 The push press involves the use of the legs. Since the legs have powerful muscles, this will allow you to handle much heavier weights than with many of the other presses.

Bend the knees forward then explosively extend them as you press with your arm. For best effect the elbow should be resting on or near your hip so that you can drive the leg power straight through it and really minimize the use of your arms.

Another version of the push press would involve doing a slight squat, hinging at the hips. This is more often used with heavier weights, but since a kettlebell is light is comparison you can get by with just a slight flex in the knees to help drive the kettlebell overhead. 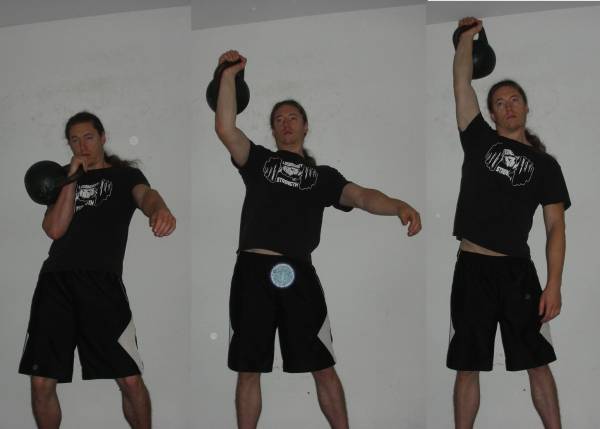 The jerk is similar to the push press but it involves a second dip of the legs meaning you can use your arms even less. In fact the jerk is not a press at all. Your hand and arm are just supporting the weight as it moves from one position to another, while all the work is done explosively by the rest of the body.

Bend the knees forward then explosively extend them. Once again, starting with the elbow on the hip helps a lot. This initial launch should send the kettlebell to head level or beyond. From here you dip your legs again, extending your arm. Since you don’t have to press the kettlebell as far, as you’re getting under it, your arm doesn’t press at all but should come to a complete lockout. From here stand up to complete the rep. 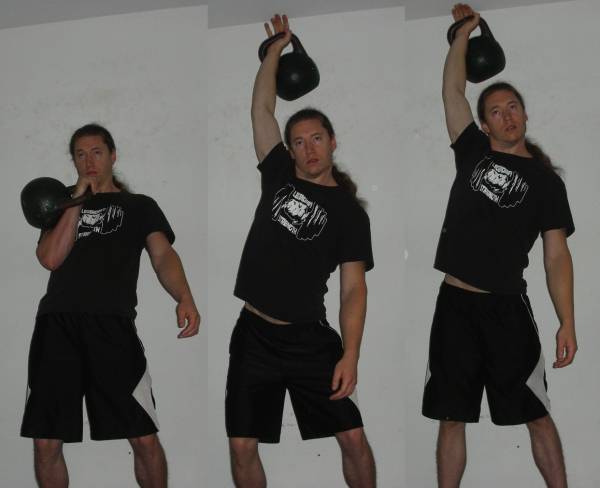 The bottoms up press is a unique exercise that can only be done with kettlebells. It works the grip significantly and requires some balance as well. While this exercise can be done with any of the press variations here, it is most often done in the strict military style.

Clean the kettlebell so that you are gripping the handle with the mass of the kettlebell above your fist in a balanced position. Do a press keeping the kettlebell bottoms up the entire time. Keep your eyes on the bell to help keep the balance. 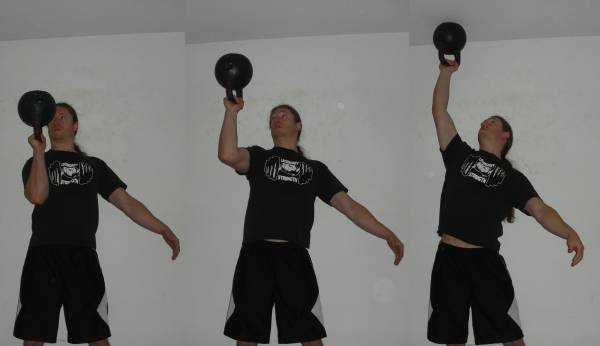 If you’re trying to become stronger you need to do some kind of pressing – and you can do this with bodyweight, kettlebells, barbells, or anything else. The great thing is that by using a variety of presses you’ll be able to use your body in different ways and have greater command of it. Plus the different variations can be useful to break through plateaus you may encounter.