Weightlifting is not a sport that owes a lot to humor. While many weightlifters are inveterate joke tellers, the jokes usually are derived from other activities and not from their sport. Maybe there just isn’t that much humor to be mined from the iron game.

The Brief History of Humor in Weightlifting

Despite this though there have been some exceptions. Those baby boomers among you will remember one time Canadian national coach Wes Woo’s cartoons in the old Strength and Health magazine. These featured “Cus the Coach” and his hapless lifter, “Failure Fred.”

In the same magazine, Woo’s fellow Vancouverite John McCallum wrote a humorous series called Keys to Progress. It featured a man harassed by his Uncle Harry and a kid named Marvin, his daughter’s boyfriend whom they were trying to train. While some of the training advice is now questioned, the articles are still good for a chuckle. Another cartoon I remember was one where a bodybuilder with a huge left arm and a skinny right arm was being paged by other gym rats using his nickname of “Lefty.”

Those cartoonists outside the field invariably like to play on the possibility of a lifter dropping the bar on his toe. Not so funny to those who experience this, but fortunately it is a rare occurrence. I remember another treatment, in Playboy magazine if I remember correctly, where a lifter had a heavy weight overhead when his lifting trunks fell to his ankles – and someone in the crowd then suggested, “It must be a record.”

Bodybuilding probably provides more humor opportunities due to the unusual proportions of its participants and their alleged narcissism. Olympic lifting has had few cartoon treatments and even fewer jokes told within a lifting setting. Recently though, I came across one that was specific to our sport and that will get a nervous laugh out of all of us, especially those of masters age.

A Weightlifting Joke: Pat and Mike

The story stars two lifting aficionados named Pat and Mike. They were lifters in their youth and continue their involvement by attending every major competition, not only in their native Ireland, but those in Britain and on the Continent as well. All the world championships, all the European championships, and who knows what else. They never miss any.

But they are both getting on in years and starting to worry about the hereafter. One day Pat says to Mike, “Let’s be having an agreement. Whichever of us be going first, let him try and contact the other to let him know what life be like on the other side.” Mike says this is a great idea, but does not take it too seriously.

Well, a few years go by and one day Pat finally succumbs to heart problems (not caused by weightlifting, in case you’re wondering). Mike remembers their agreement and remains on high alert looking for some sign of Pat on the other side, but doesn’t really think any such thing will happen.

Several months go by and one day Mike answers his iPhone at a masters-level meet. He picks it up and is astounded to hear his old friend Pat on the other end. After being picked up off the floor, Mike eventually regains his composure and asks what it’s like. First, he asks which direction Pat went, “Up or down?” Pat happily answers that he is in Heaven. This brings great relief to Mike because he thought that Pat might have easily been sent to the nether regions to shovel coal for eternity. He also assumes that if Pat can make the qualifier for Heaven, then so can he when his time comes. 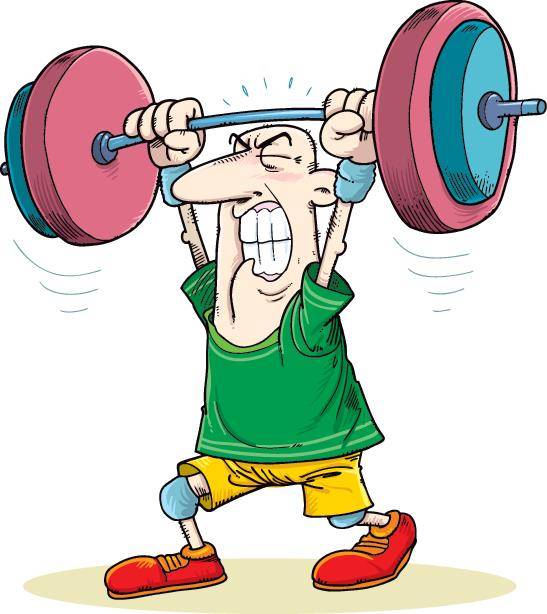 Pat replies, over a perfect phone connection, “What is it like? Well, I have good news and I have bad news.”

Mike then responds in his County Cork brogue, “Well, let’s be hearing the good news first.”

With that Pat goes on to explain what happened to him. He says that the accreditation process was very quick, even faster than any well-run competition he had ever been to. He met St. Peter and was soon assigned to a section of Heaven where they had a gym. And what a gym! They had gold-plated Eleiko bars, fine wooden platforms, and nobody broke into a sweat. Best of all, Guinness was stored in the gym cooler. They had competitions every weekend and everyone improved their total each week. In fact, Pat claims to have made his first 400-pound press two weeks prior.

Astounded, Mike asks, “Do they still do the press up there?”

“Oh, yes,” replies Pat. “But the referees aren’t be allowin’ much nonsense. Only military presses. And we all are doin’ personal records regularly. I hope to jerk 500 soon.”

“Wow!” Mike replies, so impressed with this news that he is almost hoping for an early demise himself. Then he remembers Pat’s comment about there being both good news and bad news. He thinks that he better look at both sides of the situation. Gathering up all of his courage, Mike asks Pat, “Well, let’s be hearing the bad news then.”

Just as nervously, Pat answers, “Well, the bad news is, I saw your name entered in the 85-kilo category for this Saturday’s meet.”