The other morning I woke up to find that my right ear was clogged. I jammed my pinky in there, just like you’re not supposed to do.

I moved my jaw around hoping for that pop of relief that you can get during swift altitude changes in an airplane. I shook my head to my right side like people do to dislodge water after they emerge from a swimming pool. No luck on any front. My ear was completely blocked.

BJJ and Your Ears

I had been here before, and I knew what the problem was. When I train BJJ, I frequently like to use my head as a fifth appendage to control my partner’s movement: putting it under my partner’s chin, in the armpit, in the middle of the chest, and on and on. Some people who do this end up with a bumper crop of cauliflower ear.

With the exception of a few flare-ups that I nipped in the bud, I have been able to dodge that bullet, so my ears do not resemble lima beans. And I plan to keep it that way. But what I do apparently get for putting my head where it’s not wanted is even sexier: a gradual buildup of wax that eventually blocks my entire ear canal.

Usually I can take care of it myself, but there have been one or two times when I’ve had to visit the doctor for a pseudo-surgical gunkectomy. Those times, I was dealing with blockage in both ears that I couldn’t loosen on my own, which means I was walking around stuck inside my own soundproof chamber. One doctor in particular, after clearing out my ear canals and showing me what had been crammed up there (Why do they always show you?) looked at me with utter disgust, as if to say, “I did not go to medical school for this.”

But this time, I took matters into my own hands, planning to go to the doctor only if necessary. There are several recommended ways to remove a preponderance of earwax. The method that has worked best for me is repeated flushing of the area with hydrogen peroxide, which softens the wax, followed by using a mini turkey baster-looking device to shoot a stream of warm water into the ear canal to get that hashishy-looking junk (I base this description solely on Internet research) outta there.

So I started the day with a cup of coffee, followed by several minutes of lying on the floor on my left side while the hydrogen peroxide I had poured into my right ear bubbled like a witch’s cauldron. Then I went to the sink and tipped my head so my right ear was pointing downward, aiming the tip of the turkey baster of warm water into my ear and letting fly.

I finally cleared my ear that evening, but not before, I would estimate conservatively, eight to ten sessions of hydrogen peroxide plus turkey baster. After about the fifth round, I began to wonder how I would explain this if, let’s say, my neighbor came by for some reason and I answered the door with my hair slightly wet and a ratty towel around my neck that was dotted with tan stains.

“Oh, hi there. No, it’s not blood. It’s earwax. Yeah, it got all clogged up. So speak into this one! Haha. Well, it’s from jiu jitsu. JOO JITSOO. Long story. Oh, you have to go? Did you need something? You sure? Well, of course I would wash my hands first. Okay, suit yourself. Byeee!”

What “Normal” Means to the BJJ Practitioner

When I thought about it more, I realized that BJJ had caused me to create a “new normal,” a life full of choices that had become de rigeur for me, but that, if I explained them to people who don’t train, would probably seem completely batty. And when I thought about it still further, I realized I had absolutely no problem thinking of other examples of what might seem odd to an outsider but was just part of a typical day for me and for many of the other grapplers I know. 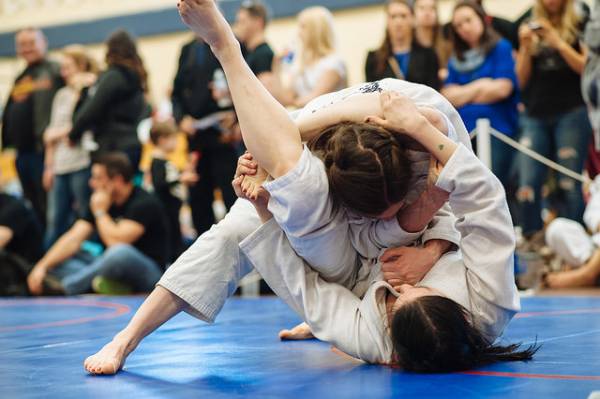 Here are a few other real-life examples:

A family I met – a mom, dad, and two kids – who all train BJJ together, told me that in their house, everyone walks around with their chins tucked, all the time. Because you never know who might come up behind you and try to slip on a rear naked choke.

I can’t even count the number of times during class that I have carried on lengthy conversations with training partners while mounted on them or underneath their mount, or with one of us in closed guard. These aren’t even necessarily jiu jitsu-related conversations, just lulls in the training that we filled with chatting or even deeper philosophical musings.

A friend just the other day told me about how he went to a drugstore to get syringes to drain his cauliflower ear. They didn’t have SAM splint, which is a combination of thin sponge and metal that you can clamp around the ear to keep it from filling up again once you’ve drained it, so he also bought duct tape instead, hoping that would do the trick. He commented that due to the combo of the needles and the tape, the cashier gave him a little bit of the stink eye.

Also in the cauliflower vein, I have numerous male friends who express their grappling personae by night but have whiter collar identities during the day, identities that require them to wear ties and act professional. They look nice in their suits, and they are good at what they do, but while they are in professional mode, they frequently have to endure furtive glances at their ears, which resemble nothing so much as chewed gum.

These are all examples of the day-to-day behaviors of some grapplers that might look strange to outsiders. They don’t even cover the bigger crazy things some people do, like quit their jobs, sell their homes and travel around the country, or otherwise completely change their lives around to accommodate their love of Brazilian jiu jitsu. But people do those kinds of things as well, and it is these big things that give rise to the smaller but still decidedly off-the-beaten-path routines.

Have the demands of your training, whether in BJJ or in something else, prompted you to adopt habits that constitute a new normal? Describe them in comments.