Did you celebrate National Donut Day on June 5? I know I did!

I practice flexible dieting, and in honor of this wonderful holiday, I decided I would most definitely be fitting a donut into my macros. So, I went to the Dunkin Donuts online nutritional calculator to see what I would be working with. I was craving a donut with some kind of peanut butter flavor when I spotted the peanut butter creme donut.

I was not surprised to see that the macros were crazy for one measly donut. One donut had 320 calories, 19g fat, 36g carbs, and 3g protein. I was not about to try to fit that nonsense into my macros, so I decided to make my own version.

The nutrition info for the Dunkin’ Donuts version.

Macros for one donut:

Not too shabby! Especially when you look at the whole batch that this recipe makes.

Macros for all eight donuts:

So, you could eat eight donuts for the same amount of calories as two of those donuts from Dunkin. That sounds great to me! Okay, so how do you make these beautiful bad boys? 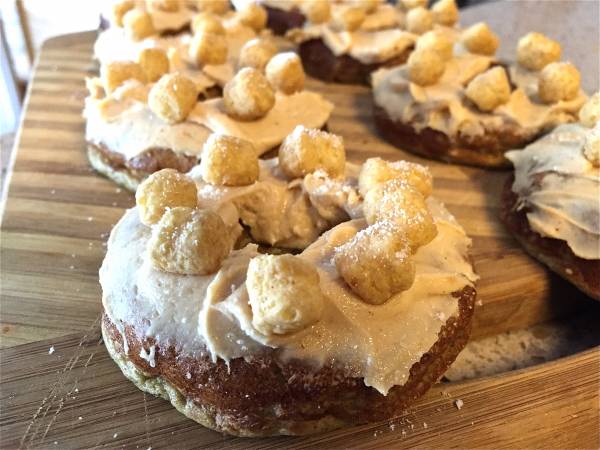 Now it’s game time! You can have four donuts for the price of one. I’ll take those numbers any day of the week. And you are getting 36g of protein for those four, instead of a measly 3g of protein from the Dunkin Donuts version. Enjoy!

Zach is the Owner and Head Coach at Genetic Potential Academy in Fernandina Beach, Florida. He is a Precision Nutrition Sports and Exercise Nutrition Certified Coach and is currently working on his Precision Nutrition Level 2 Masters Coaching Certification. He is also a Certified USA Weightlifting Sports Performance Coach.

Zach utilizes his knowledge and experience to teach everyone from athletes to 75-year-old grandmothers how to live the life they want through high-quality strength training and flexible dieting.