An Analysis of Interesting Weightlifting Records and Trends

Every year about this time I take a look at the world records in the sport of weightlifting. I guess it’s the accountant coming out in me, as I like to do a bit of horizontal and vertical analysis of the best performances in our sport. I am not going to repost all of the records here. Those are easy enough to find on the IWF website. I will simply report the trends that I see and what they might mean in the future.

No Surprises for Men’s Seniors

The IWF keeps records for seniors, juniors (those under twenty), and youth (those under eighteen). Those in the teenage groups may set records in older age groups if they are so able. Such age-group records are also kept for both sexes.

I will start with the men’s senior world records. There are few surprises here as all the records are about where you would expect them to be, with no anomalies. Big lifters lift more than little lifters all the way up the weight categories.

If you want to compare the quality in the weight categories, then weightlifting has a thing called the Sinclair formula, which essentially equalizes body weight. When applied to the actual total made by a lifter in competition, it gives you a figure that would be what the lifter would do if he were a super heavyweight of similar skill level.

Unlike boxing, we do not use the term “pound for pound” since strength goes up as a logarithmic function, not a linear one. Bigger lifters will lift more than smaller ones, but not in proportion to their body weight, and therefore “pound for pound” would give a permanent unfair advantage to the lighter categories. If we apply the Sinclair formula to the senior world record totals, then we find them to be fairly uniform. That is not surprising since the formula is geared to the previous four years results.

The average Sinclair score for the eight men’s categories is 476. The lowest was 471 and the highest is 482. Not much variation. This shows that the talent pool is quite mature, with no categories lagging significantly behind. You can calculate your own Sinclair by clicking here.

College Lifters Can Be as Good as the Best

The layperson’s idea that you can’t get strong until you are in your twenties is simply incorrect. Put into terms the layperson can relate to, this means that by college sophomore age lifters can be almost as good as the best in the world.

Now let’s move down to the youth categories. They lag behind a little bit in that their world records are only 89.9% of the senior world records. It appears those two years make a difference. People do not mature at the same rates so on average lifters under eighteen cannot be expected to lift as much as the seniors.

But what is surprising are the outliers. The most dramatic is the Olympic champion Ilya Ilyin of Kazakhstan (pictured below), whose clean and jerk of 216kg as a youth was also good enough for the junior world record. The current world record in the seniors is now at 218kg. So here we have a man jerking 99.1% of the world record at age seventeen or eighteen. This helped bring the average up, but still most youth world records were in the high eighties and low nineties percentage-wise. It will be interesting to do a longitudinal study on these youth world record holders to see how well they do as they graduate. 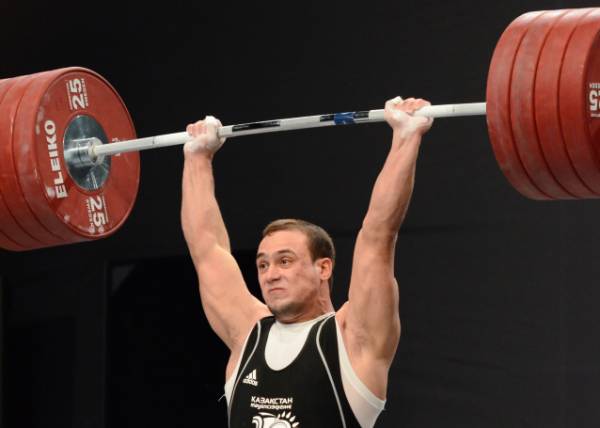 Looking across the male age groups at their snatch percentage of clean and jerk we see the average being 83.1% with little deviation. This is higher than the 78% that was considered ideal a couple of decades ago. This is a significant increase and begs for more study. Technique has changed slightly, but has it changed that much? Lifters have gotten taller in recent years. Perhaps that helps with the snatch mechanics. Mr. Takano, do you have any ideas?

Now let’s move over to the women. They show a similar high standard for their juniors at 97.5% of the senior marks. More significantly, their youths’ average is 93.9% of the senior marks. This is significantly more than the male percentage. I wonder why this is so? Perhaps it is because female bodies mature earlier and therefore there’s a greater percentage of women lifting at this age with a fully adult body.

Another reason might be that many women do not stay in the game as long as their male counterparts and therefore do not reach their full potential as seniors. The result would be youth marks proportionately higher as their senior counterparts drop out sooner. But that’s just a guess. It would require a bit of research to get a definitive answer.

Female Performances Are Closing the Gap

Now comes the interesting part – that of comparing female performances to male ones. What was found here is that women’s world records ranged from 73-76% of the male records. This is considerably higher than the two-thirds (67%) figure often given for the typical female-to-male strength ratio.

The reason for this disparity probably has to do with lifestyles of the average person versus those of serious lifters. In the non-lifting population, men are generally stronger than women due to greater heights and subsequently greater muscular body weight, and possibly also because they tend to do more things that develop the musculature.

But under sustained and systematic training that disparity can be narrowed significantly. It might be argued that many female weightlifters are outliers by definition, more gifted in the strength department than their non-training sisters. Still, we see all body types among female lifters, even more so than male ones, so I think the effective training is still significant. Will this percentage go higher as more women compete?

Now let’s look at the countries that own these records. Among all age categories there are 72 men’s world records. Nineteen of them are owned by the Chinese. Thirty of them are owned by countries that made up the old Soviet Union. Seven more are owned by former Soviet satellites. It would appear that any gloating over a Russian collapse is a bit premature. Many of the old Soviet stars were from the other fourteen non-Russian republics. If Russia could reclaim these athletes (I hope that Putin is not reading this), they would still spend a lot of time at the top of the podium.

Finally we will come to the women’s countries. There are 63 world records to be had there and China owns 28 of them. Russia owns 22 and Kazakhstan eight. Turkey and North Korea own three and two respectively. So it looks like the old Soviet countries and satellites still own half of the records and their red rival China holds most of the other half.

Lifting in the rest of the world has developed faster than it has in the old Communist Bloc, but we still lag behind. Ironically the big reason has been the breakup of the Soviet Union. Almost all of the constituent republics have very good athletes and they have now pushed lifters from other countries ten to twenty places lower than they normally would have in the old days. It would appear that the old East Bloc weightlifting structure is not dead by any stretch of the imagination. So get back to the gym.