Antioxidants are commonly used to help protect against stress and the potentially harmful effects of exercise, but not as many people use them to increase athletic performance. A recent study in the Journal of the International Society of Sports Nutrition put antioxidants to the test for this less common purpose.

Exercise creates what are called reactive oxygen species (ROS). They are a normal part of everyday life, but in high quantities ROS are also thought to be the major cause of aging and a possible contributor to cancer. The higher number of ROS that results from exercise increases the need for antioxidants, which eliminate ROS. Through acclimatizing to exercise, athletes can actually have greater antioxidant stores, and thus greater capacity to handle stressors like exercise in a healthy way.

This study was concerned with the acute effect of antioxidants on exercise. There were fifteen participants who each attended three exercise sessions. The first session familiarized the participants with the setup and the back squat, which was the exercise they all performed. The researchers also determined the three-rep-max of each participant on that first visit, in order to predict the loads for the protocol.

During the subsequent two visits, the participants performed the actual workout. They did six sets of ten reps, using seventy percent of their predicted one-rep-max. Prior to each of these workouts, they consumed either a Pycnogenol-based antioxidant supplement or a placebo made to look the same as the supplement. This was done in a random order for each participant to eliminate a possible training effect.

The results were clearly in favor of antioxidant use, but they were also a little confusing. The antioxidants allowed the participants to perform more work (i.e. more reps) at a greater velocity. As if that wasn’t enough to pique your interest, the benefit of more endurance and more speed extended across the entire workout. In other words, as you might expect, the placebo group experienced a waning in speed and power from the first set to the last, where the antioxidant group did not. 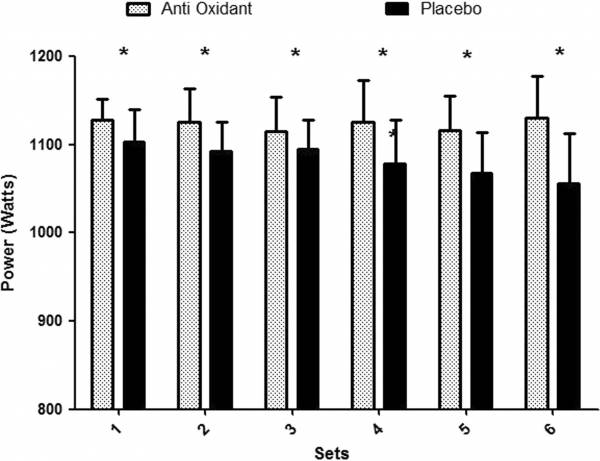 Based on these results, it’s obvious that antioxidants are good for size and strength even when used as a pre-workout supplement, since the participants took the supplement four hours before exercise. But the whys are still mysterious. Oxidative stress was measured by xanthine oxidase, which is a primary cause of damage from exercise. Xanthine oxidase was not lower in the antioxidant group, leaving the research team scratching their heads as to how the performance actually increased.

Not only that, but growth hormone release was also delayed and stunted by the antioxidant. This could be the result of differences in energy substrate utilization, and might indicate the possible cause of the performance boost.

1. James Ackerman, et. al., “The effect of an acute antioxidant supplementation compared with placebo on performance and hormonal response during a high volume resistance training session,” Journal of the International Society of Sports Nutrition 2014, 11:10