I remember being crushed in preschool when the boys wouldn’t let me play Ninja Turtles with them because I was a girl. I pointed out that April was a central character in the show and they reticently let me join them. Aside from that minor squabble, I always had a lot of guy friends growing up. It wasn’t that I didn’t like playing with girls – I loved sleepovers, painting my nails, going to the mall, and watching the latest chick flicks. But I always appreciated the company of guys, not only when the time came for dating, but also for hanging out as friends.

In high school I went to an all-girls school and quickly became disenchanted with the whole ‘girl power’ thing. I started to feel that this whole tendency of isolating ‘girl things’ from ‘guy things’ caused more problems than it solved. I disliked anything that reeked of a gender bias – including anything labeled as “Women Only” or “Men Only.” To my eyes this was nothing but blatant discrimination and sexism.

Since then things have changed a bit. Maybe part of it is the fact that I have two daughters now and spend a good majority of my time having tea parties and playing princesses (although they do slay their own dragons). It’s hard not to embrace girly things when I have a whole laundry pile devoted to pinks. Or maybe it’s just getting older and becoming more comfortable with my femininity, but more and more I am comfortable identifying myself as a woman. Although I realize gender can still be divisive, I’m much less allergic to woman stuff.

One of the areas in which this change is most obvious is the fact that I belong to and train clients at a women’s only gym. I always scoffed at the idea of ladies-only gyms, imagining rows of pink dumbbells and Jane Fonda attire. But I’ve noticed they have a few things to offer that a co-ed environment may not always provide:

Some women feel insecure about getting sweaty and smelly in front of guys. I’ve had clients tell me they feel less self-conscious in a women’s only setting because they don’t have to worry about their appearance. Some women may feel uncomfortable working out in front of men for religious or cultural reasons. Whatever the cause, it’s definitely the case that the less self-conscious you are during a workout, the more productive it will be.

2. You Can Embrace the Facts of Life

Everyone knows women have to deal with some unique biological concerns. A woman who is eight months pregnant might feel awkward sharing the squat rack with the bros. You don’t have to worry about asking the guy at the front counter if he can refill the tampon machine. Girl stuff is a non-issue because everyone else is probably dealing with it too. 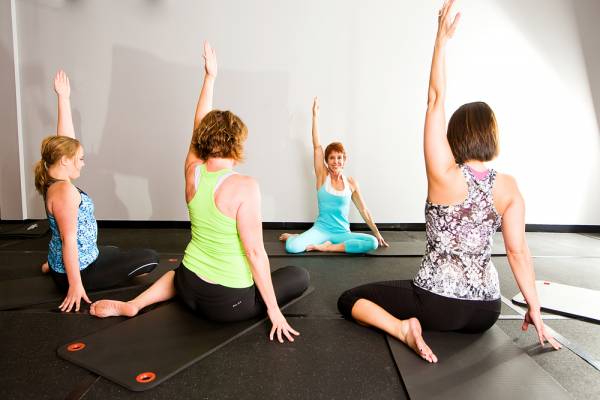 In an article a few weeks back, fellow Breaking Muscle writer Valerie Worthington cited a line from Gavin deBecker’s book, The Gift of Fear: “Men, at core, are afraid that women will laugh at them. And women, at core, are afraid that men will kill them.” This might seem dramatic and over the top, but over the years I’ve come to realize it’s true. As a doula, one of the things I learned during my certification was that a surprising number of women have deep-seated fear issues that often surface during labor and delivery – perhaps due to sexual assault, abuse, or even rape. This is the extreme end of the spectrum, of course. On a more general level, for many people the safety bubble is much smaller at a women’s-only gym, which may make them more comfortable and focused.

It is often noted in social commentary that one of the interesting side effects of the feminist movement is that women want to do everything men do. If a guy can do fifty pull ups, I can too. Strangely, in some cases a co-ed gym environment can breed a sort of gender face-off. While that’s not always a bad thing, it can be distracting. There’s something special about working out in a community of supportive and encouraging women – from hardcore athletes, to new moms, to older women who can still do push ups and run marathons. Of course this is largely dependent on the environment. I have yet to hear any derogatory comments about being ‘butch’ or other typical female gym stereotypes.

So is classifying things as ‘male’ or ‘female’ purely discriminatory? Is a gender specific environment simply a form of unjust segregation? I’m leaning towards no, at least not always. Annie Lennox once said, “I love to be individual, to step beyond gender.” It’s certainly true there’s more to a person than their gender, and it’s liberating to discover that about yourself. But can we also learn something about ourselves – and each other – by embracing our femininity and masculinity, beyond mere customs and conventions?

What do you think – are gender-specific gyms simply divisive and backward or could they have benefits? Feel free to share your thoughts below.