Many of us have encountered the “inverted U” graph (psychology students, but not economics ones, I suspect). As can be seen from the graph, there is an optimum level of arousal zone. This will be at the top of the “U,” give or take a standard deviation.

Too low and we won’t get the most out of ourselves (down at the left fork of the “U”). Too high and we start making mistakes (right fork). Like Goldilocks, we want something that is just right.

But it is not all as simple as “get mad and win!” That is why we have two functions showing. Different sports will have somewhat different graphs, although all will have that basic “U” shape. Why do they differ?

The general rule is the more complex the activity, the lower the required arousal level. By “complex” we can include the level of cognitive activity as well as the physical. Those in shooting sports have to keep their excitement in check since precision is everything.

This can be seen with the blue “U.” Simpler movements can tolerate higher arousal levels. Powerlifters and football linemen want very high levels since the strength levels are high and the movements not usually too precise. They can go all out and still be effective. (Red “U.”)

Those are the extremes. Other sports fall somewhere in between these two. Some will have higher or lower summits and they will also be narrower or wider at their bases. Olympic lifting will be skewed somewhat leftwards of the red “U” but not as far left as the blue “U,” since the technique needed will be easier if the lifter keeps his cool.

CrossFitters doing high rep Olympic lifts have a somewhat different scenario. The intensities must be lower so one may think that arousal will not be so important. And indeed it isn’t in the early reps.

But as the reps accumulate arousal needs to increase, because the actual perceived intensity rises with each rep. By the time the last rep is attempted it feels like a 100-percenter, so the CrossFit lifter must get as engaged as if he were in a regular Olympic meet.

Now, for those who prefer stories to graphs, I will relate what happened to one lifter I knew some years ago. I was asked to critique this athlete’s lifts just before she was to enter her first powerlifting meet.

Since she was making little progress she thought her technique must be at fault. She was quite inexperienced in lifting and had no serious coaching, as would become obvious. I asked her to show me each lift and then I would tell her what she needed. I will just relate her bench press for the purposes of this article.

She got down onto the bench and did a few warm-ups with just the bar. She soon was up to 120 lb, which she told me was only ten pounds away from her personal record (PR). The technique was okay for a beginner. She lowered the bar with little eccentric action and then pressed it all the way up but with hardly a breath.

She was quite satisfied coming so close to her PR and not feeling it. I told her that was her problem. She was puzzled since she thought that a near PR going up with no excitement was what one should aim for. I then told her to put 130 on. Well, that stopped her. She half-heartedly tried to press it out, all from a slack base.

I grabbed the bar and re-racked it for her, as she got very mad at herself for failing. She didn’t think she would ever set another PR. I let her go on a bit and then told her she would set it today. She responded that would be nice, but didn’t I just see her miserable attempt at 130?

I replied that if she tried to lift in the same way she would indeed miss it again. But I did not intend to have her lift it the same way. I told her about arousal levels and how they have to be high in the power lifts.

The first thing she had to do was get her hands on the bar, her body on the bench, and her feet on the ground and keep them there. The second thing she needed was to “charge” up her arousal level. To do that she had to breathe in a couple of times and then hold her chest with the Valsalva maneuver. Thirdly, she had to get mad at the bar. I asked her what could get her angry.

She said, “Not much, I’m quite laid back most of the time.” I could then see part of the problem. She was not used to raising her arousal level. I asked her again to try to think of something that would get her going. Finally, she said that someone saying she “does such-and-such like a girl,” meaning wimpy, that got her going. She took up lifting in order to change her self-image so “lifting like a girl” was a real insult to her.

Taking the bull by the horns, I told her to put 135 on and get on the bench. Then she could tighten up her contacts and I’d un-rack it for her. Just as I got it off the racks and she lowered it, I told her not to lift it like a girl – as she did on the 130. Well, it did a touch-and-go on her chest and up it went. New PR!

“Why did you say that when I already told you I didn’t like it?” She demanded. I just pointed to the bar, now back in the racks. “That’s why. You got so mad you lifted it much easier than your 120,” I answered. 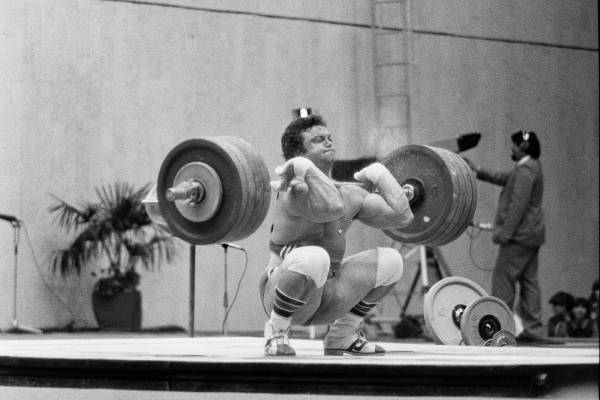 She came back to Earth and realized what had occurred. I told her she needed to get her arousal level up in order to get the most number of muscle fibers to fire together. Not only that, the pain of effort is not even noticed when fully aroused.

She had indeed noticed that. She was not accustomed to making limit efforts, in lifting or elsewhere, so she experienced that as pain and always held back. I told her the pain is really just the feel of hard work.

Get over that fear and the sky is the limit. So get on the platform and get mad at that bar!