By now, if you’re reading this, I hope you’ve read the Easy Endurance: Using the Magic 180 Rule article. If you haven’t please take a few minutes to go and have a look at it, because this week’s journal is filled with some thoughts on applying this in the real world of training.

Swimming presents all kinds of problems. For starters you are not weight bearing, which affects how high your heart rate can go. The highest you will ever see your heart rate is during an uphill run. The less weight we carry, the lower our possible heart rate becomes. So when we are lying down, not even forced to hold our own body weight, there is no way we can ever get our heart to work as hard.

This isn’t to say swimming should feel easy, but what may feel like a ridiculously high heart rate in the pool only feels that way because we are forced to use smaller muscle groups such as the shoulders, instead of the legs.

Given that swimming causes lower heart rates during a session, I had been operating under the impression that even if I pushed myself to near all out pace in the pool, when compared to running or riding it was really a moderate session. More research on heart rate training, however, has shown I was perhaps a bit misguided.

If you’re an MMA fan you’ll have seen the video of Wanderlei Silva doing a ridiculous circuit wearing a snorkel. What he was trying to do was this thing called hypoxic training. Sadly, they got it a little messed up. Hypoxic training on land isn’t about restricting breathing. Rather, it is about deliberately alternating periods of breathing low oxygen air and normal air. This simulates the effects of altitude training and allows for a host of adaptations to take place that boost performance. So breathing through a snorkel does absolutely nothing to help with this other than make you work harder to breathe (which may in itself have some other benefits as proper breathing is quite a powerful tool, but definitely missing the point here).

But, when you are face down in the water you are already forced to perform hypoxic work every single stroke. So I started looking at what I’ve been learning about – the lower heart rate work, the easy endurance ideas – and started putting together some of my own thoughts. 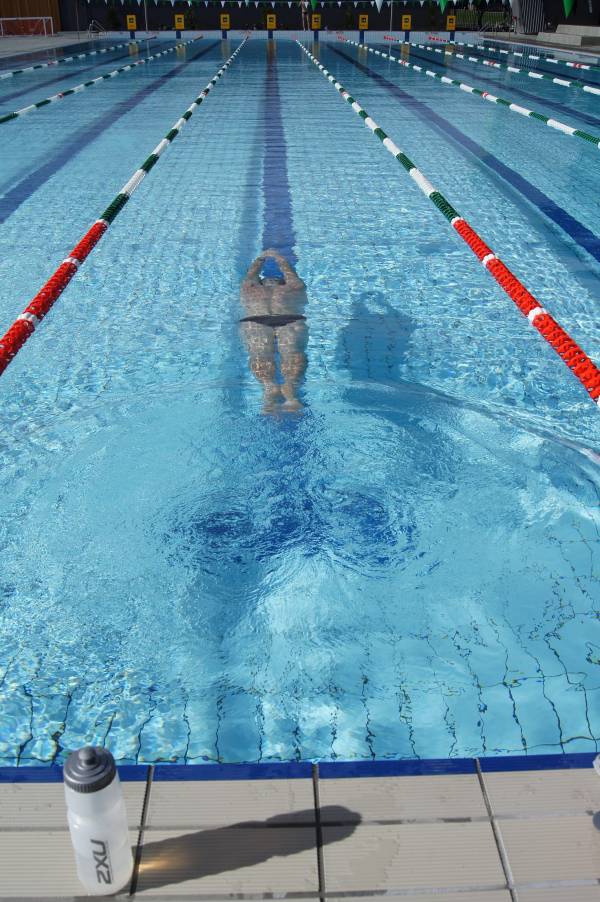 It’s pretty simple – I swim for more strokes before I breathe. Any aerobic sport is about one thing – oxygen. That’s what aerobic means, it means “with oxygen.” Normally I would breathe every two strokes to get as much oxygen into my system as possible, so I can swim as fast as possible as long as possible. Oxygen is my fuel.

But then my swim coach said something to me. (Well, two things, but I’m only going to talk about one here.) And that was that, “Everyone should always do hypoxic sets in their distance training.” My coach, John van Wisse, is a genius open water swimmer, one of the greatest in the world, so when he talks swimming I listen.

Do you know what happens when you breathe less? Apart from feeling like you’re going to die when you first begin using this method you’re forced to slow down. And just like the 180 Rule you struggle to reconcile this in your head and worry that when the time comes you won’t be able to go faster.

And then some pieces of the puzzle start falling into place.

I’ve literally read every training tip from every Hawaii winner over the last two decades. The single most common swimming tip is to learn to be efficient at swimming and breathe every three strokes. You know what breathing every three strokes forces you to do? It forces you to adopt a pace that is within your aerobic limits. It is a self-limiting way to swim and maintain your best pace for an ultra endurance swim.

And there’s that self-limiting idea Gray Cook speaks of with barefoot running. It’s self-limiting. If you run too hard, too far, or too fast your body will let you know through pain and you’ll be forced to slow down. Nasal breathing while running is another and I’ve found the pace I run at while breathing through my nose is exactly the same as my maximum aerobic function heart rate (MAF HR) should be. So barefoot running and nasal breathing is double self-limiting? A way to ensure running doesn’t hurt you?

The effects of hypoxic swimming are amazing. You are forced to slow down to a pace you can deal with aerobically. All of a sudden sets become about the performance of your aerobic system, not your arms. And just to show how everything is everything when to comes to training I’ve even been using Dan John’s Rule of Ten for my breathing patterns (Dan thinks that big exercises like the deadlift have a maximum of ten reps in a single session and can be done in various ways such as 2 x 5, 5 x 2, 3 x 3, 4-3-2-1 or 2-3-5). That 2-3-5 breathing pattern is magic. The 5s are hard – absolute lung busters – but they force you to slow down and work at the right pace for you, just like nasal breathing does for running. The combination of 2s and 3s, which can be done at threshold, and the 5s, which are at aerobic pace, is a great aerobic fartlek session in the pool.

I’ve already been playing with this for a few weeks and the results are great. How great? Well, I’ve got a 500m time trial to do in two days so the results will show then I hope. I’ll keep everyone posted in the next journal!