The 2013 CrossFit Open is complete and I met my goal of making 10th place. Today I discuss some of my biggest challenges for the Games and how I’m planning to work on them.

Well, the Open is over. I arrived at tenth place overall, which was my goal for the Open.

The lesson learned for the 2013 Open is that your goats are going to show up and you must work them. There were a couple of movements that I sort of hoped would not show up (toes-to-bar) but knew they would, and a couple I really hoped would show up (heavy cleans) and they did not. But all in all, my approach was to be prepared to say “whatever comes up is fine with me.”

I worked my goats fairly consistently all year and it paid off. Toes-to-bar were actually not the hard part of 13.4, wall balls were fairly decent through 13.3, and chest-to-bar pull ups were workable, although I still have some room for improvement there.

Here are the goats that haunted me last year, and what I did about them:

Because I am short, wall balls require a full jump-ball movement to reach the target. Plus, I always had a tendency to get about two or three good ones before that arc to the wall began to fall apart and the ball would start to spin, hit too low, not hit at all, you name it. As a result, wall balls killed me.

The fix: Thirty wall balls every day as a cash-out. Some days, just thirty unbroken to work on the ball path, other days, I would throw the ball as high as I possibly could, to start getting stronger in the throw. That way, once I had to throw to a ten-foot target, it was easy.

In addition, I purposely used the most lopsided ball in the box. That way I could get used to any path the ball might take and be ready to return it.

Result: In the workout I made it through 130 text book wall balls before I really started to fatigue.

I can’t say these have gotten easy but they have become more manageable. My issue here was two-fold: I was not getting my feet behind the vertical plane and I would fatigue at about eight reps. After a few sets I would end up in that ugly, slow monkey swing.

The fix: Work on them nearly every day. Often I would simply set up a nice easy ‘every minute on the minute’ and do five to eight reps. I would also recruit folks from around the box to watch my feet to make sure they were traveling behind the vertical plane. In addition, serious warming up and stretching makes a huge difference for me on this exercise. If I make sure my shoulders, pecs, and lats are really open, the movement gets easier because I am not pulling through tightness or discomfort.

Result: No problem. The toes-to-bar on 13.4 were never the issue. Just the lungs. 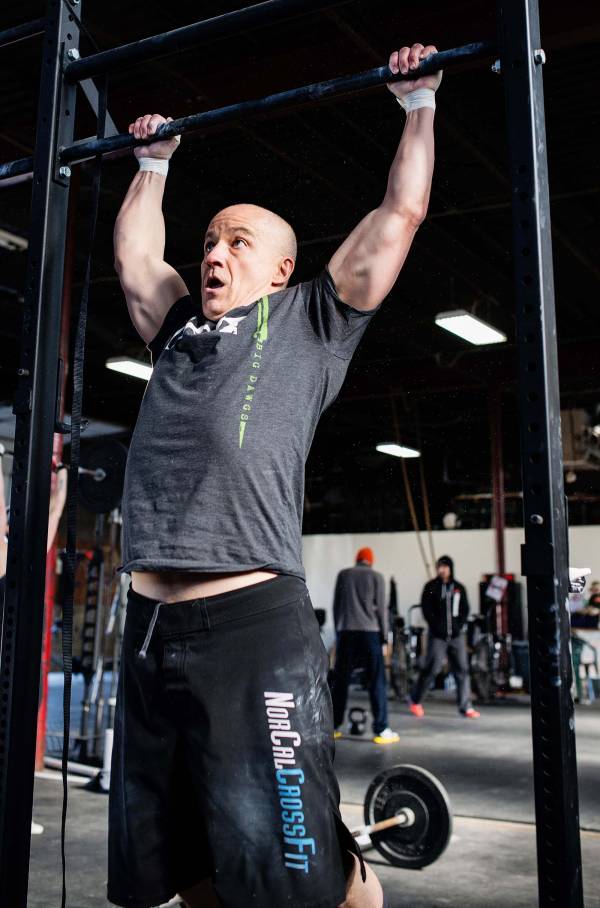 I wish I could say I was butterflying my way through 13.5 but that is not the case. I started working on the butterfly technique and thought I had it down but after my coach videotaped me doing it, it was very apparent that I was coming nowhere near full extension at the bottom. My tendency was to keep my arms flexed just enough to “hold on” to some of the tension rather than bottoming out. The problem is, those are no-reps.

The fix: Revert back to normal kipping chest-to-bar, and focus on full extension. I didn’t do a lot of extra work on these after my normal workouts because they came up enough during training to really focus on quality reps. This is still something I will work hard on prior to the Games so that all reps are good reps.

Result: I made it through eighty reps on 13.5 but clearly need to be able to string together larger sets of chest-to-bar pull-ups in the event they come up in the Games.

Goats to work on for Carson: Where do I start? Let’s just say if the masters have to do handstand walks, I am in big trouble.