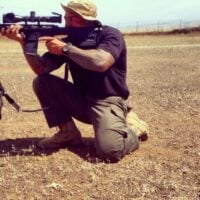 Freddy Camacho was born and raised in the East Bay Area of Northern California. A life-long commitment to fitness started at the age of thirteen when he joined the high school wrestling team. After high school, Freddy continued working out and played numerous recreational sports. Numerous fights while playing in a local hockey league led him back to training in the combative sports at the age of 33.

Freddy began training in Brazilian jiu jitsu, Danzan Ryu jujitsu, and Krav Maga, eventually becoming a Level II Krav Maga instructor. When he was 34, some fellow Krav Maga students suggested Freddy get into law enforcement. He was hired by South San Francisco Police Department and sworn in on March 1, 2001.

In 2005, Freddy and his trainers opened their own martial arts gym in Union City. In 2006, Freddy hung up the gloves and chanced upon CrossFit. He instantly fell in love with the challenging training style. He started one of the first 100 CrossFit affiliates, CrossFit One World. His CrossFit One World blog was one of the more popular CrossFit blogs, receiving over 3,000 page views a day. Freddy also worked for a year and a half on the CrossFit training staff. As a CrossFit athlete, Freddy appeared in the CrossFit Games five times. His last two appearances were as a 45-49 year old masters athlete in 2011 and 2012.

Currently, Freddy is a patrol sergeant with the Union City Police Department. Freddy is the assistant team leader on the SWAT Team, team leader for the Sniper Team, and runs the department’s defensive tactics program. Freddy and his fiancé, Chyna Cho, are co-owners of CrossFit of Fremont in Newark, California. Besides coaching and programming for their gym, both continue training hard to try and qualify for the CrossFit Games.