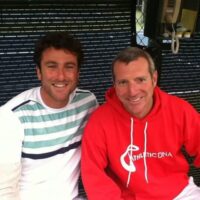 Paul Pisani is originally from upstate New York where he attended Binghamton University and Santa Barbara Junior College. His formative tennis and cycling years were spent in Santa Monica, California where he competed in collegiate tennis and Men's Open tournaments. Before his tennis career, he was a professional cyclist. He rode for the 7-Eleven National Cycling team and was a ten-time New York State Cycling Champion.

Paul began training tennis players and had instant success. He went on to train American tennis professionals on both the ATP and WTA tennis tours and worked with top U.S. collegiate schools. A few of his pupils include Justin Gimelstob, Amer Delic, Ashley Harkleroad, and Sam Querry. His coaching highlights include a Semifinals in the U.S. Open with American Robby Ginepri, and top ten National finishes with Pepperdine University and Oklahoma University. He now resides in Amelia Island, Florida where he trains and coaches clients at beautiful Amelia National Country Club.