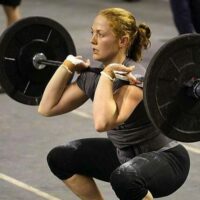 Ruth is a 28-year-old New Zealand representative CrossFit Athlete. She has represented the Australasia region at the World Reebok CrossFit Games in both 2011and 2012 (placing 31st in 2011 and 17th in 2012).

Ruth has always been an athlete. She competed successfully as a triathlete, long distance mountain runner, multisporter (coast to coast), and at netball and rugby. She found CrossFit in 2009 and has now competed in four regional events, placing 10th, 4th, and then qualifying for the worlds in 2nd place for the last two regionals.

Ruth competes for New Zeland as an Olympic Weightlifter. In 2012 she competed at the Oceania and Trans Tasman Champs. She is also a successful co-owner and coach atCrossFit Invercargilland works as a Locum small animal veterinarian when she has time.

Currently she is training towards being Australia’s best female CrossFit athlete and to qualify as an Olympic weightlifter for the next Commonwealth games. She trains in Los Angeles under the instruction ofDusty Hylandfor parts of the year. The rest of the time she trains at CrossFit Invercargill and is coached by Jules Dempsey at the Southland Olympic Weightlifting Club. For more about Ruth visit her website.