You vs. the Industry

Let’s look in one corner and see ourselves clearly for a moment. Mostly we’re bigger than elite runners. (This is important, but I’ll come back to it more later.) Not only are we bigger but we don’t have the years of skill building in running that they do. In other words, we don’t run anywhere nearly as well. This means that we hit the ground differently and our shock-absorbing mechanisms aren’t as well trained as those belonging to great runners. So, our shoes needs are going to be very different to those of these rare individuals. Just the same as what Usain Bolt needs for training isn’t what you need, there’s just as big a chance that what elite runners need from shoes is entirely different than what you need.

In the other corner are the manufacturers of various brands of running shoes who will tell you anything they think you want to hear as long as it leads to increased profits for them. As with all things in the fitness industry, running shoes are incredibly trend based. From one extreme with rubber springs in them to barefoot replica shoes like FiveFingers, shoes are all designed with one thing in mind – to make the manufacturer money. Sometimes companies do that by simply changing colors from season to season and other times they go in a completely different direction such as when Nike brought out Frees. But it’s all for one thing – money – and keeping this in the front of your mind when selecting shoes is important.

What You Actually Need

The first thing that needs to be understood is that everyone is built differently. That means that despite your friend who took up running swearing by a particular pair of shoes that doesn’t mean they’ll be right for you. From foot widths to body weight there are a myriad of elements that need to be taken into account when picking the right shoes.

The second thing to keep in mind is that despite what the manufacturers will tell you, barefoot type shoes, zero drop shoes, and other minimal type running shoes are likely not right for you. If you’ve spent your entire life shod in well-cushioned running shoes, don’t run much, and are even a little bit beyond the 70kg/155lb mark, there is a fair chance you need some rubber between you and road. (And 70kg would still be considered heavy for a good runner.)

The physics of running is simple. A single step can load as much as three times your bodyweight onto the support mechanisms of the foot – the plantar fascia and calf. At 70kg/155lb that equates to roughly 200kg/440lbs of force that needs to be dealt with every single step. Every 5kg/11lb added to your frame increases those forces by 15kg/33lbs.

While that may not sound like much let’s break it down further, as those numbers only relate to a single step. At typical speed the average runner takes between 1,200 and 1,500 steps per km. (You’ll have to excuse me here as I mostly only work in metric, so these next numbers will all be in kgs and kms). So a 70kg runner has to deal with 1,417,500kg of force on a 5km run. (210kg per step x 1350 steps per km x 5km). While an 80kg runner has to deal with 1,620,000kg over the same distance. That’s an increase in force of over 200,000kg that needs to be dealt with. Don’t you think the heavier runner may need different shock absorbers than the lighter runner in the same way a Volkswagen Beetle has different needs than a dump truck? So, isn’t it likely that shoe needs will be different too?

The Transition to Minimalism

Before anyone thinks I’m anti-minimal shoes, I need to explain that I’m not. Just like I’m not anti-CrossFit or anti-Olympic lifting. What I am against is people doing things their bodies aren’t prepared for and getting hurt. So while our end goal is to actually end up either completely barefoot, or close to it, we need some steps along the way.

Here are two different examples of what actually happens when people start running some decent distances when they’re not used to it: 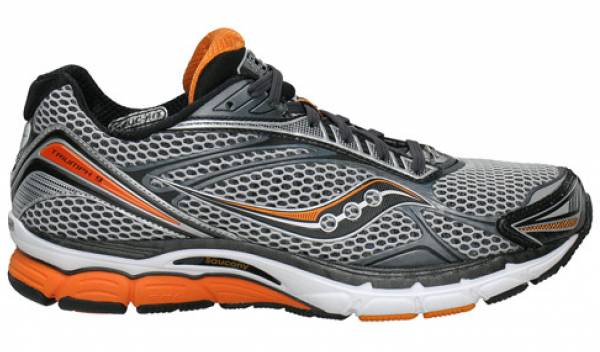 During my build up for Ironman last year I had a variety of calf problems. They eventually subsided and then I suddenly had Achilles problems. These problems have continued now for about seven months. I was running in Saucony Kinvaras. These shoes have a 4mm drop – for people who don’t know, that is fairly flat still and these shoes are used by many fast Ironman athletes (who all weigh about 10kg less than me). Over the last few months I have made two big changes in my shoe choices. I swapped from Kinvaras to Triumphs (pictured above). The Triumphs have a bit more padding in both the forefoot and the heel. To be honest, I don’t like running in them as much. They just feel thick and heavy.

I’ve also stopped wearing New Balance Minimus shoes at work. These are a completely flat “barefoot” shoe that I really like. The problem is that with my lower legs already worked over from running, they don’t need to be put on stretch while I’m just standing around coaching. So I started wearing Reebok Nanos (which I love). They have a 4mm drop and that seems a good number for my Achilles to actually get a rest while I’m working. Flat, but not so flat they continue stressing that part of me.

The result of this in just six weeks has been the near cessation of pain after six months of no progress. So even though I don’t like my new running shoes as much I will keep wearing them if it means I can be pain free.

When my girlfriend upped her running for a half Ironman she started to have some problems familiar too all runners. Her IT band started acting up, making her knee sore. Seven days before, we had gone to one of those stores that offer “gait analysis” and they recommended Asics Nimbus over her usual Kayanos. It was the same brand, but a different model. In the course of three runs she went from pain free to painful and we knew it was the shoes. Luckily the store has a return policy and when she went back and swapped them for the same shoes she normally runs in she was pain free again after a single run. 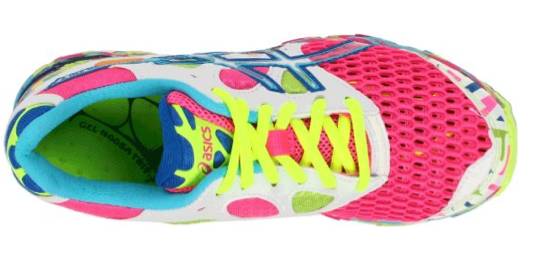 Then, she started to get similar issues to me – Achilles pain. However, her issue is different as she has a slight bone spur on one heel. You may not be aware of this but shoes usually have a solid plastic cup that your heel rests in. Her normal shoes and her Minimus work shoes rub this because of the way they are made. She switched again to another shoe – the Noosa Tri – and wears only these now, even when at work. The result – no pain in three weeks after six months of seemingly never-ending problems.

What I find most interesting in both cases is that we both quit wearing minimal shoes in our daily lives. When you consider how many hours I run per week versus not running you’d be hard pushed to not recognize the link between your day shoes and pain-free running.

My ultimate aim is to end up as near barefoot as possible. But in the mean time I will make sure to stay pain free, which will allow me to build up my crucial skills at running. That will allow me to gradually shift to more minimal shoes. But I’m in no hurry as this process may take me years. Take the time to find the right shoes for you. This may take a while and it likely won’t be cheap, but the pain-free result will be worth it.