What I’ve come to discover is an entirely new dimension of training, with profound value for those who pursue and coach performance.

“Movement training” is a becoming popular buzz phrase within the fitness industry, especially as an increasing number of “average” people are becoming aware of the link between exercise and health. As a classically trained strength coach and former Division I athlete, I understand the effectiveness of traditional performance training and its direct link to physical health and well being.

But I’ve also always felt that something is missing from our current model of performance. In my quest to help both myself and my students experience how empowering a high state of performance can feel, I’ve experimented with endless angles and styles of training. What I’ve come to discover recently is an entirely new dimension of training, with profound value for those who pursue and coach performance.

The principles of natural movement support a comprehensive approach to fitness.

The Rise of the Current Fitness Model

First let’s rewind back to 2008, when the current model of performance began penetrating the mass fitness market. I remember lying on a grass football field watching Pavel Tsatsouline lecture about performance training as part of his iconic RKC (now StrongFirst) kettlebell certification.

“GPP, general physical preparedness, should always come before SPP, specific physical preparedness,” he explained with a thick Russian accent. He labeled strength the “master quality,” and his training protocols clearly nurtured the development of this quality. In an industry dominated by gimmicks, machines, and muscle isolation, Tsatsouline’s words were incredibly refreshing.

Concurrently, Greg Glassman was popularizing his famous definition of GPP, with a broader scope to include “work capacity across broad time and modal domains.” With a performance model similar to that of high-level athletes, coaches and fitness enthusiasts alike were training in a way that distinguished them from bodybuilding and calorie counting dogma, methods which had pervaded the industry for decades.

Both Tsatsouline’s and Glassman’s approaches were correct in their own way. But now, decades later, it’s time we as coaches re-evaluate the current performance model, as emerging evidence points to its lack of completeness. 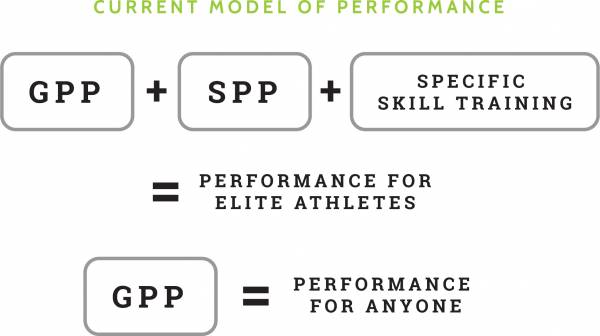 Depending on the specific brand of training you choose, the current model often begins with refining a student’s movement patterns. The initial goal is to correct dysfunctional patterns of mobility and stability and restore baseline function. Because the eventual goal of GPP is measurable work capacity improvement – i.e., strength, power, agility, endurance, etc – the movement patterns coaches gravitate toward are those patterns that best display work capacity.

Hence the high emphasis on “functional” patterns that are also well-suited for quantifiable work capacity development, such as squatting, deadlifting, pressing, pulling, running, and their variations. “Mobility drills” are often included to allow the student the benefit of executing these patterns with a fuller range of motion, avoid patterns of compensation, and to avoid injury and discomfort related to stiffness.

Those who train for a specific sport spend additional time refining skill and developing work capacity specific to the patterns most relevant to their particular sport. This is the case even if the sport is as relatively straightforward as weightlifting, It’s a clean, effective model that certainly has stood the test of time. So, what’s missing?

To answer that question, we need to visit a different branch of science.

In the early 1950s, a French developmental psychologist named Jean Piaget published his work on the link between movement, external environmental challenges, and cognitive ability in children. His work was inspired by watching his own kids interact with natural environments, which he contrasted with the sterilized laboratory settings found in most research studies.

Piaget discovered that sensory-rich environments stimulate the brain’s ability to perceive and produce adaptive movements. This neurological problem solving process is called perceptual motor behavior, and it is essential to a child’s overall ability to learn and develop properly. His work would become a powerful theory of cognitive development, which acknowledges the extensive neural interconnectedness of the brain, and is still referenced extensively in modern child development research and occupational therapy.

The driving force of perceptual motor development (PMD) is motor learning in response to environmental demands, which is a step beyond learning new movement patterns in isolation. For example, balancing on a new surface requires far more sensory integration and adaptive movement, and thus perceptual motor skill, than deadlifting a heavier load. Complex, highly practical and functional movement drills, such as crawling, become perceptual motor drills when unfamiliar obstacles or other environmental complexities are gradually introduced. Any external challenges that demand complex, adaptive movement patterns stimulate the brain to refine and build its neural pathways, increasing its ability to adapt via this neuroplasticity. 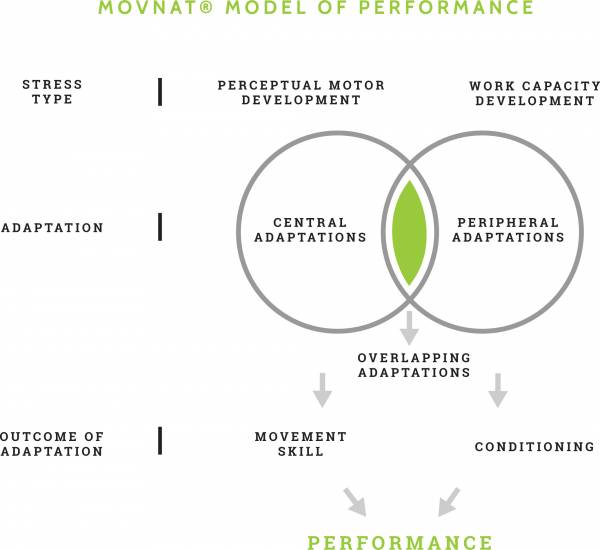 Responding to environmental demands will retrain your neural pathways.

This leads to robust health. Modern evidence supporting the benefits of this type of training for all ages is flooding in, both in clinical and non-clinical applications. Potential benefits include:

Further, the brain’s ability to perceive both its internal and external environment is subject to the same “use it or lose it” principles that govern work capacity. Lack of use, whether through over-specialization or lack of movement, can have detrimental effects for both the athlete and average person. In contrast, this general perceptual motor skill manifests itself as general adaptability, and it’s the hallmark quality of a person who trains and develops perceptual motor skills.

With this new understanding of the complete spectrum of human abilities, we can lay the foundation for a new and improved model of performance training: 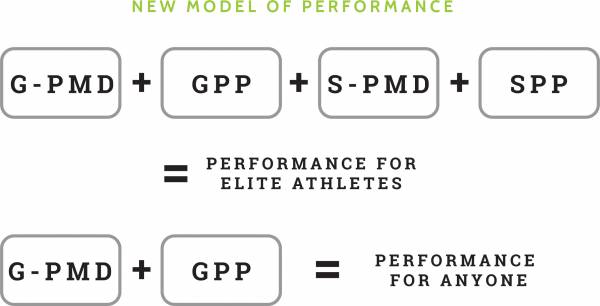 Force the body to increase performance through work capacity or movement capacity.

MovNat’s model of performance represents a sophisticated understanding of how the body responds to different types of stress. We can then create more effective movement and training programs.

By emphasizing movement sequences that demand PMD, the body is stimulated to make adaptations predominantly in the central domains, including it’s sensory-perceptual, coordinative, and processing systems.

By emphasizing movement sequences that demand work capacity, the body is stimulated to make adaptations predominantly in its peripheral domains, including the musculoskeletal and cardiorespiratory systems. Even though peripheral adaptations are regulated by the brain, studies have shown that synaptogenesis (the formation of new synapses between neurons) doesn’t occur without exercise that requires motor learning.

The overlapping adaptations in the diagram happen in the body during both forms of training. This means the adaptations that PMD stimulates aren’t exclusively central, while the adaptations that work capacity stimulates aren’t exclusively peripheral. In the body there is always overlap, so making a concrete distinction would be overly simplified. For example, crawling through obstacles will primarily lead to central (brain) adaptations, but there are muscular and cardiorespiratory benefits as well. No type of training style is exclusive to any one physiological system.

The outcome of these adaptations is the tangible increase in performance for our students that can be directly observed, either by increased movement skill or work capacity.

For the purposes of modeling, I have separated work capacity from perceptual motor skill development in the diagrams, but I am by no means implying that these training styles need to be mutually exclusive. When most people use the buzzword “movement training,” they are usually referring to a small fragment of PMD: the increases in proprioception and coordinative ability that follow refining movement patterns with little environmental enrichment. A solid training program incorporates a more comprehensive version of PMD right alongside GPP, developing movement performance synergistically and organically.

Combining these two forms of training for optimal performance is exactly what my work entails, as I am in charge of developing specific, science-based “Performance for Everyone” programs for MovNat, a Natural Movement education system. In my next article, I’ll be discussing how to implement both GPP and G-PMD into a successful training program. Until next time.

This article was originally published on Breaking Muscle US.