In recent years, some quite advanced sports science has become affordable for the amateur enthusiast. One recent trend I have noticed is the growth of blood lactate tests.

Blood lactate tests have been around for a while and can be a useful indicator of what is happening in some parts of your energy systems as you exercise – if you know what to look for and how to apply it.

Understanding how lactate works in the body can help improve performance.

First of all let’s quickly review what lactate actually is and where it comes from. Your body engages a number of different energy pathways. The supply of energy from these pathways depends upon the rate of energy demanded and how long the activity takes place. The pathways are able to produce energy at different rates and have different fuel requirements.

“Lactic acid is always produced in some quantity, along with another intermediate by-product called pyruvate, in the long sequence of reactions that take place in the breakdown of glucose during exercise.”

At first, a short-term energy system is used, called the phosphate system. It uses phospho-creatine stored the muscles and can supply energy immediately. However, its capacity is quite small. Longer duration activities demand energy from the breakdown of fats, carbohydrates, and proteins in the body.

Blood lactate tests work by measuring the amount of lactic acid present in the blood. Lactic acid is always produced in some quantity, along with another intermediate by-product called pyruvate, in the long sequence of reactions that take place in the breakdown of glucose during exercise. At moderate intensities, lactic acid usually breaks down and re-enters the energy pathways to release energy in the presence of oxygen. 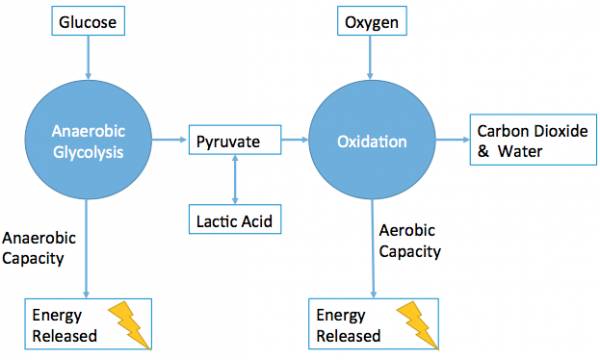 How lactic acid is released during moderate activity.

As the demand for energy increases, your body starts to switch its energy production to use more glycogen for fuel, as it is a faster process. Consequently, the amount of lactic acid (and pyruvate) produced rises and your breathing becomes more rapid to supply more oxygen to oxidize the pyruvate.

Eventually, the amount of oxygen you can supply plateaus and can no longer keep up with the demand. At this point, the lactic acid starts to accumulate, and if the intensity of the activity increases further, will continue to rise. The accumulation of lactic acid is usually accompanied by a burning feeling as the concentration of acid ions rises. The acid may also impede the energy production reactions so you are unable to increase intensity any further.

So, the total amount of energy you can produce depends on the capacity of the initial reactions that take place both without and with oxygen. These are called your anaerobic and aerobic capacities, respectively.

What the Numbers Mean

If the concentration of lactic acid is plotted against exercise intensity you get a chart looking like this: 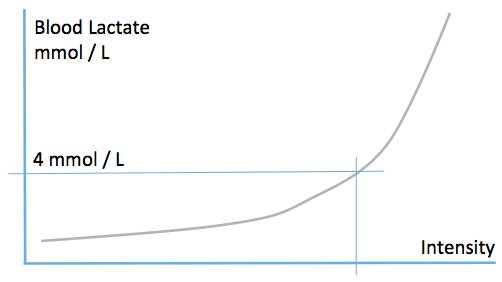 As we all share some similar physiological characteristics, most people find that the chart starts to rise at a similar concentration of lactic acid. This is usually at a concentration of about 4mmol per liter. This takes place at different levels of intensity depending upon the individual and is related to the share of energy production between the two pathways.

If you have a blood lactate exercise test, you will be asked to work at increasing levels of intensity while small blood samples or swabs are taken for measurement. A chart similar to the one above will be plotted. 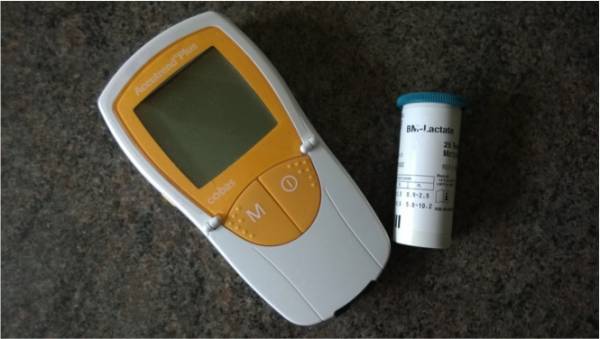 Sometimes this level of 4mmol per liter is used to estimate a performance threshold and then derive training zones. But if you only require some approximate zones for heart rate or power, there are other less invasive ways of doing this, such as a maximum heart rate or threshold power test.

Like any test, the blood lactate exercise test only gives results on that day and if you wanted to compare your results from your training program over successive months, further tests will need to be arranged. However, if you have gone as far as you can with your current program and need additional data so you can target your training to get that extra percentage in performance, then this test may be useful.

For the lactate test to be useful, first address these issues:

This is all best explained by way of an example. A given rider knows that on a flat course he can sustain 250 watts for thirty minutes at maximum effort. During a lactate blood test the results were plotted like this: 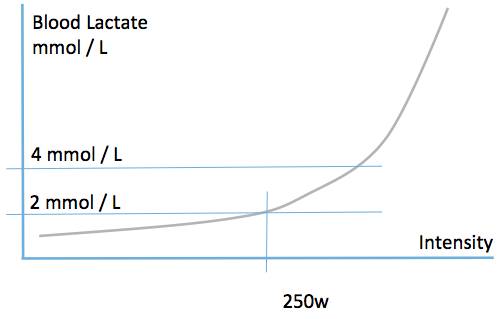 The rider in this example experiences a sharp rise in blood lactate at a higher intensity than his maximal effort. At maximum effort, the rider is producing low levels of lactic acid, which means he is highly effective at oxidizing the pyruvate needed for long-distance work. Conversely, he may not be so good at buffering or converting lactic acid required for anaerobic work in shorter-term road race breaks and sprints or relatively short hill climbs.

Should the rider wish to develop his performance on shorter-term maximum efforts then a training program might involve sequences of one- to two-minute intense intervals. After a period of time, a retest could show an adaptation to higher levels of lactate production such as the picture below. The lactate curve has shifted to the left, while maintaining the thirty-minute performance. 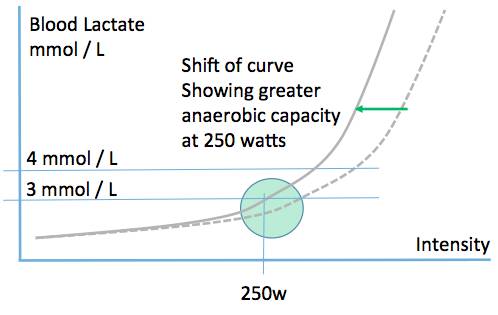 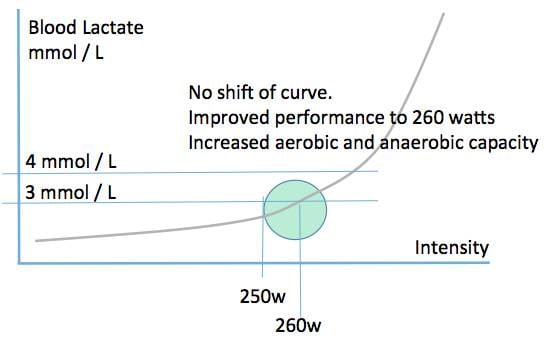 Pros of a blood lactate test:

Cons of a blood lactate test:

Photo 1 by By Yftaheco, via Wikimedia Commons.