I’ve been intrigued by the concept of “Bulletproof” coffee, but as a vegan I don’t eat butter. So, I decided to try it with coconut oil instead and see what benefits I gained.

Last year, the gym was abuzz with praise for Bulletproof coffee, a component of the Bulletproof Diet developed by Dave Asprey. The taste, the texture, and the performance-enhancing qualities of the coffee were shouted from the rooftops, and though Bulletproof coffee is traditionally made by blending two tablespoons of unsalted, grass-fed butter into high-quality coffee, I was certainly intrigued.

Asprey claims: ”It can promote brain function, memory, and energy levels. It can serve as a massive source of antioxidants and is associated with all sorts of positive health outcomes … you never feel hungry, get low energy …”

I decide to check out The Bulletproof Excecutive site. I quietly sneak around in sites like these because though I’m interested in the content and gaining insight relative to my own life and diet, as a vegan I definitely get the message I’m an outsider or that because of my choice, I’m on the “wrong path.” But no mind, I’m used to that. I simply wanted to research for myself, especially when people I trust and like are raving about the particular benefits of Bulletproof coffee.

The Bulletproof site is also very testosterone infused, to put it mildly, which is another reason I skulk around. It makes me wonder if the health benefits they tout are actually meant for me. But just when I feel turned off by some of the ways Asprey gets his message across, I find nuggets that resonate highly with me. His definition of “bulletproof” is this: “A state of higher performance, resilience, and health. A state where your body, mind, and life are protected from illness, fatigue, stress, and inflammation.” Please, who doesn’t want that no matter who you are or what your personal plan is to get there?

The thing that made me most interested about Bulletproof coffee in particular was Asprey’s explanation of how he came about it. While climbing Mt. Kailash in Tibet, he was given yak-butter tea and was immediately rejuvenated. My mother has been on many expeditions hiking the base camps of the Himalayas and she said the same thing when she was fed this tea by Sherpa guides. It’s no mystery to most indigenous cultures or even families of lower-economic means that fat will sustain your energy. My Irish grandfather was raised with four brothers in the brutal winters of Saskatchewan in a poor household and they sustained on lard sandwiches. When he used to tell me those stories, I cringed, but now it makes sense, especially when there was so little else.

When I heard that some partakers of the Bulletproof coffee where using half butter and half coconut oil, I knew I had to give it a try using all coconut oil. I brewed 20oz of my favorite coffee, Trader Joe’s Ethiopian, which is fair trade, organic, and shade grown, and then blended in two tablespoons of raw, organic coconut oil. Just like with anything, high-quality ingredients will give quality results. Crap in, crap out is certainly a motto I live by. 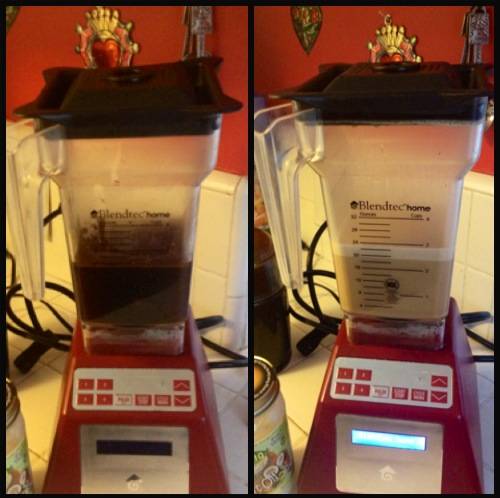 When I turned on the blender, the black coffee turned to a rich, caramel color immediately. I had heard about the magic that happens after blending the fat into coffee – that it becomes instantly creamy. And it was true. I will say that for a beginner, two tablespoons of oil was rather aggressive. I liked the taste for about a quarter cup, and then I had to sprint to the toilet. The coffee went through me liked greased lightening. If you are just starting out, lower doses are recommended, about one tablespoon. I imagine this is true if you are adding butter, too.

I didn’t try the coconut-oil Bullletproof coffee again for a couple weeks. I was scared away by that first experience. But the second time, I added far less oil – one tablespoon – and it still blended beautifully. I’ve experimented with a couple sweeteners since. I tried liquid stevia, which seems to be the Bulletproof coffee sweetener of choice, but as much as I try to like the taste of stevia, I just don’t. I have added raw agave and raw coconut nectar, too, and since this is not ideal to the original, fat-burning intent of Bulletproof coffee, I recently switched to sweetening my coffee with Xylitol. Wow is it good. It tastes like heaven in a cup.

I’ve been drinking one cup of BP coffee every morning for a couple months now. I still only add about one tablespoon of coconut oil, no more. What I notice most is that I am very satiated in the morning without “coffee jitters.” I coach morning classes on Tuesday and Thursday, which start too early for me to eat breakfast, but end about 10:00am. The running joke at the gym was that after my last class, I’d run upstairs yelling “I’m starving!” I have not yelled that since I started drinking a cup of Bulletproof coffee before my first class.

I cannot definitely say that I’ve experienced spikes cognitively or performance-wise because of Bulletproof coffee. I haven’t had any notable loss of fat either. The way I approach my health as a whole contributes to all of that anyway – it’s never just one component. I can say that, though, that the drink is definitely satisfying and gives me an even amount of energy in the morning. Mostly, I really enjoy the taste of all coconut-oil coffee and I intend to stick with it.