Along with other amazing female black belts I run the Women’s Grappling Camp. It’s about bringing jiu jitsu to women, bringing women together, and all of creating something much bigger than ourselves.

I’ve written about Women’s Grappling Camp before. It is a labor of love for me and my business partners Emily Kwok and Lola Newsom. Each time we run a camp, we make an arrangement with a grappling academy (past locales have included Toronto, the Los Angeles area, Minneapolis, San Antonio, and San Luis Obispo, California) and set up either a weekend or a week of grappling technique, discussions, and shenanigans for women who do jiu jitsu and crave validation that they’re not crazy because of it. (Or, that if they are crazy, it’s the good kind.)

Each time we prepare for camp, we get really agitated that things will go poorly or chaos will ensue, and each time we are pleasantly surprised beyond our wildest imaginings. The stated goal of camp is to bring together women who train Brazilian jiu jitsu so they can learn with and from other women who train, given that grappling is still a fairly male-dominated sport. The actual outcome is far more synergistic, though. There is catharsis, teambuilding, body part humor, personal growth, and all the other things women love and men could probably benefit from (at least a little). Campers make friends, train jiu jitsu, learn something about how to own their training and be a positive influence in their home academies, and, we hope, engage in what we refer to as self-actualizing (becoming the best version of themselves they can be).

I know, maybe it sounds a little pompous. But it’s really not hyperbole. We find that every time we have camp, the activities we plan and the changes we make on the fly to accommodate unexpected preferences, plus the amazing energy of the participants results in a memorable experience. Every single time. This is what the surveys we administer tell us, this is what the campers themselves tell us, and this is why we do it. To have someone tell me an environment I had a large role in creating has in some small way changed their life for the better inspires me in a way very few other things do.

Now that I have buried the lead, we just held the most recent Women’s Grappling Camp over Veteran’s Day weekend at Fifty/50 BJJ. The lead-burying part is related to the following: For this camp, we were fortunate enough to host as featured guest instructors Hannette Staack (for the second time) and Michelle Nicolini. Hannette holds eight world grappling titles and Michelle holds five, which means they are among the most decorated grapplers in the world, male or female. They are also absolutely delightful people – kind, warm, funny, and mischievous – in addition to being highly accomplished BJJ practitioners, competitors, and teachers. They were willing to share both their technical knowledge and their wisdom about what it takes for people to survive and thrive in the grappling world, male and female alike. 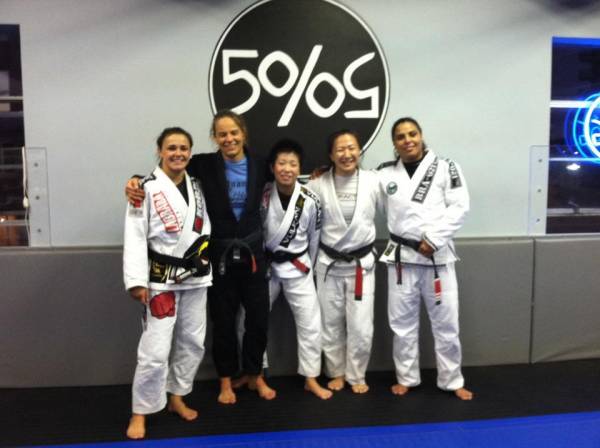 As an extra-added bonus, we also had in attendance black belt Sayaka Shioda, who is herself a 2007 ADCC champion (the Abu Dhabi Combat Club tournament is a very high-profile, highly respected event in the grappling world), and a black belt in sambo and judo as well. As far as we know, it was the first time there were female black belts from Brazil (Michelle and Hannette), Canada (Emily), Japan (Sayaka), and the United States (me) working together in any capacity. So we’re feeling pretty stoked.

I’ve thought a lot about why camp is amazeballs, as one repeat offender describes it. I was trying to drill down on why people who attend tell their friends, develop strong feelings about it, and come back for more. I think the things I’ve divined have potential relevance for coaches and athletes alike in other athletic pursuits as well. See if you agree:

We stress care and feeding of the whole person, not just the grapply parts. There is no doubt that the guest instructors we were able to host this time around possess world-class grappling skill, competition acumen, and teaching ability. That goes without saying (though I just said it). But what makes them and the experience of learning from them truly extraordinary is the fact that they were willing to share their personal stories and their vulnerabilities related to grappling. And this willingness reassured the rest of us that we are not alone in experiencing doubt, fear, and blows to self-confidence sometimes.

We focus on collaboration and support, even in a competitive sport. Obviously there is a time and a place for competition training and mindset, and we are discussing how to support that focus through future camps. But the lasting message we hope we convey is that competition is not mutually exclusive with community, integrity, and respect; rather, they are part and parcel of one another.

We learn and train hard. (Yes, I said we learn hard.) We give campers a lot of time to process their experiences, because as we say, people bring themselves to camp – stresses, fears, and current life problems. These don’t go away just because campers are out of town. Indeed, they can become more pronounced in such contexts. But we never lose sight of the fact we are running jiu jitsu camps and the reason we train jiu jitsu is because we want to train jiu jitsu. In other words, the processing is a complement to the butt-kicking. 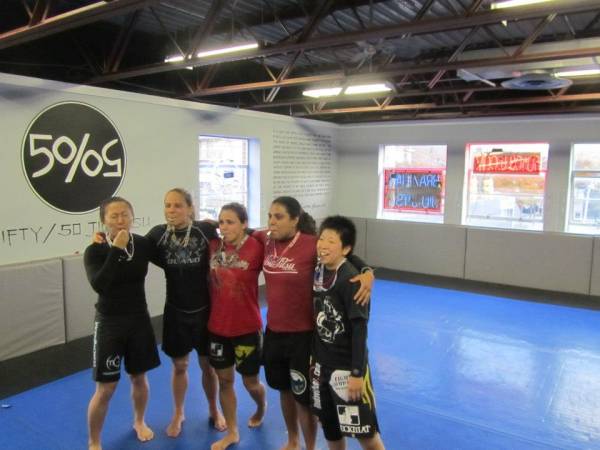 We do our best to make sure everyone gets what they need from camp, but we recognize this will be different for everyone. Having run many camps, we have learned that the benefit attendees derive is going to depend on the individual. Maybe for one camper it’s a set of details on specific techniques. Or for another maybe it’s validation that she is not alone in experiencing certain challenges. The point is, our perception of the purpose or goal of camp is only partially relevant to individual campers. What matters is that each camper feels fulfilled; what is less important is the specific reason.

We depart camp more confident that we can be a force for good in the world. Empowerment is such a loaded word. Some people think it’s psychobabble. Others think it’s code for “I do what I want with no regard for others.” We think it’s neither of those things. Rather, we think it has to do with personal responsibility, recognition that we have choices, and willingness to own the consequences – positive or negative – of those choices. Whether it’s deciding not to tap out of pride or reaching out to someone who is struggling with a confidence issue, we are always making decisions about how to act, and we can (or should) make the connection in our minds between those decisions and the quality of our own lives and experiences.

Camp is intense. As I’m writing this, it’s the day after the last day, and I am both physically and psychically exhausted. I’m missing the campers. I’m missing Emily, Lola, Hannette, Michelle, and Sayaka. I know that once I have had a little more sleep (and a little more coffee), I’ll feel confident this exhaustion means we once again did a good thing, for numerous people, using as the mechanism the martial art we all love.

Does any of what I’ve written here resonate with you, as a coach or as an athlete? Post your reactions to comments.