The classic ectomorph is the ultimate underdog in the iron world. As the old comic book story goes, the skinny kid gets sand kicked in his face, and then orders the Charles Atlas program and returns bigger, stronger, and gets the girl in the end.

That was the scrawny to brawny strategy in the 1950s, but as time has passed, the basic rules of bodybuilding have evolved, and come full circle a few times. The term “skinny” became “hardgainer,” and then “ectomorph.” They all mean the same thing—a skinny frame, and difficulty growing muscle and increasing strength.

Along with this so-called curse come a number of myths centered around what the perpetually skinny should do to gain size. Long-held beliefs that have been repeated until taken as truth have sold a lot of magazines. Some of those myths have also functioned as an excuse for those who struggle, letting them off the hook so they feel less inferior.

But some of the perceived disadvantages of the ectomorph can be turned into powerful weapons of progress. Below are a few common myths you may have adopted as doctrine. As you will see, many of these attributes can be used to your advantage.

The old belief is to train less often than the average lifter. The thought process was that you wanted to be careful of overtraining and outstripping your ability to recover. Ectomorphs were thought of as fragile and breakable, so infrequent training was prescribed to allow for ample rest and growth.

The Reality: But the fact that an ectomorph has a high metabolism is a good thing. This means you have a higher protein turnover rate, more protein synthesis, and superior recovery ability. The real key is to support this higher metabolism with proper nutrition, so you can grow at a faster rate. You’ll also grow lean muscle, instead of putting on more body fat than desired.

Myth #2: You Must Always Lift Heavy

The Reality: The key to muscle growth and increases in strength is to provide more load onto the muscle than it is used to, so it can respond by growing larger and getting stronger. Muscle failure is the goal. Yes, train heavy, but that is relative. More focus should be on achieving failure. Use a mix of rep ranges to expose your muscles to a variety of stimuli.

This one was paired with the idea of always lifting heavy. The belief was that you needed large amounts of rest between sets (five or more minutes!) in order to fully recover. That way, you could give each set maximum effort

The Reality: The goal of building muscle calls for fatiguing and stimulating as many muscle fibers as possible. Hypertrophy is best achieved with short to moderate rest periods of around one to two minutes. Yes, you will build some muscle with longer rest periods, but you want to optimize and prioritize your time in the gym.

Myth #4: Only Use the Big Lifts

Ectomorphs were told to only use the big, compound lifts. Squats, presses, deadlifts, and the like were the only weapons of choice. Don’t bother with isolation exercises, as they provide little to no value to the hardgainer.

The Reality: If you stick with only the big lifts for low reps, you are a powerlifter. Since your goal is to get bigger, powerlifting isn’t the right tool for you. The fact is that some isolation lifts are of great value. Be sure to include barbell curls, lying triceps extensions, calf raises, front raises, and posterior deltoid lateral raises, just to name an important few.

This one comes from the fragility mindset; that all ectomorphs are somehow little delicate flowers, constantly in danger of breaking. Training to failure, we were told, would send you into a downward spiral of overtraining and burnout.

The Reality: Momentary muscular failure is necessary for stimulating the body to change. Without it, you give the body no reason to grow and improve. Build more resilience so you can tolerate more work, not less. Make training to failure an integral part of your program.

Myth #6: Do Nothing but Train

When not in the gym, ectomorphs were told to conserve as much energy as possible for recovery and growth. No bike rides, no walks in the park, and certainly no spontaneous sports activity.

The Reality: If you are eating properly, there’s no reason you can’t partake in a few pick-up games when you want to. You won’t shrivel up and die. Besides, what kind of life would you lead if all you did was lift and then act like a couch potato for the rest of the day? Live your life, stay active, and you can still build muscle.

You must keep those numbers climbing. Your reps and weights should always be on the upswing, or you’ll never make your goal. Progression is the glue that holds the universe together. Without constant progression, you’ll just keep standing still. Do it at all costs!

The Reality: Your body is not a machine. It will ebb and flow just like everything else in life, and your progression in the gym is no different. Adopt a big-picture outlook on your progress by looking at how far you’ve come over months, not days. You’ll have good days, great days, and bad days. The important thing is to stay consistent.

Myth #8: Pull Back the Throttle

Fear of destroying a hardgainer’s recovery is the resonating theme these myths. It was thought that too much intensity, along with too much weight or frequency, would simply cripple the 97-pound weakling.

The Reality: Intensity is needed and downright required for you to achieve any increases in muscle mass. Intensity is the driver of muscular failure and, subsequently, progress in the gym. Without it, you’ll just be spinning your wheels, stuck in the same spot day after day. 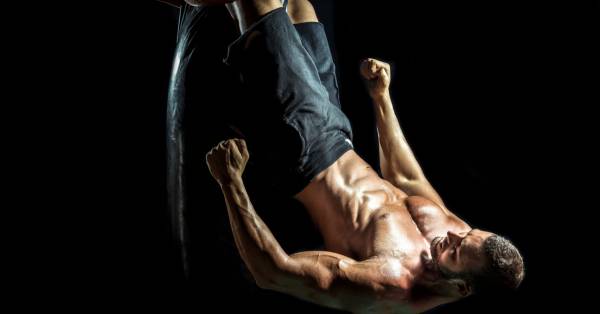 Myth #9: Eat All the Things

The classic ectomorph myth was that you must stuff yourself with anything and everything. This one, sadly, is still alive and well today. You’re told to eat as much as you want and then some, no matter what the type of food. Since you’re a hardgainer and have an out of control metabolism, you are free to eat however you like, provided that it’s in high quantities.

The Reality: No matter what your situation or goal, the quality of the food you put in your body still matters. Not only do you need to ensure you are getting the correct amounts of macronutrients to grow, but you need to maintain your overall health. Downing a ton of sugar and fat just because it tastes good isn’t optimal. Be sure to get in quality, balanced foods; plenty of protein, complex carbs, and some healthy fats. Being an ectomorph isn’t a green light for daily all-you-can-eat buffets.

Those are just some of the more common myths. Together, they managed to scare a lot of skinny guys into training less, with less intensity and variety, and to adopt a low-quality, glutinous diet. Take heed, hardgainers everywhere! Do not listen to the naysayers; you are much more resilient than you think. Take advantage of your so-called weaknesses and turn them into your strengths.

Ready to get busy getting bigger?

16 Weeks of Workouts for a Big New Year

Starting out as a scrawny 125lb kid at 6’2,” Brad took up weight training at the tender age of fourteen and ended up a 220lb competitive, drug-free, natural bodybuilder several years later.

He now publishes through his blog, and armed with both knowledge and muscle, he has helped countless individuals domestically and abroad.

Brad is a veteran of the Air National Guard and proudly served on several deployments including Afghanistan in 2003. He served a total of 21 years. However, upon coming home from Afghanistan, Brad was diagnosed with Hodgkin’s Lymphoma (2004), an immune system cancer which both his brother and father were survivors of prior. He went through nine months of chemotherapy before a full recovery and eventually found his way back to the bodybuilding stage.

Brad writes for several publications on the subjects of training, nutrition, supplementation, motivation, and everything cool. With a “keep it simple” mindset, drug-free approach, and ability to help people go from scrawny to brawny, Brad’s experience, education, and know-how have influenced people from all walks of life.

Brad has a son with his wife Courtney.