What if I told you consuming something as simple as a beetroot could possibly help extend endurance and improve performance? The supplement world is a crazy world, and I know you, as an athlete, want to do everything you can to optimize training and performance – as long as it makes sense and actually works. Drinking a glass of beetroot juice or consuming some nice baked beetroot is easy and, in my opinion, delicious. It couldn’t hurt, now could it?

What Is Beetroot and Why Is It So Good

Beetroot is a nutrient dense vegetable that has quite a few health benefits attached to it. Vitamins A, B and C; antioxidants beta-carotene and beta-cyanine; folic acid, magnesium, potassium, phosphorous, iron, and fiber are all present in the beetroot.

The pigments in beetroot are known as betalains and there are two color types. Betacyanins, which are vibrant red/violet in color, and betaxanthins, which are yellow in color. Both forms of betalains contain nitrogen and they work as both antioxidants and anti-inflammatories. Beetroot is also jammed packed full of nitrate – this is what will be converted into nitric oxide and that is where we begin.

Nitric oxide (NO) is a powerful vasodilator and is commonly used in supplements to give bodybuilders the “pump” and help with endurance. Nitric oxide is quickly destroyed in the body, though, and its vasodilator effects are brief. Nitric oxide does a lot of things in the body, but in terms of exercise and performance it is involved in increasing blood flow to the muscles, which makes it easier for your power generators, known as mitochondria, to produce energy. It also maintains blood pressure and controls muscle contraction.

There have been quite a few studies done investigating the effects of beetroot on performance and endurance. Most of these studies have involved the use of cyclists. One study using trained cyclists had them consume 500mL of beetroot juice, which equated to 6.2mmols of nitrate 2.5 hours before exercise.3 They then proceeded to do two time trials – a 4km and a 16km ride. In the 4km time trials there was a 2.8% improvement and on the 16kkm time trial there was a 2.7% improvement in time. 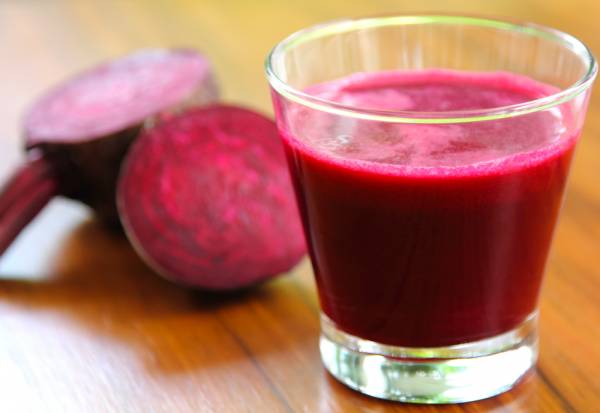 What is interesting is that the cyclists exhibited a 7-11% improvement in power output with no increase in oxygen cost of exercise. Simply stated, they all exhibited increased economy. Plasma nitrite levels increased before exercise with the beetroot juice, also. It should also be noted that resting systolic blood pressure also dropped, while having no affect on the diastolic blood pressure.

This study shows that drinking the juice of a beetroot can help improve performance, but what if you ate the beetroot instead of drinking it? In another study researchers looked at five recreationally fit men and six women in their 20s. The study had the subjects eating either 200 grams of baked beetroot or a placebo (cranberry relish) before completing a 5-kilometer treadmill time trial test. The researchers wanted to know if eating 200grams of beetroot (about 2 medium-sized beetroots) before exercise would have any significant improvement on running times. The answer was yes, and they found that the running velocity increased by 3%.4

A 3% increase in running velocity might not seem like much but that equates to around a 41 second faster finishing time, which over a short distance like 5km is a significant time difference. It is, perhaps, even the difference between coming first, second, or third. It was also noted that like in the previous study the participants’ heart rates didn’t change even though the velocity of their run increased.

So it would seem that beetroot could be the whole food supplement you just might be looking for and, at the very least, with all the added health benefits associated with beetroot consumption it really couldn’t hurt to give it a go. Maybe next time you’re running you too might shave 41 seconds off your time.