Do you have a love/hate relationship with your energy drink? Love the boost it gives you, but not so sure about the ingredients. Here’s some info on what’s inside that little can of energy.

Is reaching for an energy drink to survive the afternoon or start a tough workout really such a good idea? Energy drinks have taken the spotlight in recent news, being accused of serious injuries and even deaths. The media, neon-labels, and enticing slogans popularize the consumption of energy drinks, especially with teens and young adults.

The booming sports and energy drink market has experienced an increase of nearly ten percent in average daily volume sold per capita since 2000.1 The recent dramatic increase in energy drink popularity has brought both attention and scrutiny. Did you know that over the past four years, the number of emergency room visits related to energy drink consumption has more than doubled, with over 20,000 emergency room visits in 2011?2 That is an attention-grabbing statistic if you’re an energy drink fanatic. But, nearly half of them also involved alcohol.3 Eighteen deaths have reportedly been linked to energy drinks, with thirteen involving 5-hour Energy shots and five involving Monster Energy.4 The safety of extremely caffeinated beverages is being questioned as a public health concern. These recent reports have led to several extreme reactions, including an ordinance proposed in Chicago that would completely remove many energy drinks from the shelves.2

Before you trash your energy drinks and have caffeine withdrawals, let’s take a look at the fine print. Insomnia, anxiety, headache, dehydration, rapid heart rate, seizures, and even cardiac arrest have been associated with energy drink consumption. Highly caffeinated beverages used with other stimulants, such as nicotine, or with prescription drugs can over-stimulate the brain and body, causing amplified effects.1 According to Consumer Reports, 400 milligrams per day of caffeine is considered safe for healthy adults.5 The potentially dangerous consequences are more likely to occur with very high intakes of caffeine in a short period of time, since our bodies absorb 99% of caffeine consumed within forty-five minutes.6

Mixing alcohol or stimulants with the beverages intensifies the side effects, including anxiety and rapid heart rate, and may lead to clinically dangerous conditions. Because caffeine can inhibit absorption of some prescription drugs and increase the effects of others, check with your physician or pharmacist for details regarding the safety of your caffeine intake. Existing health conditions, specifically heart and blood pressure abnormalities, may be dangerously exacerbated with significant caffeine intake. A single dose of 200 to 300 milligrams of caffeine slightly raises blood pressure, which can be hazardous to individuals with existing high blood pressure.7 As a reference, one 8-ounce cup of coffee has about 100 to 180 milligrams of caffeine, depending on the brew.4 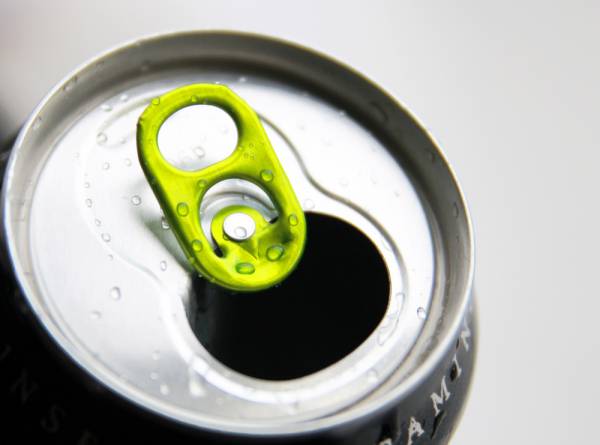 As an avid exerciser, I like to down a quick energy drink at the start line of half marathon races for a last-minute dose of energy. Grabbing an energy drink on the way to the gym is not going to send you to the emergency room. As long as you keep the caffeine at a normal level and don’t have underlying medical conditions, you should be safe from an unexpected ER visit after an energy drink and a workout.

Caffeine is a well-studied stimulant and a common denominator between almost all energy drinks. However, it is not the only ingredient raising concern. Taurine, an abundant amino acid found naturally in animals, is another popular ingredient. Taurine is thought to improve mental functioning and reaction time, but the research is conflicting. Taurine is considered safe up to 3,000 milligrams per day, but the effects of long-term use are unknown.8 Glucuronolactone, a derivative of glucose, is a mysterious ingredient in energy drinks. The potential performance effects of glucuronolactone are unknown, as no human trials can be found.9 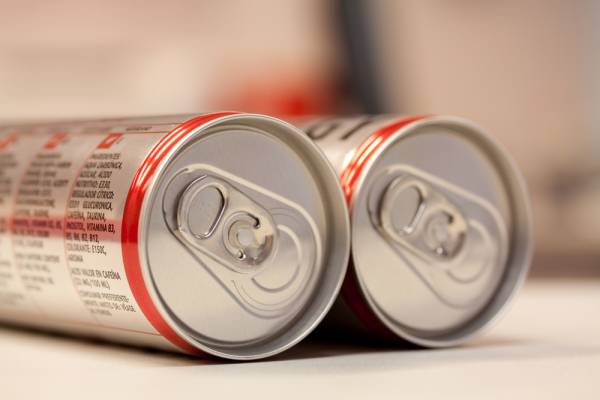 Although the media has grabbed our attention by highlighting the extreme outcomes of energy drink consumption, caffeine is not always harmful. Caffeine is most commonly used to improve energy, and it is quite effective, especially combined with sugar. Even I am guilty of minor caffeine addiction. I am not actually awake until after my first cup of coffee in the mornings. Another perceived benefit of drinking caffeinated beverages is increased metabolism. After consuming 200 to 350 milligrams of caffeine, healthy adult men have an average of 4 to 11 percent increase in metabolic rate, and women have an even higher increase of 10 to 23 percent.6 This effect of caffeine has become a weight loss tactic, but may not be effective since many highly caffeinated beverages are also packed with extra calories.

Energy drinks, especially in sensible amounts, seem to be safe. But, as the intake increases, so does the risk for undesired side effects. The Food and Drug Administration is conducting an in-depth safety review of energy drinks this spring, so further insight on the potential harmful effects of energy drinks is expected. If you’re an energy drink addict, don’t ditch all of them just yet. As with most things in life, moderation is the key.

1. Sohyun Park, Stephen Onufrak, Heidi Blanck, and Bettylou Sherry, “Characteristics Associated with Consumption of Sports and Energy Drinks among US Adults: National Health Interview Survey, 2010,” Journal of the Academy of Nutrition and Dietetics 113, no. 1 (2013): 112-119.

6. “What Are the Thermic Effects of Caffeine Use?” Academy of Nutrition and Dietetics Evidence Analysis Library, accessed January 19, 2013.

7. “What Evidence Suggests a Relationship Between Caffeine Intake and Blood Pressure in Healthy and Hypertensive Adults?” Academy of Nutrition and Dietetics Evidence Analysis Library, accessed January 19, 2013.