Have you ever wondered why so many great minds think core training is so important? But while they might think the core is important, they disagree on how to work it.

In one corner of the exercise industry you have the group who say that just doing any exercise is really a core exercise as the body is forced to brace and stabilize to safely lift weights. These people shun additional assistance work for the midsection believing that it is already hit hard enough during all other training. In the other corner you have the guys who suggest that the midsection is the vital power link for everything that goes on and that we need to make sure it is strong and enduring to cope with all the forces placed upon it to excel athletically.

“A + B + C = D. D is your goal – either an athletic performance or a level of body fat. A is an upper body movement. B is a full body movement. C is abdominal work.

When I increase B, either by max lift or increased volume, I’ve noticed D improves. Therefore, dropping B is universally bad…Generally, increases in A have some effect on D, but it’s more difficult to see the value.

Which leads us to C. Increasing ab work doesn’t seem to help us with the goal…

Why do abs? According to Dane Miller, when you drop C, A and B go straight to hell, which we already know is going to impact D so fast it’ll make your head swim. In other words, abs support your training goals as much as they support your internal organs. You have to do abs to support your whole training system.” 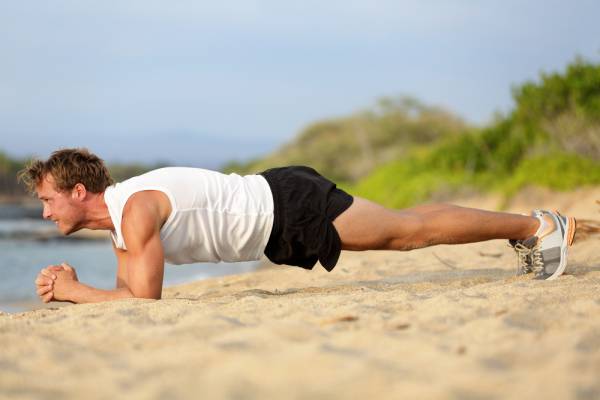 2. Lock the ribs and pelvis together. Remember that the purpose of this exercise is to teach us to create a stiff link between upper and lower body. Letting your ribs and pelvis disassociate is a few steps away for us right now.

3. Tighten the abs and breathe out. You’ll find that as you breathe out you can shrink-wrap your abs to create an even tighter brace. Don’t let it all go when you breathe in, only take short little sips of air, just enough to replenish what you breathe out. In the RKC we call this breathing behind the shield – stay tight and protected. The main mechanism of spine injury is running out of work capacity or strength endurance, not of having not enough maximal strength to withstand a flexion incident. I used to think shorter holds were better until I started digging into Dr. Stuart McGill’s work and then started working longer core holds. My usual drills all last sixty-plus seconds. I spoke to a Navy SEAL a week or so ago about training and he told me he routinely does twelve to fifteen minute non-stop plank holds. Given he has to stabilize his back while wearing a pack for up to 48 hours non-stop, that seems like a good idea. Don’t shortchange yourself with short duration holds.

So that’s the plank – a great expression of static spine stabilization. But what’s next? Well, we need to reintegrate some movement. The push up is an excellent way to start this as it gets the upper limbs beginning to work while we maintain our plank. The goal of the push up, in my opinion, isn’t to make your arms stronger, but to learn to keep your plank position while your limbs move.

After the push up the next step is a deadlift. This is pretty much the same as the push up in that we are holding the upper body still while producing force through the legs, the only other difference is that now we are expected to hold our plank position even though we’ve tipped the trunk forward to about forty-five degrees. 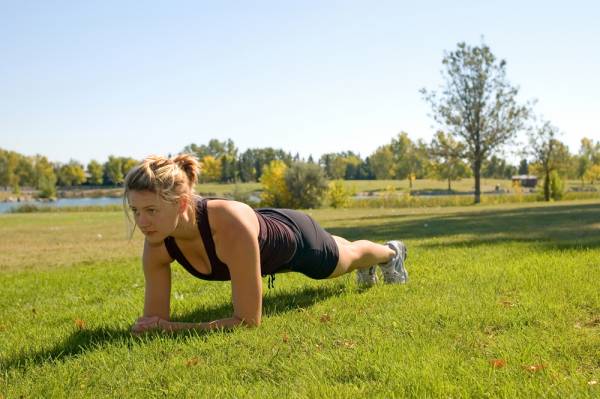 If you’re starting to see how everything is a plank you’re on the right path. You can also see how the people I mentioned at the start of the article, the ones who think you don’t need specialist core work, are kind of right – done correctly every exercise is a test of being able to hold your plank position despite what is going on with your arms or legs or what angle your torso is at.

For me, the next step is farmer’s walks. The farmer’s walk requires you to deadlift the weights up, which is why it comes after the deadlift. We then need to hold the plank while walking. This adds an element of skill because now we’re tensing and releasing alternate sides while still needing to protect ourselves.

This is starting to lead to the kind of reflexive stability that is required to perform any athletic event well. Learning appropriate tension can take people a long time. The second main method of spine injury is incorrect firing sequence of the stabilizers. So it’s not that the stabilizers don’t work, but rather that they come on just a fraction of a second too late. Exercises like the farmer’s walk teach the body how to respond to small changes in the degree of stability needed.

After the farmer’s walks my next go to option is the double rack walk. This is an entirely different beast than the farmer’s walk. It’s hard to describe why until you do it. My gym measures roughly 25 steps in each direction. A few heavy rounds of rack walks make my midsection feel like I was on the receiving end of body blows by the next day. They’re made even more challenging because the weight will sit on top of your diaphragm making it hard to breathe. The great thing about this, though, is that when you learn to use your diaphragm to breathe while under load you’ll actually be freeing up more of your body to work to stabilize your spine. Rack walks are an essential element in core training.

Finally, we get to everything else. Swing, clean, squat, press, run – you name it. The more moving parts there are the more skill you need at holding your plank at the same time. But don’t skip steps. Remember that neglecting core work will directly impact the rest of your training. Make the time for it. Hell, even dedicate whole days to it if you haven’t done any direct core training for some time. Then watch the difference in the rest of your training over the next few months.