Getting older doesn’t mean you have to quit working hard, but it does mean you need to be smarter about how you go about it. Here’s what I’ve learned and what I recommend.

In the book The Celestine Prophecy, James Redfield wrote about how we should notice when life tries to make you pay attention through coincidences. In day-to-day life this could be something as simple as thinking randomly about a friend, having someone else mention that same friend’s name to you, and then seeing that friend in the street. That’s life trying to tell you that this person is important to you right now.

One of the things I have found about getting older is that I am far better at seeing these little clues when they happen and taking action on them. Like recently when I was feeling quite stiff. I read a few different things that all said to go to Bikram, and then I found a studio about five minutes from my work. I signed up on the spot and am now going three times per week and feeling much better for it.

The reason I started feeling stiff and in need of something extra to grease up my movement was because I started to add more “hard” to my training. One of the hardest parts about training is the development of actual fitness, in my opinion. What many don’t realize is that looking good is relatively easy. Simply eat well, lift in hypertrophy ranges, and do enough low-intensity cardio to burn off a little extra fat, and you’ll look great. But actually being fit is harder because there is far more training and food to balance out.

And the older you get the harder that equation is to balance because your ability to absorb the training becomes less and less. The problem with guys like me is that in our heads we still feel like we’re mid-twenties, and once we’re warm we usually feel about that way too. For today, anyway. But the problems start to appear when we ask our bodies to go hard a few days in a row. I can keep up with the younger guys I train today, but it would be doing it again tomorrow that would be hard.

And so when you’re in the middle of a training block that calls for high volume work you need to assess just how much higher intensity work you can truly absorb. The secret with training is not how much you do, but how much you can absorb, and the number is often much lower than people think. As Ian King said to me once, “The number of reps you need is somewhere between one and one hundred to get an effect, and it’s much closer to one than you’d think.”

The same holds true for how many sessions you need in a week as well as how many hard sessions you need in a week. People are often surprised when I get them to start a plan that includes hill repeats or track work with a single interval. My rationale is simple – if we do one and it doesn’t have the desired effect we can always add more. But if we start with a number like five and it doesn’t work, is the problem that we did too many or too few? If we only have one way to go – to add volume – then finding the answer to the volume question is easy. Not only that, but it allows us to get used to the added intensity in slow drips rather than an all-out burst. I’ve seen too many calf and hamstring injuries from adding high intensity running in high quantities too quickly to repeat those mistakes.

One of the keys with training guys like me is to make sure to add one thing at a time. For instance, we don’t add a hill run and a track session in the same week. We also don’t add a hard run of any kind to a new hard workout in the gym. And it’s this frugal management of intensity that allows us old dogs to keep slowly pushing the boundaries further and further out. Remember, that as we age recovery is decreased physiologically via a reduction in our hormone levels. However, the reality is that we also have more things that get in the way of our recovery, like increased pressure at work, kids, and even things to do around the home. The answer for many mature trainees isn’t to train harder, but to train harder less often.

I find the most important thing personally is to move daily. I seem to be becoming like a shark – I have to keep moving. But I can’t train hard that often because I just can’t handle it anymore. There are plenty of ways to mix this up and here a few of my favorite ones:

Make one session into two – Recovering from a long session like a two-hour run is hard. But recovering from two, one-hour runs is much easier. While there are needs to do long sessions, if you’re in a base phase, where one of the goals is to simply perform a skill more, then you’ll get the same effect by splitting your long run into two sessions, and you’ll recover much faster. 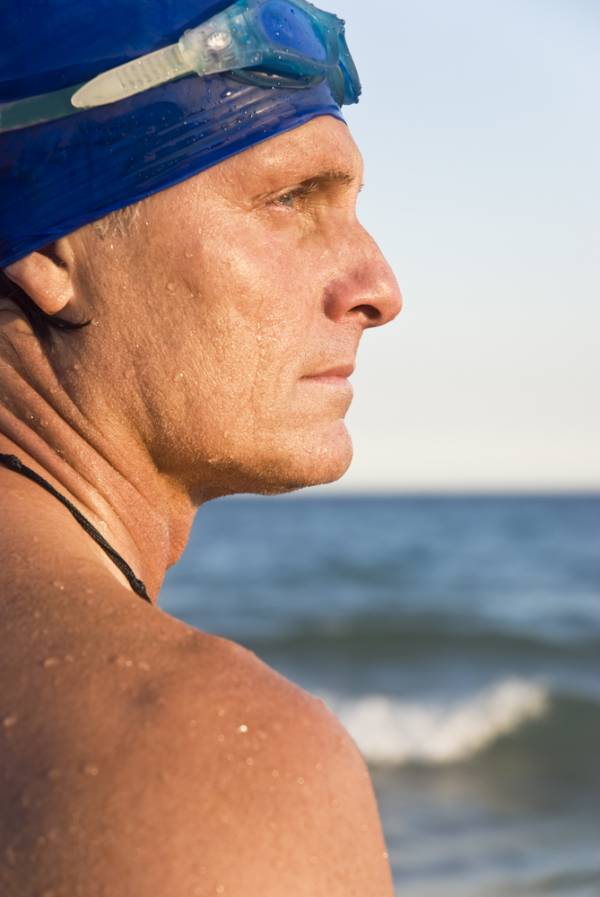 Only one hard session per mode per week – If you are a triathlete, then this means you have one hard swim, one hard run, and one hard ride. Do all the rest of your sessions at a moderate, aerobic pace. If you’re a gym-based exerciser have one really demanding strength session and one really demanding strength or power endurance session (i.e. typical WOD-like training that takes you to the brink). In other sessions you can still train strength or strength endurance, but limit the volume. For strength, instead of multiple heavy sets try a weight pyramid that leaves you with a single heavy set and for circuit type work shorten the circuits to twelve minutes or less. A personal favorite is the Gym Jones “triathlon” – a 500m ski erg, 50cal Airdyne, and 500m row – but split into halves. Doing a 250m ski, 25cal ride and 250m row twice is far easier than doing the whole thing once.

Higher volume, but less intensity – This is difficult to convince people to do, but training more often allows you to use volume to pick up the slack left by having to drop intensity. Near daily training also allows you to constantly practice the skills needed – regardless of whether they are for lifting, running, or even martial arts – while keeping you fresh and able to recover. If the majority of your sessions see you leaving the gym feeling fresh and aroused rather than beaten down and broken you’re on the right path. Still put the peddle to the metal once per week, but once you’ve blown the cobwebs out put it away and let the volume do the work for the rest of the week.