Interview with Emily Kwok: Leading the Way for Women in BJJ

When Emily Kwok first started BJJ there weren’t other women around. After becoming Canada’s 1st black belt woman, she’s now giving back to women and little guys through her camps and DVDs.

Females and little guys in the Brazilian jiu jitsu game are among the most tenacious athletes in any sport. One of the mantras in BJJ is “position before submission” and as a small person, it can be tricky to hold the bigger guy down or to get out from underneath him. You have to be strategic. Creating strategies is where grappling expert Emily Kwok shines and fortunately she agreed to chat with me recently and tell me a little more about her experiences in the game.

Emily Kwok is the first woman in Canada to receive her black belt in Brazilian jiu jitsu and the first to win a world championship. In 2007, when still a brown belt, she defeated black belts at the Mundials to win the gold medal. She was a gold medalist at the Pan Am No Gi Championships in the Absolute division and took home silver in the World No Gi Championships. Emily didn’t stop at BJJ, though. She also defeated her opponents in the cage as an amateur and professional MMA fighter for the Smackgirl organization in Korea and Japan.

Emily has the heart of a champion and she proved it in what she considers to be her favorite match against Stacey Cartwright in the quarterfinals of the ADCC in 2007. Despite short notice, injury, and illness, Emily stepped up and left it all on the mats. Said Emily:

I knew this was a huge opportunity and when I arrived, I fought my heart out and amazed myself and my friends. I had pretty much run my gas tank out five minutes into the match and fought on pure will into overtime, where I lost. My head instructor was nowhere to be found and a teammate helped corner me. So in a way I felt that in that match I gave it my all. I often wish I could tap into that feeling more often. It’s a hard place to get to, and mental will is, I think, the biggest thing to be concerned about in a match at that level.

Unfortunately we don’t really hear much about female fighters regardless of their accomplishments. What made Emily a household name in the BJJ world was her collaboration with Stephan Kesting in the widely acclaimed How to Defeat the Bigger Stronger Opponent instructional DVD set. The first video I saw before the set was released was one in which she taught the “Idiot Sweep.” It was a simple sweep but I still watched it a few times. When I got to class that night, I tried it on a big beefcake white belt who used to beat the crap out of me all the time because I was a blue belt. It didn’t matter that I weighed 80lbs less than he did; tapping a blue belt is still tapping a blue belt, right? Turns out the Idiot Sweep worked on him so I was eager to learn more.

In this male dominated sport, Emily was concerned about how well the Bigger Stronger instructional would be received. Kwok says of herself and Kesting, “I think we both knew it was a bit of a shot in the dark to see how receptive people would be to a DVD led by a female, but the market has grown and diversified so much in the last ten years we figured it was worth a try. I am personally so grateful for the open mindedness and gracious reception we’ve had.” 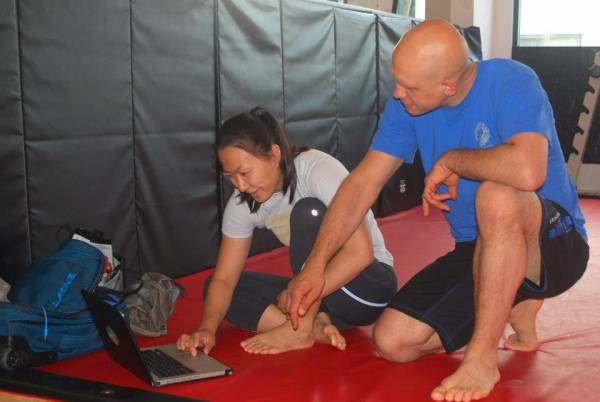 The third DVD set, Kwok explained, is geared for no gi grappling. “We had really positive feedback after the first set, but some people wondered why there wasn’t any no gi included. We intentionally geared the first series towards gi only because there was a lot of material to cover and thought it would be better to focus a separate DVD for no gi instead of cramming it into one.”

For Emily there were no DVD sets. She had to learn to fight the big guys the hard way:

In the beginning, I don’t think there was much else to do than to just train with everyone that you could, which meant that sometimes my partners were close to double my size. In a class of two or three people, you can’t really pick your partners. Coming up through the ranks, I wasn’t very intelligent about my own safety because I hadn’t figured out that being squashed by a 240 pound man, who was better than me, and had no mercy on a beginner wasn’t helping my game much, and I didn’t have people to tell me this was a bad idea. 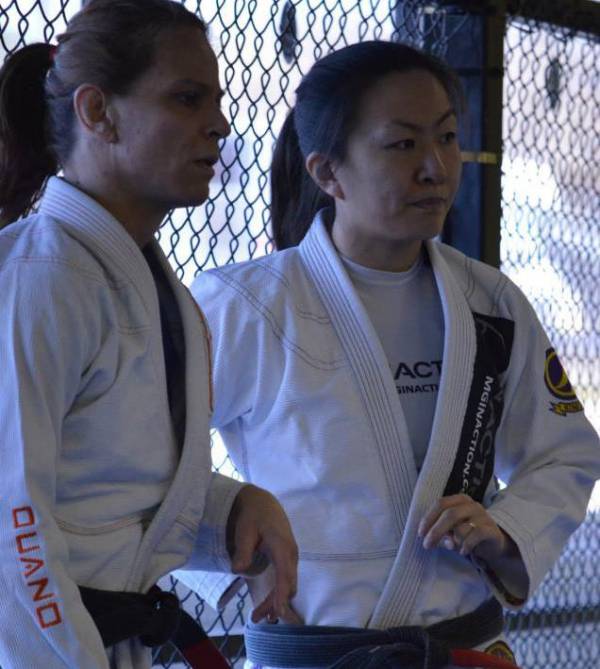 Now Emily is sharing what she learned in her school of hard knocks through her DVD sets with Kesting and by facilitating women’s training camps with her friend and fellow competitor, Valerie Worthington. Her greatest achievement in this regard, Kwok says, is “meeting all of the tremendously talented and interesting women around us who train. Relating to women who otherwise feel alone, or discouraged, on the verge of quitting who come back camp after camp, year after year, and thrive.”

As I did with Stephan Kesting, I ended my interview with Emily by asking her about her favorites:

After hearing her answers, I am convinced that Emily and I would be BFFs in real life. Totally.

At this point in her BJJ journey, Emily is under the guidance of World Champion and ADCC Champion Marcelo Garcia in New York City. She is also an instructor at Princeton BJJ in New Jersey, so if you get the chance be sure to stop in and see her.

To read my full interview with Emily, download the PDF here.