Programming for the American (Clean and Working) Weightlifter

Here are four weeks of weightlifting programming. Two weeks of a conditioning phase and two weeks of a strength cycle. This is how I program for my athletes.

Many of today’s American Olympic weightlifting coaches hold degrees in exercise science, having studied biomechanics, exercise physiology, and other sports science subjects with the intent of practical application to our sport. Unfortunately, many college kinesiology or exercise science programs do not specifically address strength sports. Instead, the majority of research is directed towards physiology of conditioning and biomechanics of more popular sports. The result is that the Russian training manuals have become the cornerstone of many coaches’ education. My development as a coach was largely influenced by these manuals. Additionally, I had several coaches of different nationalities, including Hungarian, Bulgarian, Russian, and American. They all added significantly to my practical education.

Not able to find any one system that I preferred or felt superior to another, I, like many other coaches, started the trial-and-error practice of programming using basic principles borrowed from the likes of Vladimir Zatsiorsky and R. A. Roman. The simplest of the concepts being progressive overload training, which I learned via my formal education but in practice from John Coffee. This has been overall basis for my programming.

I have also borrowed suggestions from Roman’s The Training of the Weightlifter, in which he suggests training phases of two to three months each. He starts with the preparatory phase, to create a base sporting form. This lasts one to two months and is the cycle characterized as having large volume with a gradual increase in intensity. I usually refer to this phase as the strength conditioning phase and will typically build the load for five to six weeks before lowering. Roman then suggests a transition phase, in which the coach must avoid overtraining the athlete, while maintaining sporting form. As suggested, I use this cycle to raise intensity while maintaining the condition of the athlete.

Then, this is the point at which I introduce the Bulgarian wave method into the program. I usually refer to this second cycle as a strength phase since there are more high intensity lifts attempted, and there has been a transition from lower intensity-high volume work to higher intensity work with a lowering of volume. In the third phase, which Roman calls the competition phase, there is a gradual transition with a goal of a “realization of results.” This is typically called a competition, pre-competition, or power phase, where there is an attempt to have the athlete recover from both the volume and intensity of the previous cycles so that he may perform in competition. The product should be an “improved organism” that can produce better results on the competition platform. Roman also suggests rest after four months of training. I too think this is important in prevention of injury and for both mental and physical recovery of the athlete.

The Challenge of Clean Athletes

Although I attempt to implement principles borrowed from both Bulgarian and Russian systems, I have to also acknowledge one deficiency in the American athletes that I train – they are clean. I think to ignore this obvious difference between my athletes and those who have trained in the aforementioned systems would be a failure on my part to recognize the truth. I have worked to alter and adapt the programs to address the lack of performance enhancing drugs and the benefits that would come from them. 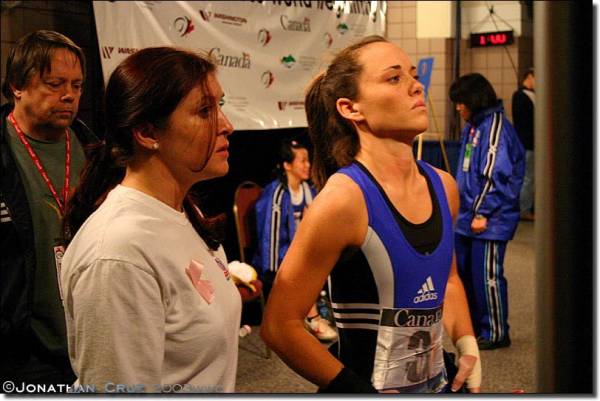 In general, if performance-enhancing drugs will make you stronger and better able to recover, we can assume that without them these two areas will suffer. My adjustments to programming therefore include overloading the pulls and squats to make athletes stronger. Second, my athletes train four to five days a week since most work a full-time job and train. Without recovery aids being used regularly, I must rely on their natural abilities to adapt to the various stresses of training and life. I do advocate adaptogens as part of their supplementation but these, although somewhat effective, pale in comparison to the recuperative qualities of banned pharmaceuticals. In response to this difference, I have reduced the number of training sessions from the norm of nine-plus sessions a week down to four or five.

Here are samples programs from the conditioning phase. These are the working sets and the athlete does warm up to these percentages. The weights, reps, and sets are written in the standard international form with % as the numerator and # of reps as the denominator with the numbers of sets to the right.