Surprising research shows longer races might be safer and less damaging to athletes.

The growing popularity of ultramarathons has created a new opportunity for researchers, giving them access to a pool of subjects willing to push the limits of human performance under conditions of extreme fatigue and sleep deprivation. Studies of ultramarathon participants have, unsurprisingly, shown that they sustain significant amounts of muscle damage. Less intuitively, though, such studies have also shown that the damage appears to plateau, and longer distances are not necessarily more damaging than shorter distances.

A team of French, Swiss, and Italian researchers studied 25 male participants in Italy’s Tor des Géants.1 Possibly the world’s most difficult single-stage mountain ultramarathon, the TdG covers 330 kilometers (about 205 miles) with about 24,000m (about 78,700 feet) of elevation change. The record finishing time is about 76 hours, and participants are capped at a maximum time of 150 hours. As a single-stage race, rest and recovery time count against a participant’s total time. Runners typically suffer from substantial sleep deprivation in addition to the physical demands of the race.

Because the race is so long, the brief time needed to take blood samples and perform other measurements was not a major contributor to participants’ overall time, and researchers were able to test athletes at the midpoint of the race as well as before and after. At each point, researchers measured the maximum voluntary contraction force of the knee extensors and plantar flexors, as well as central and peripheral nervous system responsiveness. They tested blood samples for creatine kinase and other markers of muscular damage and inflammation.

Of the 25 participants, fifteen finished the race. Nine of those had measurements taken at all three opportunities. The researchers themselves served as the control group, subjected to sleep deprivation but not to the race itself.

Both the mid-race and post-race results indicated significant muscle damage and maximum voluntary contraction force loss. Peripheral nervous system response was unaffected, while central nervous system response deteriorated. Based on their own findings and previous research, the researchers believe that impairment of the excitation-contraction coupling mechanism is the primary contributor to neuromuscular fatigue in such extreme events. These effects were not seen in the control group, confirming previous work showing that sleep deprivation has little effect on neuromuscular response. 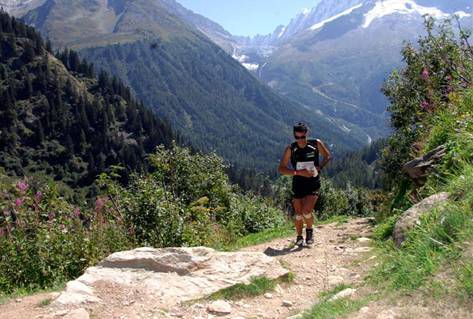 Next, the researchers compared their own results to a similar study of participants in the Ultra-Trail du Mont-Blanc (UTMB), a race about half as long as the TdG over similarly challenging terrain.2 They found that runners at the midpoint of the TdG had suffered less muscle damage and neuromuscular fatigue than UTMB finishers, even though both groups had completed similar distances at that point.

The difference, they believe, is due to difference in pacing strategy. The mean flat terrain-equivalent speed over the TdG distance was 5.5±2.8 km/h (3.4±1.7 miles/h), compared to 7.2±1.3 km/h (4.8±0.8 miles/h) for the UTMB. Thus, the rates of eccentric contraction and joint loading are lower, reducing the rate of muscle damage. Indeed, TdG finishers had lower creatine kinase levels than UTMB finishers. The longer distance, with more elevation change, was actually less damaging for participants.

Few athletes participate in events requiring continuous effort over several days. Nonetheless, the drop off in muscle damage with reduced intensity, even with extremely high duration efforts, may have implications for recovery and rehabilitation protocols beyond the ultramarathon world.