Rush Club: a Peek Into the Functional Fitness Underground 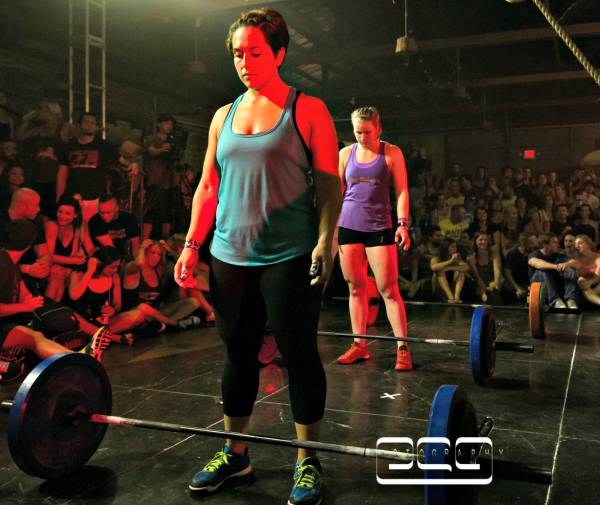 Two competitors get ready to throw down on stage for the audience.

Part fight club and part functional fitness on a premier stage, the events can only be described as a spectacle in the greatest sense. From the athletes’ entrances (similar to an MMA bout) to the high-quality venues that offer a unique atmosphere for the patrons, this promotion is about to take the world by storm.

What Is Rush Club?

You haven’t heard of Rush Club before? Well, you might have heard of a few of these names that have graced their stage: Josh Bridges, Noah Olsen, Sam Dancer, Jon Pera, Elisabeth Akinwale, and Camille Leblanc-Bazinet. Within a little over a year, this small organization has showcased some of the best athletes in the functional fitness realm.

This is how Rush Club works:

With some of the names mentioned above, it is no easy feat to become the champion of any division. But beyond their stats and resumes, what draws the audience is following the athlete’s stories as they get ready for their bouts. In the weeks leading to each event, Rush Club features the athletes through their social media accounts. The audience gets to see the athletes at the weigh-ins the day before the event and at the press conference. And that’s what makes the format so unique. Rush Club is a one-of-a-kind experience due to the athletes being the center stage attraction.

“Part fight club and part functional fitness on a premier stage, the events can only be described as a spectacle in the greatest sense.”

Yes, the workouts are grueling and tough, but it’s more about the stories and the personality of the athletes. Although many different functional fitness competitions have heats of many athletes competing all at once, Rush Club is distinct in having only two athletes featured at a time. I can’t help but remember rule number five of Fight Club: “one fight at a time.”

With each match building to the main event, it highlights the athlete’s progression to the title bout. Because the “card” is built just like a MMA card, each event highlights several weight classes divided between men and women. Once an athlete wins a match, they are eligible to move up in the rankings of their division. And when an athlete goes on a winning streak, it makes it possible for them to challenge for the title.

The Sunglasses and the Beard

The Rush Club environment helps athletes show their personality and unique physicality. When looking at the athletes, we see distinct characteristics. Some athletes just have the x-factor. For example, look no further than Kawika Henderson. Sporting his iconic sunglasses, stylized beard and broad smile, he is easily noticed wherever he goes. Following him on social media, you can track his progress on his pizza diet. (Seriously, go check out his pizza diet. You will see just as many pictures of his food as his training regimen.) 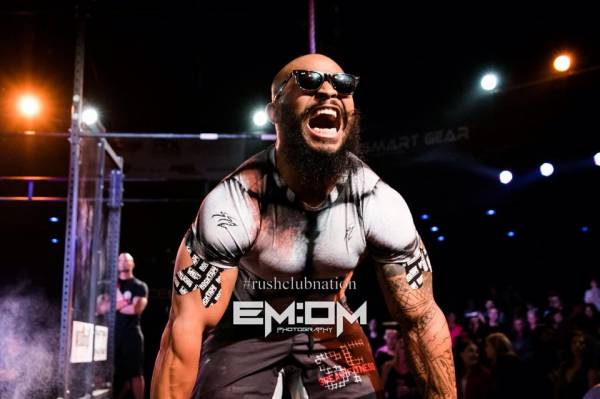 I asked him about his training for the competition and he said, “I’m test running a program called Barbell Empire. The program is really based on lifting heavy every day. Its emphasis is on: how do you feel that day, proper form, increased muscle endurance. I do a metcon every day.” Kawika also has had a left shoulder injury, but he trains smart by always incorporating mobility, stability drills, and strength exercises in his workout regimen.

Throughout the competitions, we get to witness the highs and lows of each athlete. Every fan of sports loves to see the hero rise from the ashes, and with Rush Club, we get to see this up close and personal. Kawika was the first heavyweight champion in the men’s division, but at Rush Club 003 he came into the competition as a replacement athlete with less than a week’s notice. And the man he was set to face off with was none other than Jon Pera, a multiple CrossFit Games competitor.

With less than six days’ notice and coming back from the flu, Kawika gave the match his all. Although he did not win in the match, he was given a lot of credit for coming in on short notice and giving such a great performance by everyone – from the athlete he went up against (Jon Pera) to the crowd cheering throughout the entire event and the CEO AJ Richards.

Kawika told me that not only is he excited about competing again, but with a full month to prepare, he’ll come back stronger than ever. And after seeing him throw down a few weeks ago during the CrossFit Open (improving his position more than one hundred spots over the previous year) and qualifying for the nationals in strongman, I know the sky is the limit for this athlete.

On the flipside, Rush Club showcases a female heavyweight champion who couldn’t be different from former college football player Kawika. Her name is Sara Urban, and I can see why she has so many fans. Without either a high school or college sports background, Sara came in and won the Rush Club belt. 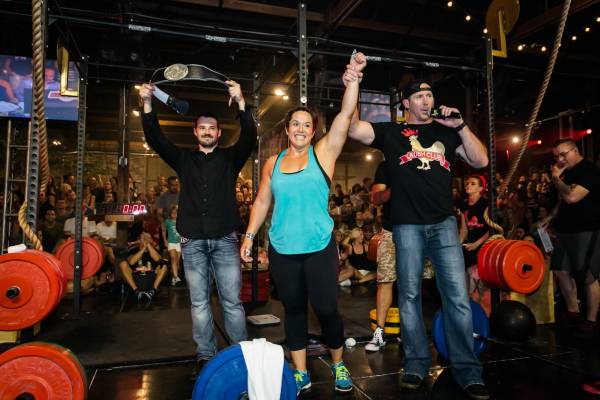 Underdog Sara Urban came out of nowhere to win the Rush Club belt.

Sara mentioned to me that she didn’t initially have plans to compete. “I started doing CrossFit to get in shape. I didn’t play division I sports or anything like that. I was 260 pounds and I did it for my health.” Since she is now competing, Sara keeps a balanced view of her weight and nutrition. “I keep an eye on it, I’m conscious of it, but it doesn’t control me,” she told me.

When asked if she changes her training with the upcoming competition in mind, she responded:

Not really. My coach William Black, [husband of Shannon Black, an athlete from DC Brawlers] has me doing Olympic lifting three times a week and conditioning three times a week. I do think about the cycle time, but I don’t do the workout [announced for the match] at max effort. I go through the order of the motion, though. My goal is beyond just going through the motion: not full capacity, but definitely full effort.

Sara said she might do portions of the next workout that was announced for Rush Club, just to test drive the feel of the event, but she always puts a special emphasis on strength. “Strength will prevail. Everybody can run. Not everyone can move weight proficiently,” she said.

“Yes, the workouts are grueling and tough, but it’s more about the stories and the personality of the athletes.”

Outside of the competitive matches, there’s a strong camaraderie among the athletes of Rush Club. Sara related one her funniest memories when she was hanging out with the other athletes: a spontaneous donut run at the first event, driving in a van with Sam Dancer and Nikki Carlin. She described thinking back and wondering what the staff of the donut shop thought of all these buff people rolling up to a donut shop, ransacking it, and rolling out. Even when they’re not in competition, these athletes are true teammates, and they have a bond that comes from supporting each other throughout the event.

The Spirit of Competition

And that’s why it’s great to see each athlete come out of the tunnel and onto the match platform. All the hard work and practice done behind the scenes, in basements, and in garages throughout the months build to this moment when they perform under the lights. That’s what’s it all about.

And when you see the athletes waiting, in the calm before the storm, ready to pick up their barbells, it makes a smile spread across your face as you get a glimpse at what some of these athletes put themselves through in order to become the Rush Club heavyweight champion.