Strong is strong. According to the Oxford dictionary, strong is “having the power to move heavy weights or perform other physically demanding tasks.” It describes a physical ability. Incidentally, it’s also a word I like to use interchangeably with awesome, but that’s another story altogether.

Skinny is skinny. According to the Oxford dictionary, skinny is “unattractively thin,” which is at odds with the Urban Dictionary definition of “something a lot of girls want to be. Otherwise known as perfection.” Either way, I think we can agree that skinny is used to describe a body composition or aesthetics, not that body’s physical abilities.

When I first heard the saying “strong is the new skinny,” I was pretty excited. I was thrilled that we were finally going to start celebrating bodies, and particularly women’s bodies, for what they could do rather than how they matched up against whatever ideal they were supposed to look like. Appreciating physical feats of strength rather than purely aesthetics seemed like such a healthy, and long overdue, approach. I had visions of women admiring one another for how many chin-ups they could do, or how much they could squat, rather than what size jeans they could squeeze their skinny-fat butt into (oops…did I say that?!). And perhaps finally the capabilities of our bodies would rein supreme, and we’d all start exercising, resting, and fuelling appropriately to support our amazing bodies.

But how wrong I was

Someone in the Facebook marketing department (I figure that’s where all these motivational posters originate) got things a little confused and perhaps read it to be “muscles are the new skinny,” because they started attaching the slogan to a bunch of photos of fitness models who were probably too dehydrated and calorie deprived to lift much more than their own body weight at the time the photos were taken. Now, I’m not saying that some of the women that this slogan has been used to describe are not incredible athletes, possessing both determination and amazing bodies, nor am I saying they are not strong. But, I’ve never come across a photo of four-time world Strongwoman winner Aneta Florczyk (pictured below) or powerlifting world record holder Becca Swanson with the slogan superimposed, so what gives?

Instead of attaching the slogan to pictures of women accomplishing genuinely impressive feats of strength, most of the time the slogan is attached to a model with little body fat and showing more muscle than your average woman, as a way to represent strength. But in doing so we’ve simply replaced one aesthetic ideal of “skinny” with another of “lean and muscular,” and come up with a new reason to obsess over instead of celebrate our bodies.

So while I’m definitely happy that we’ve shifted the focus away from everyone trying to be skinny, because that usually translates to women trying to survive on as little food as possible and spending hours doing cardio when they could be using their body for fun stuff like practicing handstands or dancing. I’m less than impressed that we’ve simply replaced skinny with another ideal. I think we missed the point! 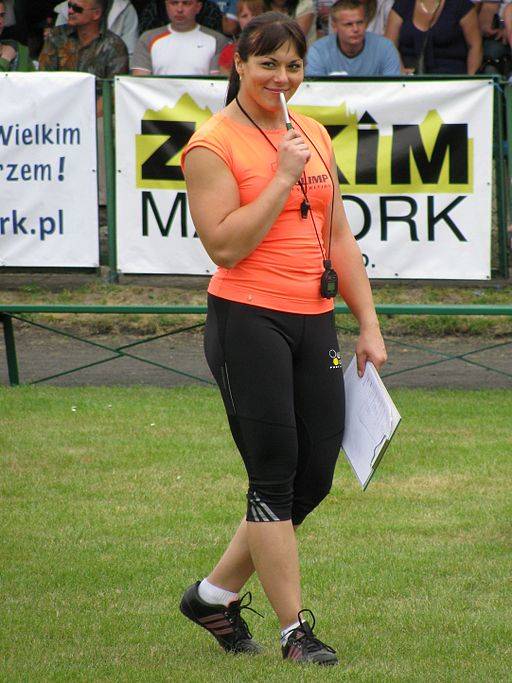 Skinny is okay. Some women naturally have low body fat and little muscle mass (while doing little cardio, eating plenty, doing handstands, and dancing to their heart’s content). Some of these women are also pretty amazing athletes.

Chubby is okay. Just because someone doesn’t have a rippling six-pack doesn’t make her unhealthy or unfit. Some women feel and perform better with a little bit of extra fat on their bodies. Some of these women are also pretty amazing athletes.

Muscular is okay, too. Some women put on muscle easily and naturally have low body fat. It doesn’t make them manly, or fitness fanatics, or any better or worse than the skinny girl on her right who can run laps around her on the track or the chubby girl who can back squat the both of them. No surprise here, but some of the muscular women are pretty amazing athletes, too.

And while I personally use the word strong interchangeably with “awesome,” I also think flexibility, endurance, and balance are also pretty cool too (although I was endowed with a little less of these of these variants of awesome, so I’m a little biased towards strength) – and this is what we should all be celebrating! Of course our body composition is important, both from an aesthetic and performance perspective. We all want to look as amazing and healthy as we feel, but “amazing and healthy” comes in many shapes and sizes.

My wish for everyone is that we focus on movement and celebrating the amazing capabilities of our bodies, and that we get out there and lift, run, jump, swim, handstand, dance, and enjoy. Strong is still strong, and skinny is still skinny.